Racist school closings met with days of protest in Chicago 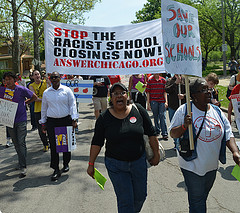 On May 22, the Chicago Board of Education carried through on its threat to close the largest number of schools in U.S. history. The vote directs  the closing of 49 Chicago public schools, targeting the city’s Black and Latino communities.

The vote followed many days of protests that mobilized teachers, students, parents, community members and progressives, who marched on the South and West sides of Chicago. ANSWER Chicago (Act Now to Stop War and End Racism) joined with members of the Chicago Teachers Union, public school children and parents, bringing a large banner reading “Stop the Racist School Closings Now!” Many dozens of activists were arrested in the days leading up to the board’s vote, and tens of thousands went to Chicago School Board meetings to voice their opposition.

Four schools that were on the chopping block were spared.  One of the schools spared, Marcus Garvey Elementary at 103rd and Morgan streets on Chicago’s South side, was defended by one of its students, 9-year-old Asean Johnson. Johnson gave an impassioned and stirring speech at a downtown demonstration condemning Mayor Rahm Emmanuel for targeting schools in communities of color, declaring, “This is racism right here!” A YouTube video of his amazing speech quickly went viral.

This devastating blow by the millionaire mayor and the Chicago Public School board has been perpetrated under the guise of cutting and consolidating “underutilized schools.” But all evidence shows that these racist massive school closings will help no one but Emmanuel’s big business constituents who hope to feast like pigs at the trough on the absurd profits to be made through the privatization of Chicago’s public school system.

Lawsuits have been filed by parents against the decision based on the racially discriminatory nature of the closings as well as the adverse effect on special-needs students.

We must continue the fight against the racist assault on public education in Chicago and all over the country. In the face of such daunting adversity and arrogance on the part of the mayor and the CPS board, the resolve to struggle must not be shaken. It was struggle that brought about public education in the United States, and we must continue the fight to defend it.

What is the lesson of the largest public school closings in history, of the escalating assault on the right to education, especially for the poorest among us? The time for a nationwide mass mobilization to save public education is now.