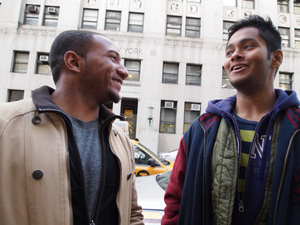 In an unprecedented move, the CCNY students "were handed over to the District Attorney's office" according to attorney Ronald McGuire, who spoke at the rally and represented Khalil and Tafadar at Tuesday's arraignments. Previously, the administration told these students they would have to halt all their political activities in order to be reinstated. When the students refused this deal on principle, the CCNY administration retaliated by taking them to criminal court.

Please take a moment to show your support to the students by writing a letter to the District Attorney of Manhattan and the CCNY administration, via email and/or fax, demanding all charges be dropped.

The two students turned themselves into Manhattan Criminal court Monday night and were arraigned the next morning, being charged with several misdemeanor charges that could land them up to a year in jail. According to CCNY officials, both students were suspended and banned from campus for "almost inciting a riot," but in reality the suspensions by the administration were political and meant to have a chilling effect on the growing student movement. The message sent to students by the administration was that, no matter how peaceful, militant struggle would not be tolerated and furthermore would be met with the full force of repression from both CUNY and local law enforcement.

Khalil and Tafadar are leaders in and work alongside different CUNY student groups and movements. They have played leading roles in the demonstrations against the illegal raid and seizure of the Guillermo Morales / Assata Shakur Community Center at CCNY and the protests against the appointment of Gen. David Petraeus as “professor” at CUNY this fall. As many of the speakers pointed out at the press briefings before and after the arraignments, the real crimes of Khalil and Tafadar is the resistance they have put up against a University administration bent on militarizing and gentrifying a historic NYC public institution that is supposed to serve the poor and oppressed communities of the city.

Hands Off Khalil and Taffy!

Liberate CUNY for the people!