Students and academic workers rally for change at SU 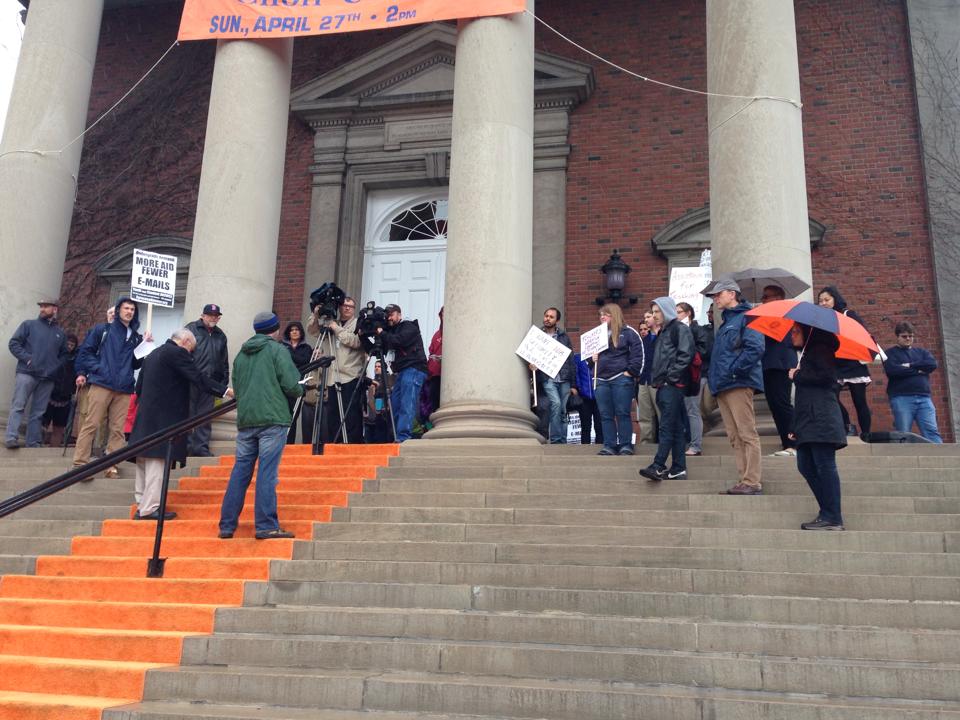 On April 29, the last day of classes at Syracuse University, around 50 undergraduate and graduate students, adjuncts, staff, teaching assistants and professors came together in solidarity at Hendricks Chapel to rally as part of a nation-wide week of actions to struggle against student debt, rising tuition and the increasing exploitation of academic laborers. The rally was organized by the Labor Studies Working Group and supported by the SU branch of Youth and Student ANSWER, amongst others.

The anger that is felt amongst students and academic laborers is more than justified as the university system becomes progressively subsumed under corporate rule. Those who own and control the economy see the education system as a factory for producing suitably trained workers so they can make maximum profits at minimum costs. In turn, those in charge of colleges see higher education as a way to generate profits.

One of the speakers at the rally was Jessica Posner, an adjunct faculty member at SU. She laid bare the high rate of exploitation of adjunct labor: “As an adjunct, I get paid $3,455.89 per class I teach. Based on the published $40,380 yearly tuition; as Syracuse University students, you each pay about $4,038 per class you take. International students pay more. I taught 56 students this year, and Syracuse University made about $226,128 from my labor. I earned $17, 229.45. This is a net profit of nearly $209, 000 for the University based solely on my labor as an adjunct teacher. Now, I understand that tuition goes to more than instruction; and that many of you receive deserved scholarships. But if you are one of my students, 87% of the tuition you paid to take my class is going somewhere else. For larger classes, an even larger percentage is going somewhere else.”

As tuition rises for students and as more academic labor is performed by part-time and adjunct professors, rather than by higher-paid and secured tenured professors, students begin to question where their money—which they are forced to borrow—is going. Their money is increasingly funding administrators and functionaries, who are concerned with bottom lines, not quality education. Nation-wide students are becoming more conscious of their debt they collectively are in together, which reaches over 1 trillion dollars.

Collin Chambers, an undergraduate student representing Youth and Student ANSWER, told the demonstrators: “The student debt crisis is not only economic, but equally political.” Forced to spend more time and energy working in order to pay back loans, youth and students have less time and fewer resources to commit to social change, he told the crowd. The government is expected to earn $715 million in profits over the next 10 years from interest on student loans. Chambers made the important link between student debt and imperialism. The money that is extracted by the U.S. government is spent on imperialist projects, such as the financial funding and support of the reactionary Syrian rebels who, not so coincidentally, fight a government that provides free higher education for its people.

Demonstrators made it clear that this action marked the beginning of a new movement on the campus, one that will be part of a broader, nation-wide struggle against oppression and exploitation.