Demonstration in D.C. demands an end to the "War on Drugs" 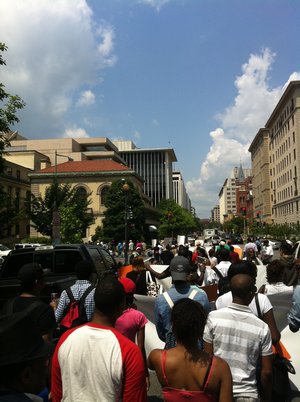 On Monday, June 17 demonstrators gathered in Washington, D.C., from all over the East Coast demanding an immediate end to the "War on Drugs." Initiated by the Institute of the Black World 21st Century, the protest was convened to draw attention to, and stimulate further action on, the immense devastation that has ravaged oppressed Black communities as a result of mass incarceration policies. The march and rally also drew significant attention to the scourge of unemployment in the same communities, making clear the links between poverty and “criminal” activity.

The day began with a rally at the historic Metropolitan AME Church in downtown Washington, D.C. Metropolitan AME has a long and distinguished history and was notably attended by Fredrick Douglass, Ida B. Wells, A. Philip Randolph and numerous other distinguished fighters for Black equality. Further, the national memorial service for Rosa Parks was also held at Metropolitan.

Opened by Dr. Ron Daniels, president of IBW 21st Century, the rally heard a variety of speakers, including the Rev. Ronald Braxton of Metropolitan AME and the Rev. Kelly Wilkins of Covenant Baptist Church, one of the most historic churches in Washington, D.C.’s, southeast quadrant. This neighborhood is one of the areas’s most affected by mass incarceration, poverty and unemployment. The rally also heard a powerful speech from Karen Garrison of Families Against Mandatory Minimums, who is also the mother of two sons unjustly incarcerated. She has since become a powerful advocate against draconian sentencing. The rally featured a keynote address by the Rev. Jesse Jackson.

Speakers from a range of organizations and cities, including Pittsburgh, Baltimore, New York City and other areas, addressed the crowd. Some of the speakers included the Rev. Lennox Yearwood of the Hip Hop Caucus, noted Hip-Hop artist Jasiri X, Dr. Marvin Cheatham, and the Rev. Willie Wilson of Union Temple Baptist Church, another historic church in southeast Washington, D.C.

Speakers and attendees unanimously agreed that what was most critical was for there to be continuing movement against the truly criminal "War on Drugs" and the rebuilding of America’s neglected and exploited oppressed communities. In several cities, organizations that both endorsed and attended have formed local committees to continue the struggle and plan future events.