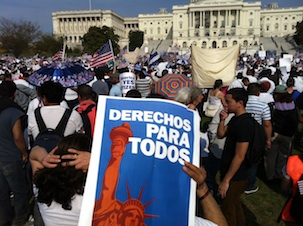 As deportations continue to mount, and immigrants continue to be detained and their families separated, all eyes are on Congress to see whether it will pass any type of immigration reform in coming months.

In late June, the Senate added a notorious “border surge” amendment (the Corker-Hoeven Amendment) to a reform bill that would provide a pathway to citizenship and immigration protection for many undocumented people, but also leaves millions waiting for papers. The amendment would add an estimated 20,000 border patrol agents, increase drone usage and otherwise significantly expand militarization of the U.S.-Mexico border.

The House of Representatives has rejected the Senate plan in favor of a "piecemeal approach" to immigration reform. Yet no piecemeal approach could satisfy the core demands of undocumented workers and immigrant families for justice, equality and an end to the terror of detention and deportation.

The oppression of immigrants has a broad impact on women. Approximately 3,200 people in immigration detention are women. These women are frequently denied access to critical medical care and are separated from their children and families. Abusers deny undocumented women partners access to immigration assistance and papers, using the immigration system as an additional tactic of abuse. Deportation and detention have a devastating impact on women around the world who depend on remittances from family members in the United States to survive. Undocumented and immigrant women in the United States struggle with poverty, access to resources or health care, isolation, employer abuse and much more.

Currently 70 women are on hunger strike in Eloy detention center in Arizona protesting the jail’s inhumane conditions. They issued demands calling for their own release and the release of nine detained immigrants known as the DREAM9. The Dream 9 have now been released thanks to the tireless work of activists like these women. Eloy is owned by the private prison company Corrections Corporation of America (CCA). It is known for its use of solitary confinement and brutal medical neglect of immigrant detainees. Two immigrants committed suicide in the facility in March of this year. One hunger striker, Thesla Zenaida, explained the reason for her participation in the hunger strike: “They [treat] us like the worst dogs.”

We must wage the struggle for legalization and full equality for immigrants on the streets. In 2008, it took only three weeks for the President and Congress to draft and pass the “emergency” bank bailouts. Immigrants have been struggling since 1986 – the last large-scale comprehensive legalization program – for an overhaul of the immigration laws. While the politicians act immediately for the banks, they tell immigrants to endure life-shattering family separation while patiently waiting for immigration reform.

We cannot tie ourselves to the reform promises of the Democratic or Republican parties, which fall a day late and a dollar short. After all, the Democratic Party has presided over the largest deportation machine in U.S. history under the current Obama administration, outpacing every prior administration in deporting immigrants by deporting immigrants at a rate of approximately 1,000 people per day.

Come out to the White House August 17 at 12:00 p.m., raise your voice and show that all people are united in the demand for immigrant rights!