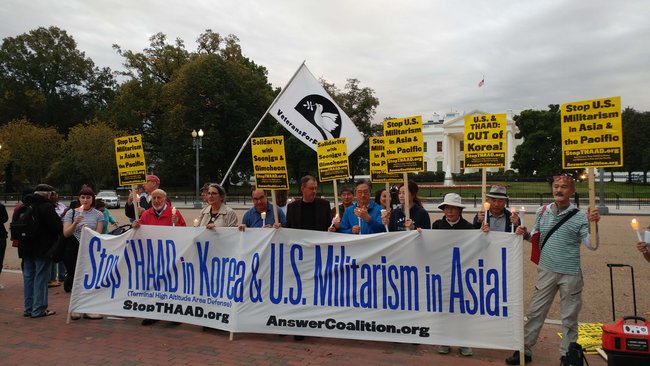 The ANSWER Coalition condemns the entry ban imposed on Juyeon Rhee, the coordinator for the Stop THAAD in Korea (STIK) peace delegation. We urge all our supporters to demand her release by sending e-mails to South Korean President Moon Jae-in. Below is a sample e-mail and instructions for sending.

Re: Lift the Entry Ban on Juyeon Rhee Immediately

I am writing to strongly protest the ban imposed this morning on Ms Juyeon Rhee today at LAGuardia Airport, New York,  preventing her from boarding her Delta flight to Incheon. The ban was imposed by South Korean officials.  Juyeon Rhee is the coordinator for the Stop THAAD in Korea (STIK) peace delegation visiting your country and hosted by the National People’s Action to Stop the Deployment of THAAD in South Korea (NPA).  The STIK delegation includes prominent peace activists Jill Stein, 2016 U.S. presidential candidate for the Green Party, USA, Medea Benjamin, founder of CODEPINK, Reece Chenault, National Coordinator for U.S. Labor Against the War, and Will Griffin, Veterans for Peace and STIK.

I am deeply troubled by the actions of your authorities to prevent Juyeon Rhee from entering your country especially in view of the welcome promise of your administration to seek peaceful and negotiated settlements to longstanding conflicts and to recommit the nation to open dialogue and respect for democratic processes.  Ms Rhee has demonstrated a life-long commitment to the desire of all Koreans for a peaceful resolution to decades of conflict and to U.S. policies that respect the sovereignty of the Korean people and value equally the human needs of all Americans.

Please be sure to include your affiliation with your signature and your email address, if possible.  It will strengthen your message.