Rasmea responds to travesty of justice: ‘I am strong!’ 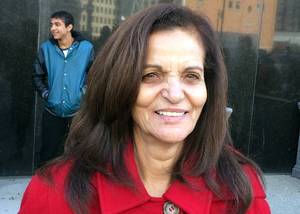 On Nov. 10, after just two hours of deliberation at the Detroit federal courthouse, a jury decided that Rasmea Odeh, a Palestinian American community leader, is guilty on one count of unlawful procurement of naturalization. Rasmea faces up to 10 years in prison and could be deported.

The defense is going ahead to file an appeal of the verdict after sentencing.

Both the prosecution and the defense teams were informed by Judge Drain that the jury had wanted to meet with them after the announcement of the verdict; however, the jurors only met with the government attorneys and never asked to speak with the defense.

“That’s the kind of jury we had: they were kept ignorant of 75 percent of our defense and then they didn’t even want to hear from us at the end,” told Michael Deutsch, lead defense attorney to the crowd of supporters outside of the courthouse after the verdict.

The jurors were not allowed to know key information including Rasmea’s torture, rape and extreme interrogation by Israeli military forces in occupied Palestine that lead to her forced confession in 1969 and later imprisonment. Rasmea has suffered from PTSD and that was also not permitted to be known by the jurors.

This key information was suppressed by the judge despite the fact that Rasmea’s testimony heard by the United Nations about her torture in an Israeli prison is well-known as well as the fact that she was released in a highly publicized prisoner exchange.
Rasmea lifted the spirit of her supporters when she told them “I am strong,” and vowed to continue the fight for her freedom and for Palestine.

The racism and bigotry of the U.S. court system seeped out in every event of the trial. Besides the suppression of key events leading to Rasmea coming to the U.S. legally 20 years ago, Judge Drain commented on the verdict in a move that is almost unprecedented, saying, “I don’t normally comment on verdicts, but in this case I will: I think it’s a fair and reasonable one based on the evidence that came in.”

As was previously stated, the evidence that “came in” was tightly controlled by Judge Drain—a judge who could have been sitting with the government prosecution.

Rasmea’s trial, like all trials in the United States, shows that the racist and biased court system has no basis to try oppressed and working people, just as Israel has no right to steal the land of Palestine from its indigenous people. As the struggle grows and continues, not only can justice be won in cases like this, but movements can rise to do away with the entire system whose only goal is to carry out oppression and exploitation.