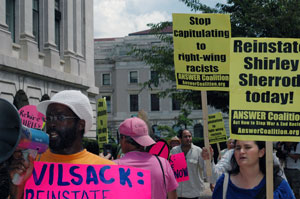 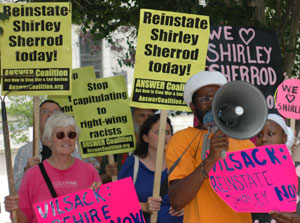 Demonstrators gather in front of the USDA, Washington, D.C., July 21.

A spirited demonstration took place this morning in front of the U.S. Department of Agriculture denouncing the forced resignation/firing of Shirley Sherrod by Secretary of Agriculture Tom Vilsack. The demonstration included the ANSWER Coalition, Code Pink, the D.C. Statehood Green Party and others.

The following is a statement issued by the ANSWER Coalition that was distributed to workers in Washington, D.C. in front of the Department of Agriculture.

When they forced the resignation of Shirley Sherrod, the Obama administration officials cravenly capitulated before the false charge of “anti-white” racism leveled against an African-American federal worker by right-wing political forces.

The facts of the case show that Shirley Sherrod, a USDA employee, should be reinstated immediately. Her forced resignation should be understood as a “firing” of a career civil service worker for blatantly political reasons.

The hysteria generated by the right wing against Shirley Sherrod is based on a false interpretation of video of Shirley Sherrod’s speech to the NAACP conference.

The heavily edited video falsely suggested that Sherrod had committed what the right-wing bigots considers to be the most abhorrent racial offense: Sherrod, a Black woman, had apparently discriminated against white persons.

The right wing asserted that Sherrod, a worker with the U.S. Department of Agriculture, had once withheld assistance to a white farming couple on the basis of race.

The right wing’s twisted story became untenable when the full video of Sherrod’s speech was released. Speaking at a NAACP meeting in March, she recalled working for a nonprofit that assisted struggling farmers. Sherrod had stayed in Georgia with the purpose of helping Black farmers, but her work with a white couple—to whom she admitted offering only minimum assistance at first—changed her perspective.

In the unedited video of her speech, Sherrod says: “It made me see it really was about those who have, versus those who don't ... Black, white or Hispanic. It made me realize that I needed to work to help poor people ... those who don't have access the way others have.” Since the video was released, the wife of the white farmer in question has come out in support of Sherrod, saying she saved them from losing their farm.

Even as she coped with the very real and palpable racism that had cost so many Black farmers their land in the South, Sherrod arrived at a broader class understanding of social justice through her own experience. But the bigoted elements who trimmed down the video of her speech took no interest in that story.

The USDA's own history of racism

In a July 20 statement, Secretary of Agriculture Tom Vilsack explained why he forced Sherrod to resign: “There is zero tolerance for discrimination at USDA and we strongly condemn any active discrimination against any person.”

Black farmers have been fighting the USDA in court since 1997 for the department’s long-standing practice of systematically denying funds to Black farmers. In Pigford v. Glickman, Black farmers demonstrated that, for more than 15 years, Agriculture Department officials ignored complaints that they were denied aid at the levels disbursed to white farmers.

The case settled for $1.25 billion in 1999, yet many class action plaintiffs have yet to see a dime. Numerous farmers were excluded from the settlement altogether. The federal government has slowed down payments to a trickle—and the fight for the funds continues today.

“I thought that the elderly farmers would get their money and get to live a few happy days of their lives,” John Boyd, President of the National Black Farmers Association, said in an interview earlier this year. “They deserve the money before they leave God’s earth.” Boyd has attended the funerals of several Black farmers who did not live to see justice.

Shirley Sherrod should be saluted

In a country with such a record, perhaps the strongest evidence that racism is alive and well is that the dominant question of the debate over race relations in the media is, “Are African Americans discriminating against whites?”

Shirley Sherrod should be saluted for her lifelong work. She stood up for Black farmers and promoted unity between Black, white, Latino and other working people. She worked, as she said in her video, to help all poor people.

The Obama administration and the Democratic Party leadership shudder in fear whenever the Tea Party and other ultra-right forces go on the attack. Shirley Sherrod was a convenient attack target for the ultra right, and the Obama administration threw her overboard. That’s wrong on every level. We demand the immediate reinstatement of Shirley Sherrod.

Help the ANSWER Coalition continue the struggle against racism and the extreme right! Please make an urgently needed donation to support our work.