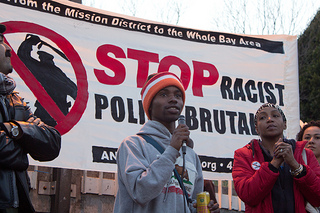 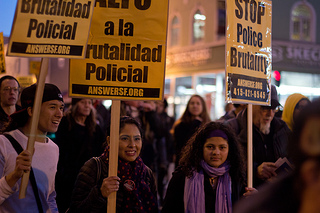 Sign the petition to demand Justice for Kevin Clark!

With a banner reading “From the Mission District to the whole Bay Area—Stop Racist Police Brutality,” over 300 community members rallied against the most recent case of police violence in San Francisco. The event was prompted by a video that became widespread showing 18-year old CCSF student, Kevin Clark, being brutalized by two SF police officers.

The heinous assault was carried out in broad daylight at the busy intersection of 24th and Mission St. BART plaza.  The video shows Clark peacefully walking down the street when a police motorcycle drives onto a crowded sidewalk in an attempt to run Clark over. Another cop jumps off his motorcycle, tackling Clark and throwing him face down onto a sewer grate in the street. As one cop pushes Clark’s face into the grate, the other twists his arms in a “compliance hold” and handcuffs him.  Outrageously, the SFPD charged Clark with “resisting arrest” without ever saying why he was initially being arrested.

With only three days notice, a wide range of organizations, community groups, and individuals rallied around the demands to drop the charges against Kevin Clark, fire and charge the SFPD officers who brutalized Kevin with assault, and release the police report on his attack. Organizations and individuals on both sides of the Bay (see list of endorsers below) came together to show the cops that we will not be silent in the face of police violence in our communities. Students and youth of color from John O’Connell and Balboa High Schools, and City College of San Francisco, the college Kevin is currently attending, showed their support in large numbers.

Cephus Johnson, the uncle of Oscar Grant, whose murder at the hands of BART police in 2009 was captured on cell phone video, told the crowd, “I want to thank all of you for pulling out your video cameras and recording what happened to Kevin.  That is so important because if that had not happened on January 1, 2009 no one would know who Oscar Grant is... So anytime you see a young woman, man, child being accosted by the police, take a moment out of your life, stop,  pull out your camera, stay at a safe distance, and stay ready.  We gotta start shooting back with our video cameras.”

Jack Bryson, a Justice 4 Alan Blueford Coalition organizer whose son was with Oscar Grant when he was murdered said, “It is a blessing that [Kevin Clark] is alive, because at any moment that could have turned the other way and he could have been murdered... That's why we've got to stop these police officers from doing what they do.”

Fly Benzo, an organizer from the Bayview, a predominantly African-American neighborhood with a long history of police terror, said, “They tell [African-Americans] we're not qualified [for employment].  Well, when they let us off the boat the only qualification we needed was that we made it.  Just still being alive was the only qualification we needed to work for free.  But now... we have to pass drug tests or whatever just to get a job in our own communities…” This powerful statement led to chants of “We want jobs and education, not mass incarceration!”

The message of the rally was strengthened by the speakers who dealt with a broad range of issues affecting poor and working people, especially people of color, in the Mission and San Francisco. ANSWER Coalition organizer Gloria La Riva said, “We are so fed up with seeing the cops pull young people off the bus because they don't have the money and putting them in handcuffs... I've lived in the Mission for 32 years... this place is ours.  The rents are now $2700 a month.  And there are a whole lot of people who I see getting off the BART now who I've never seen before and they can pay that rent.  And I want to tell them, 'You know, you can move here, but you've got to take our side. You can't just go to those expensive restaurants and ignore the rest of us.  You've got to stand up for us too.' This gentrification is the crime, but the cops are criminalizing the poor.”

From police harassment for fare evasion on public buses—the enforcement of which cost the city millions of dollars of much needed transit funds—to the constant harassment of Latino street vendors who have to work in constant fear of the police confiscating their goods, to the fight back against “stop-and-frisk” and taser laws, the speakers spoke out against the general assault on the most oppressed communities in the supposedly progressive city of San Francisco. The important presence of the East Bay anti-police brutality movement showed that San Francisco does not face this fight alone. There is a growing Bay Area-wide movement willing to come together to push back against the police.

Kevin Clark addressed the crowd, saying “I didn't think this would have this big an effect on the community, but it looks like it's made a huge impact so I just want to thank everyone for coming out and supporting me and for all the work that ANSWER and the other coalitions have been doing to get this event on the road and everyone knowing about it.  So thank you and hopefully we can fix this and make the streets safer and people won't have to worry about the police harassing them.” Marcela, a former teacher of Kevin’s from CCSF, described him as an excellent student and a genuinely caring young man.

With an exaggerated police presence surrounding the participants, the disciplined and organized march shut down two lanes of the busy Mission Street chanting, “SFPD, Stop Police Brutality” and “No Justice, No Peace! No Racist Police!” The demonstration was supported by people in cars, on balconies, and those walking home from work. Many joined the march. It was clear that the resentment towards the police in the Mission was widespread and that people needed an outlet to express their grievances.

Arriving at the Mission and 16th St. BART plaza, the march was greeted by crowds waiting at the MUNI bus stop. An ANSWER speaker connected the message of support for Kevin Clark to the support of the community by stating, “Every day you wait at that bus stop, you know you fear for your safety when cops get on to harass you for your bus ticket. They treat you like a criminal if you cannot afford to pay the $2 fare. We are here to say stop the intimidation of our community.”  The organizer continued, “Everyone in the country is talking about gun control, but no one is addressing the guns in the hands of the cops, the ones who are actually perpetuating the violence.”

The night ended with a community speak-out in front of the 17th and Valencia St. police station; the station where a bruised and bleeding Kevin was taken to be cited and eventually released. Sabrina, a high school student from Balboa High School asked, “How are we supposed to trust you and say you are here to protect us, when all we see is you beating and harassing us?” Forrest Schmidt, a member of the ANSWER Coalition and a key organizer in the police brutality movement, connected the movements for social justice and asked everyone to get involved, “The police have charged Kevin with resisting arrest and are accusing him of being a criminal. The video shows that the cops who attacked him are the real criminals. We're here tonight to build a Kevin Clark Movement to bring these racist police to justice.”

The action was covered extensively in the media and has set the stage for future organizing by Kevin Clark and his supporters. It is clear in the video of the police assault that the only assailants and violators of the law were the cops who will justify their brutality against youth, people of color, and all poor and working people by using their media mouth pieces to slander the public image of their victims. They did this with Oscar Grant, Kenneth Harding, Alan Blueford, Ernest Duenez, Mario Ramiro, Ramarley Graham, Sean Bell and countless others whose relatives continue to speak out for justice. Now they are trying to do the same to a young man by the name of Kevin Clark, who, unlike the previous victims, is still standing. The movement will stand in his defense.

Sign the petition to demand Justice for Kevin Clark!