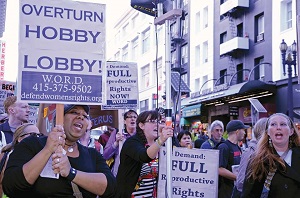 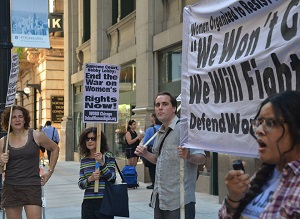 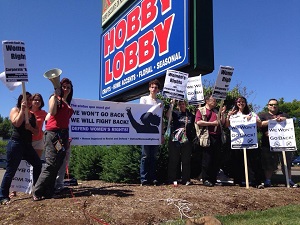 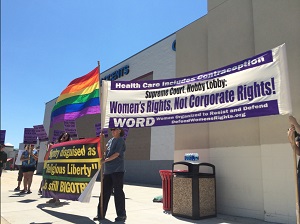 On July 3 – 13, WORD chapters all across the country organized protests demanding that the Supreme Court overturn its decision in Burwell v. Hobby Lobby Stores, Inc. The ruling prioritizes a corporation's "religious freedom" over an employee's right to health insurance coverage, including coverage of contraception.

No employer should have the right to deny women their rights to make decisions about their health and well-being, including their reproductive health. The misleading words "closely held" are used by the court to describe Hobby Lobby, but in reality obscure the breadth of their decision. Hobby Lobby is not some small family-owned, religious-based business. It is a giant crafts store with 500 outlets and 16,000 employees. Not one of those 16,000 workers should have their health decisions undermined or negated because of the owner's beliefs.

On July 3, dozens of supporters of women's rights came out to Powell and Market Streets to denounce the Supreme Court decision that an employer's religious beliefs trump a woman's right to health care. The message of the crowd was clear: this is a continuation of the vicious onslaught on women's rights that has been growing especially bad over the last few years, and we refuse to stand idly by as our rights are chipped away.

People spoke on the mic to stand against the ongoing war on women, demand the need for abortion on demand, and to declare that contraceptive access IS vital health care for women. Another important message was the importance of people being in the streets to force concessions and win rights.

Participants marched from the rally site around San Francisco's busy Union Square chanting: "2- 4-6-8, the church and state don't ovulate!" and "Every generation has an obligation to women's liberation!" Marchers received cheers of support of many along the route, including at least one worker who said she had been waiting for someone to stand up and fight against the decision earlier that week.

The event was a united action called by WORD, Stop Patriarchy, CODEPINK, SF NOW, and the ANSWER Coalition (Act Now to Stop War and End Racism).

A courageous group of over 100 Albuquerque residents lined the busy street in front of a Hobby Lobby on July 7. The group was formed not only of women and families throughout the city, but with the help of WORD, NOW and Personhood for Women, among others. The signs were mostly handmade, very witty and representative of frustration at Hobby Lobby, the Supreme Court, capitalism, the disproportionate rewarding of some religions over others, and the residual effects that this ruling will have on other marginalized groups.

It is no surprise that so many women and allies showed up remind Hobby Lobby that their decision reaches far beyond their tight-knit religious family. This attack on women's reproductive rights comes just eight months after Albuquerque stood up and said a fierce and resounding NO to the anti-choice ballot brought into the city by the notorious group Operation Rescue. The proposed ordinance intended to stop abortions at or after 20 weeks. However, women and families from all over the city poured in to vote and defeat the ban.

In Chicago, on July 10, WORD organized a picket at the offices of one of the Hobby Lobby co- plaintiffs, Lindsay Rappaport and Postel, and across the street from the Thomas More Society, which provides legal services for two other Chicago co-plaintiffs, Ozinga and Triune Health Group.

Activists chanted and demanded that the decision be overturned, as it is an immediate attack on women's health and reproductive rights.

Protesters picketed at the site of a future Hobby Lobby in North Seattle on busy Aurora Avenue (Highway 99) on July 13. Holding a banner condemning the Supreme Court's Hobby Lobby decision and signs stating "Contraception is healthcare," the protest was greeted with honks of support from many passing cars.

Annette had searched online to find a protest. She hadn't attended any demonstrations in years, but the Supreme Court's decision had outraged her and she felt compelled to take action. A man in a wheelchair across the street called out, "I am a Christian and I am against what they [Hobby Lobby] are doing." A young woman took a handful of fliers to distribute at Aurora Commons, a resource center a few blocks away.

On July 5, a group of protesters gathered in East Haven to picket a Hobby Lobby store. Protesters assembled in front of the giant Hobby Lobby sign next to a busy road. Holding signs reading "Women's Rights – Not Corporate Rights!" and "We Won’t Go Back – We Will Fight Back!," the group chanted loudly and was met by approving honks and waves from numerous passing cars. Shoppers pulling out of the parking lot stopped to hear about the Supreme Court decision and what can be done to fight back. One shopper disclosed that she had just been in to Hobby Lobby to return everything she had recently bought there after hearing about the decision.

The protest recognized that the Hobby Lobby ruling was not a single bad apple – it was part of a broader, toxic tendency of right-wing attacks on women's and workers' rights across the country, a tendency which can only be met with militant fightback against sexism throughout the system. Maria, a Connecticut woman and worker who attended the rally, said: "I've been very angry about this Supreme Court decision. Since 2012, there have been 200 bills to regulate my body and not one about my husband's."

IV, a WORD organizer, said "Already, in the immediate wake of the Hobby Lobby ruling, religious companies have put in requests to be exempt from laws against anti-LGBTQ discrimination. This is setting a precedent that will allow for racism, sexism, homophobia and transphobia to be protected for bigoted bosses to come."

During the early afternoon on July 5, activists convened outside of a Hobby Lobby located in Laurel, Md. to stand up and demand justice for women. The protest quickly grew, as women passing by were motivated to join the action.

The protest was met with overwhelming approval from those passing by, women and men alike. Among the attendees were a delegation of hearing impaired women, who said they joined the protest to show solidarity with the struggle for health care for all women. WORD activists kept up the energy by leading the chants and alerting the public that this demonstration extended beyond calling for equal health care rights for women who worked at Hobby Lobby, but to uphold further demands such as a living wage, affordable housing, and childcare for all women, who face intensified oppression.