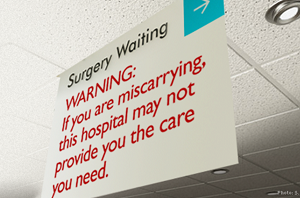 When we speak of women’s access to reproductive health care, we think of abortion and contraceptive access. But there is more to the full range of reproductive care to which women should have the right: quality and accurate sex education; contraceptives and the morning-after pill; abortion care; elective sterilization; appropriate care during miscarriage and stillbirth and pre-natal and post-natal care. The battle for each of these is not over yet.

While our attention has been focused (rightfully so) on the battle for abortion access for women in Texas (and around the country), another legal battle is taking place for access by those who have been turned away from full reproductive care at Catholic hospitals.

Recent reports show that one in six hospital beds in the U.S. are in a Catholic-run facility, and in some states it is more than 40 percent. At least 10 of the 25 largest hospital systems are Catholic-affiliated. While the number of church-sponsored or affiliated hospitals have increased by 22 percent in the last 15 years, the number of all types of non-profit hospitals or publicly owned hospitals have dropped. These facts are not necessarily a problem in and of themselves. But it is a problem because all of these hospitals are required to abide by the religious directives written by the United States Conference of Catholic Bishops. These directives stipulate that hospital workers are not allowed to dispense contraceptives, conduct or recommend abortion or pregnancy termination or provide direct sterilization.

These rules become a big problem for women because even wanted pregnancies do not always go smoothly. There can be complications, sometimes resulting in miscarriages. The last year has seen multiple lawsuits filed by the ACLU across the country for the trauma experienced by women who have been denied the care they desperately needed.

Doctors have told of women who came in to these hospitals while miscarrying, who needed to have the pregnancies terminated for their own safety. Since these Catholic hospitals are not allowed to induce delivery or perform abortions until there is no heartbeat from the fetus, doctors and nurses could do nothing except “watchful waiting” until there fetal heartbeats ceases. In several cases, women developed massive infections with fevers over 105 degrees F, nearly losing their lives.

Others cases are like that of Mindy Swank who had a miscarriage at 22 weeks. She was repeatedly turned away from her hospital until she started experiencing massive hemorrhaging at 27 weeks and finally received help because it had become a “serious” matter. Jennafer Norris in Arkansas whose birth control failed experienced pre-eclampsia at 30 weeks. Having experienced this life-threatening condition in her two previous pregnancies. she asked her doctor to perform a tubal ligation, (“getting her tubes tied”) when coming in for her scheduled Caesarean section. According to the American College of Obstetricians and Gynecologists, the ideal and safest time for a tubal ligation is after a C-section. But because of the directives, the staff had to tell her she to have the procedure done at another hospital—the closest being 30 minutes away. She was already in extreme pain and warned by the staff that she could have a seizure at any moment, and had to decide that it was too dangerous to move to another hospital.

The most recent lawsuit was filed by ACLU of Michigan. Tamesha Means had a miscarriage at 18 weeks and was denied full appropriate treatment because the only hospital in her county is restricted by the directives of the USCCB. As stated by the ACLU: “Because of its Catholic affiliation and binding directives, the hospital told Tamesha that there was nothing it could do and did not tell Tamesha that terminating her pregnancy was an option and the safest course for her condition. When Tamesha returned to the hospital a third time in extreme distress and with an infection, the hospital once again prepared to send her home. While staff prepared her discharge paperwork, she began to deliver. Only then did the hospital begin tending to Tamesha’s miscarriage.” The lawsuit charges that the directives set by the USCCB are responsible for trauma experienced by Tamesha Means and other women in similar situations.

These dangers and trauma to women are not okay. A woman and her doctor should be able to have an honest discussion about what her medical needs are, and no one should stand in the way of a woman receiving life and health saving care in accordance with professional best practices. Full contraception and abortion access should be available on-demand for those need it. Those who choose to carry their pregnancies should get the best assistance possible throughout their entire term. And should something go wrong, NO ONE should be denied knowledge and access to the full range of options to handle the situation. The religious convictions of men who own and control hospitals should not be allowed to jeopardize the health and well-being of women.