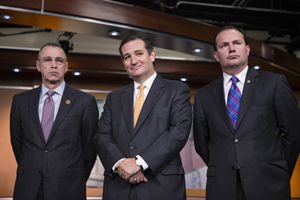 At first glance it may seem strange to assert that the Tea Party, or at least its economic program, has emerged victorious from the government shutdown. After all, no less an authority on Republicans than Karl Rove declared in the Wall St. Journal that Tea Party-led Republicans walked straight into President Obama’s “trap” and strengthened his position. Taking a deeper look at the government’s policy direction, however, shows that the semi-fascist Tea Party has permanently enshrined large parts of its fundamentalist capitalist agenda. From taxes to spending cuts that eviscerate services for the working class and boost the rich, their program has become an accepted part of the bipartisan consensus, with the full assent of President Obama.

The president himself, in his post-shutdown remarks, made this quite clear when he stated that this has not been a “political” fight but instead a “failure in governance.” In other words, Republicans had no need to shut down the government to get agreement on austerity measures — this could have been accomplished instead in the disguise of a “compromise.”

This can be seen clearly in the counter-proposal the Democrats offered Republicans at one point to avoid a shutdown: locking in 100 percent of the sequester cuts. These cuts, which affect the whole range of pro-worker social programs, were originally designed by Democrats to be so extreme that they would force Republicans to the table. Now it is perfectly acceptable for these “unthinkable” cuts be made permanent from the White House’s point of view.

The deal to end the shutdown and raise the debt ceiling points in the same direction. They have established a commission to determine whether the sequester cuts should remain, or be “replaced” by other cuts.

White House references to other budget “savings” is a nod in the direction of so-called “entitlement reform.” Right-wing Republicans and many liberals have been laser focused on the need to start hacking away at Social Security and Medicare, and reduce the potential tax burden on the super-rich. Heaven forbid they have to pay a penny so that the people who made them so rich can have any semblance of a dignified retirement.

Here again the Tea Party’s brinkmanship strategy has facilitated the president’s promotion of Wall Street’s agenda of deep cuts to programs that are important for working and poor people. Without any prompting, President Obama declared before the shutdown he was willing to concede to Republicans the establishment of Chained Consumer Price Index, which is a new way of calculating Social Security benefits that will lower the average payout. This is terrible news for those on fixed incomes, and something previously considered unthinkable in Democratic Party circles.

Many other examples could be cited, but the basic point is this: The Tea Party strategy, while damaging to its brand in the short term, has been extremely successful in locking in their overall agenda. As the 2012 elections showed, both wings of the ruling class — liberal and conservative — were united in the understanding that social programs (“entitlements”) would have to be cut, the only question was whether or not to use the more elegant carving knife, or take the meat cleaver approach. In crudely trying to hack away at social programs, the Tea Party has only made the Democrats’ carving knife seem more “sensible.”

The president has essentially capitulated to the Republicans by offering up giant concessions on spending cuts in attempts to construct “grand bargains” at the expense of the working class. The hard-right understands their only leverage is the collective power of saying “No” to everything the White House puts forward. Their obstructionism, which consistently causes these political crises, serves to set the terms of the debate further to the right — in order to “govern,” the president accepts the rightward shift and, by extension, appeases the Tea Party faction itself.

In retrospect, the focus on the Affordable Care Act was nothing more than a switch-and-bait tactical move. Some of the right wing’s true believers are disappointed that they did not succeed at defunding “Obamacare,” but that was never really in the cards — as the architects of the strategy knew. Obama can claim victory over the Tea Party because he “hung tough.” But the truth is, the seemingly kamikaze irrationality of Tea Party representatives like Ted Cruz shifted the public eye onto the ACA and away from core right-wing priorities like spending and tax cuts, thereby making it easier for Obama to pursue a concessions strategy.

This is why mainstream ruling-class Republicans initially embraced the Tea Party. They hoped that by empowering this semi-fascist movement of petit-bourgeois anger — which largely repackages the core economic program of Wall Street — they could bludgeon elite liberals into much deeper concessions. While the Tea Party has often escaped the control of their puppet masters, and sometimes embarrassed them, their tactical moves in Congress have done exactly what was intended. They have dragged the country further into the realm of unrestrained corporate power, free of encumbrances like unions, taxes and regulation, free to pursue profit by any means, regardless of the destruction this program wreaks on the lives of working and poor people.

For his part, the president has shown himself to be a man of no permanent principles, just the permanent interests of the U.S. capitalist rulers. At no time has he attempted to mobilize the social power of millions of people who are opposed to this sort of destruction of the living standards of working people. This should come as no surprise given that the corporate rulers of our society, even if they find the Tea Party impolitic and sometimes wild, are resolutely opposed to a mass social movement of working people arising in defense of their own interests. What the top corporate and financial bosses desire is an orderly demolition of the gains won by working people in the post-WWII era. This is what the president provides.

Liberal or conservative, Republican or Democrat, no one on Capitol Hill or in the White House is looking out for the interests of the half of society that is in or near poverty — no matter what they say in their stump speeches and grandstanding on CSPAN. The only way to fight the Tea Party, the government and the country’s Wall Street overlords is to build a massive, politically independent movement of precisely those tens of millions of people. That is the only path to creating a new society that puts the needs of society above the needs of the CEOs.