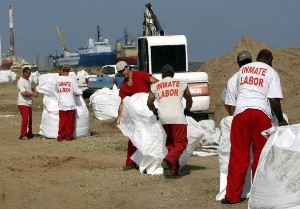 ANSWER organizer Rene Ruiz spoke about John Torretti, a recent victim of police brutality in Sacramento, and showed a video of Mr. Torretti being beaten by the police. The video has spread over the internet and the community has responded with outrage.

"John Torretti was viciously beaten by the police and later died in custody,” Ruiz said. “The city coroner has claimed that Mr. Torretti was not killed as a result of the police's violence yet has so far been unable to explain the cause of Mr. Torretti's death.”

He went on to give an update on the Guantanamo Bay hunger strike, and the impending California prison hunger strike.

Christina Arechiga, of the Justice for Ernest Duenez Jr. Coalition, told the story of Ernest Duenez, her cousin, who was murdered by the Manteca city police. John Moody, the cop who killed Ernest without any reason or provocation, has not faced any punishment for his crime. Instead, he is patrolling the streets and has even received a promotion.

Arechiga showed footage obtained from the patrol car dashboard camera that shows the brutal murder in full. The footage was graphic, moving audience members to tears; some had to leave the room. But the footage only shows bits of the police's violent nature. She said: “Some people say that there are some good cops. But nobody in the Manteca PD has come out against Ernest's murderer nor made any statement against police corruption."

Yeimi Lopez, an activist with Women Organized to Resist and Defend, a national women's rights organization with a chapter in Sacramento, also spoke at the forum.

Lopez described the conditions for women in prison as "dehumanizing and brutal.” She gave figures showing the rising numbers of women being imprisoned and noted the inadequate health care available for women, including during pregnancy. She also described abuses within the prison industrial complex at detention centers.

Lopez told how in these centers people are imprisoned on immigration charges even though the cases are ”low-priority” and should thus not warrant detention. In a call for creative and militant organizing against the system of detention centers, she told the story of Claudia Muñoz, who purposely let herself be apprehended by ICE and sent to the Calhoun County Correctional Facility near Detroit, Mich. Claudia went into the detention center and working with the National Immigrant Youth Alliance documented the abuse suffered by the inmates.

Mallory Fites, from the Party for Socialism and Liberation, talked about the issue of mental illness and the prison industrial complex. Fites explained how the system pushes the mentally ill out of mental health facilities and puts them back into society without adequate support.

The mentally ill are then often funneled into the prison system because of behavior created by lack of health care and social services to support the mentally ill person in their recovery. This release from a mental health facility to detention, Fites explained, creates a cycle that is highly profitable for those running the prison industrial complex.

Fred Gonzales, from Sleep Kills, gave his personal account of experience with the prison industrial complex. He explained how children with parents imprisoned are statistically more likely to do time in jail or prison, and how with every subsequent generation the chances increase.

Gonzalez described how after serving time it is extremely difficult for parolees to find quality and well-paid work, which leads to poverty for those families and often repeated incarceration. Gonzalez then described how the prisoners are divided on the basis of race and nationality. He described the struggle and importance for inmates to unite across racial lines.

Forum attendee Emily said: "I was excited to see such a large crowd. The information [the speakers presented] was a good blend of personal accounts and the larger scope. I felt inspired by everybody who came up to speak. I felt optimistic."