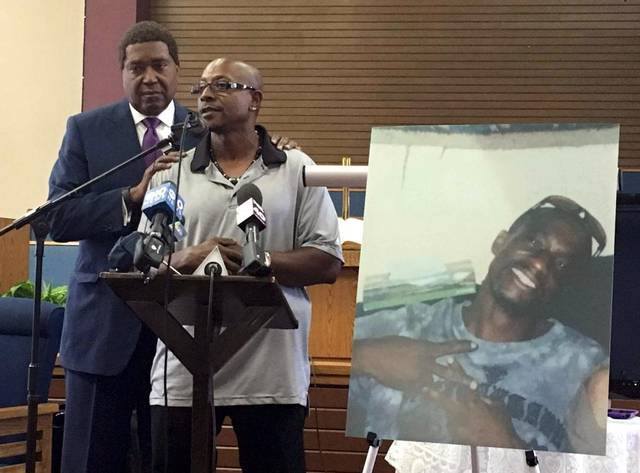 October 22nd is National Day Against Police Brutality. This is also the anniversery of the deaths of Andy Lopez by Santa Rosa PD in 2013 and Adriene Ludd by Sacramento Sheriffs in 2015. This year we will bring attention to the cold blooded murder of Joseph Mann in Del Paso Heights.

On July 11 in Sacramento, Joseph Mann, a 51-year old Black man, was gunned down in the midst of a mental health crisis by officers of the Sacramento Police Department. Over two months later, the city has finally released video footage that shows the wild and erratic police behavior during the incident that left Mann dead. On Sept. 29 enhanced audio further shed light on the cops’ mentality of escalation that led to their killing Mann.

Robert Mann, Joseph Mann’s brother, described him as a good man who would never hurt anyone. His brother said Joseph was 5’4″ and weighed 110 pounds. At the time of his death, he was homeless.

In one of the dashcam videos, one of the squad cars showed up late and immediately accelerated towards Mann after identifying him. At that moment the two SPD officers occupying the vehicle decided to try to run Mann over, chasing him wildly. Twice they nearly struck him before exiting the vehicle and killing Mann with 14 bullets to his body.

Not only were the police excessive in their use of force, but the city also withheld the footage from the family until the City Council had a chance to review it.

Roughly half of those killed by the police are suffering mental health crises, and among the demands of people combating police brutality, is that of better training regarding mental health. On April 14, Capitol Public Radio released a story on this very subject and SPD Sgt. Greg Dieckmann was quoted as saying, “Patience and a mindset of de-escalation are key to creating positive outcomes when police interact with anyone in crisis.” However, it seems this particular rolling death squad was not interested in de-escalation.

Join us as we call for justice for Joseph Mann and all victims of Police Brutality!