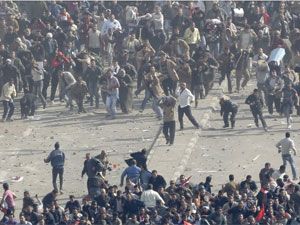 The Egyptian people have done it. A revolution from below, developed without a fully prepared plan and without a formal leadership, has succeeded in forcing the ouster of Mubarak. Even though it was a genuinely spontaneous uprising, the people developed leadership and organization in the course of the struggle itself.

This great uprising by the people of Egypt has shaken the existing global order of imperialism. After all of their sacrifice, millions of Egyptians today are celebrating. All great revolutions become a festival of those who have endured oppression. Each participant knows that the revolution is the deepest expression of the power of the people.

Yesterday, Mubarak defiantly insisted that he would not leave, which the people had expected when they gathered in the hundreds of thousands.

“Downtown, more than 10,000 tore apart military barricades in front of the towering State Television and Radio building, a pro-Mubarak bastion that has aired constant commentary supporting him and dismissing the protests. They swarmed on the Nile River corniche at the foot of the building, beating drums and chanting, ‘Leave! Leave! Leave!’ They blocked employees from entering, vowing to silence the broadcast. Soldiers in tanks in front of the building did nothing to stop them, though state TV continued to air.” (AP, Feb. 11)

The steadfast determination of the youth-led uprising coupled with the dramatic entrance of the Egyptian working class into the mass movement radically changed the relationship of forces.

Having armed and financed the Mubarak dictatorship’s 30-year-long war against the Egyptian people, the U.S. government abruptly shifted its position in a last-minute effort to prevent U.S. imperialist interests in Egypt going down with Mubarak’s doomed ship.

As the regime seemed to be crumbling in the face of the uprising and the mass strike wave, Obama appeared on national television yesterday to announce that the U.S. government saluted the youth-led uprising.

For 18 days, Mubarak’s police and thugs murdered, beat, arrested and tortured thousands of valiant and peaceful protesters—and during that entire time, the U.S. government refused to cut its massive financing of the regime.

Obama and Secretary of State Hillary Clinton refused to call for Mubarak to step down immediately. The senior U.S. civilian officials and the Pentagon’s top command stayed in constant contact with their agent Omar Suleiman, Mubarak’s vice president, and their other agents in the senior leadership of Egypt’s military.

For now, the Egyptian military has assumed the power in Egypt. This is the preferred plan of the U.S. government. The continued presence of Mubarak was accelerating the militancy and radicalism of the uprising. Suddenly, as a consequence of the entrance of the people in a genuine uprising, Mubarak turned into a liability rather than a valued asset.

The main goal of the U.S. government now will be to find a way to sustain the authority of the Egyptian military high command, which has functioned as a client for the past 30 years.

It is too early to know how the ouster of Mubarak will impact the overall struggle in Egypt and throughout the Middle East.

A great victory has been secured. But the institutions of the dictatorship remain and behind them stand the Pentagon and the CIA. Undoubtedly, a new stage in the struggle will quickly unfold. The opening of political space for revolutionary and working-class forces to organize is of monumental importance.

The Israeli Zionist regime is deeply alarmed by the prospect of the end of the dictatorship. Although the Israeli regime pretends to be the great champion of “democracy,” the reality is that it fears the development of a genuine people’s government in Egypt, the largest Arab country that possesses the largest army in the Arab World.

The 1979 Egypt-Israel Peace Treaty, which followed the Camp David Summit Accord, is in fact a complete misnomer. The treaty gave the Israeli military a green light to wage war against other Arab peoples free from the threat of interference from the Egyptian military. In fact, this treaty sidelined the largest Arab army from engaging in any opposition to Israeli war plans against Lebanon, Syria, other Arab countries and especially the besieged Palestinian people. In exchange for the agreement, the United States provides nearly $2 billion to Egypt—most of it military aid—each year.

Youth, workers made the revolution

The young people of Egypt and the mass of the working class have, through their own efforts, changed the political equation.

All revolutions reveal as a dominant and characteristic feature the extraordinary intervention of the masses of people into the historical process. In normal times, it is politicians, heads of state, military leaders, the media, religious figures—all the representatives of the old order—who conduct the business of society, while the masses of people are excluded from the political arena.

By their direct intervention in the historical process through the medium of revolution, however, the people create the foundation for a new social and political regime.

We in the United States and everywhere stand in solidarity with the Egyptian people in the moment of their victory, as we do with the Tunisian people and all those struggling against other U.S.-backed dictatorships across the Middle East. This still unfolding revolution will serve as a school for revolution and social change throughout the globe.