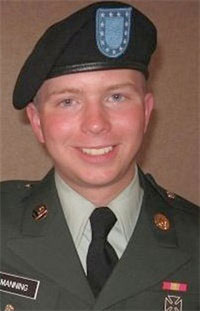 The San Francisco Labor Council has just passed a resolution in support of Iraq war veteran and accused whistleblower Bradley Manning. This important development comes on the heels of a demonstration this past Sunday outside of the Quantico Marine Base in Virginia, where Manning is being held. CNN and other major media outlets gave prominent coverage to the protest, which had participants from ANSWER, Code Pink, Courage to Resist, March Forward!, Veterans for Peace, IVAW-DC and many others.

We encourage everyone who can to introduce similar resolutions in their unions, community and student groups, and religious organizations. If you introduce a resolution, let us know by clicking here and we will publicize it on our website.

The demand for Manning's freedom is gaining momentum across the country, and is a reflection of the growing opposition to the occupation of Afghanistan. Manning has been held incommunicado for months, charged with releasing a graphic video of an attack in April 2007 by a U.S. Apache helicopter that killed a group of journalists and civilians. News reports suggest that Manning may be charged with the recent release of 75,000 documents that paint a grim picture of the occupation.

You can read the full text of the San Francisco Labor Council resolution below. Please help us spread the word about this important display of support for Manning by posting this to Facebook, Twitter and other social networking websites.

Resolution in Support of Bradley Manning

Whereas forty years after the release of the Pentagon Papers, the government is now trying to criminalize, intimidate and repress those who tell the truth about U.S. war crimes in Afghanistan and Iraq, and

Whereas the White House and the Pentagon brass want to send a threatening message to all rank-and-file soldiers who are witnessing or learning of atrocities, and who want to expose both these crimes and the government’s lies about the war, and

Whereas Bradley Manning, a 22-year-old soldier who was stationed in Iraq, has been arrested and has been held incommunicado for months is charged with releasing a graphic video of an attack in April 2007 by a U.S. Apache helicopter that killed a group of journalists and civilians, and severely wounded two children, and

Whereas the video became a major scandal when it was released by WikiLeaks, and

Whereas the Pentagon had refused to release the video of the attack, which had been requested in a Freedom of Information Act request by Reuters news service, and

Whereas news reports suggest that Bradley Manning may be charged with the release of the 75,000 documents that WikiLeaks posted on its website recently. Those documents paint a grim picture of the repeated killing of Afghan civilians in a deteriorating military occupation by U.S. and other foreign forces, therefore be it

Resolved that the S.F. Labor Council oppose the prosecution of Bradley Manning, and further be it

Resolved that the S.F. Labor Council send a letter to President Obama and to our California Congressional representatives and Senators Feinstein and Boxer calling for the release and dropping of charges against Bradley Manning, and be it further

Resolved that the S.F. Labor Council call upon other union locals, labor councils and state and national federations to send letters to President Obama and Congressional representatives calling for the release of Bradley Manning.