Sanctions on Venezuela are no alternative to war — they ARE war 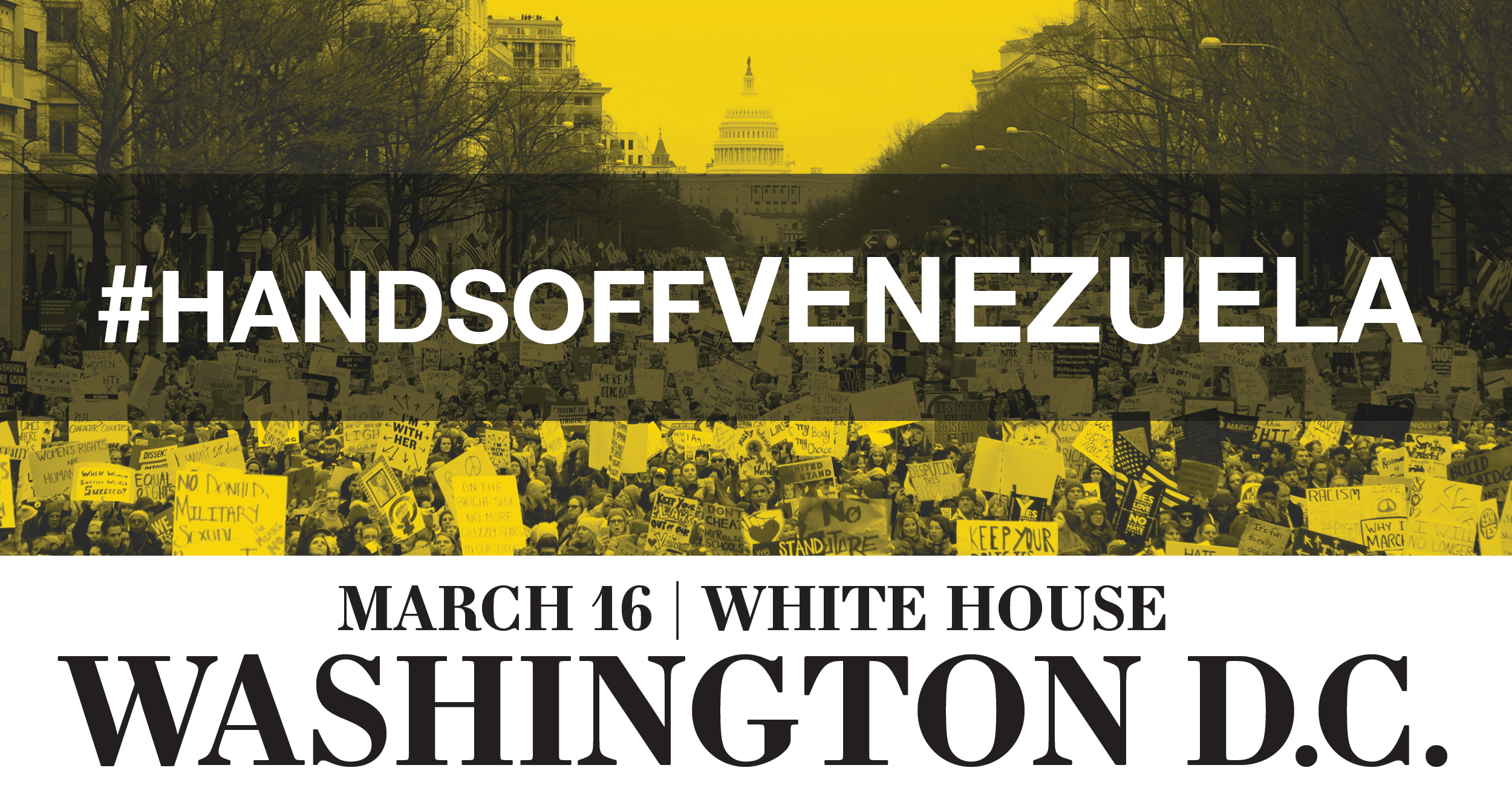 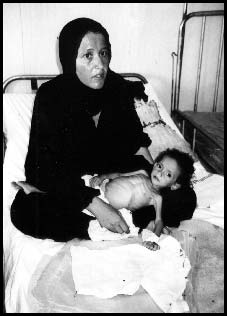 An Iraqi child in the 1990s suffers from dysentery on account of U.S. sanctions that prevented the import of water purification chemicals. Iraqi hospitals were deprived of basic medicines that would have treated such conditions.

The Trump administration's effort to effect immediate regime change in Venezuela through a violent split in the armed forces has failed. But its goal and its aggression have not stopped. They are entering a second stage based around intensifying sanctions on Venezuela, seeking to strangle its economy. The strategy is to weaken and isolate the country, spread discontent through suffering, and allow the possibilities of regime change and intervention to ripen over time. Sanctions are not an alternative to war — they are a method of war that sets the stage for military action.

This makes the March 16th National March on Washington, which will reject the Venezuela sanctions loudly and in large numbers, all the more urgent and necessary. (To buy a bus ticket to the mobilization, you can find a list of transportation centers here.)

Washington has already seized the U.S.-based assets of Venezuela’s nationalized oil industry, PDVSA, which is responsible for 90% of the country’s foreign export earnings. Outrageously, the Trump administration has announced that it will only turn over the seized assets to their hand-picked and unelected new “president,” Juan Guaidó, a previously unknown politician from a party closely associated with far-right street violence.

The many U.S. sanctions on Venezuela block normal trade relations, not only between the two countries, but also between Venezuela and other states. Because of its domination of the international banking system, the U.S. Treasury Department unilaterally imposes huge fines on foreign banks and companies that do business with U.S.-sanctioned countries, of which there are now 30 to varying degrees. Few in the corporate media will recognize the devastating role that it has to choke off a country from access to credit, which is necessary to engage in nearly all global trade. Being effectively shut out of the world banking system makes trade almost impossible.

Because Venezuela has to pay for many necessary imports in foreign “hard currencies,” the seizure of these assets in the United States, Britain, Canada and others is especially grave. The Bank of London is for instance refusing to allow Venezuela to access and withdraw $1.2 billion in gold that it holds there — gold that represents the blood, sweat and labor of the Venezuelan people. Just imagine how many vital necessities this could purchase.

Since the rise of the Bolivarian Revolution two decades ago, Venezuela’s oil exports have been used to fund a vast array of housing, health, nutrition, literacy and other programs that have lifted millions of Venezuelans out of poverty. Now those programs are endangered by U.S. sanctions and other forms of economic warfare — which have operated under both the Obama and Trump administrations. They are intended to accelerate the country’s financial problems that stem from steep declines in oil revenue.

The imperialists running U.S. foreign policy pretend to be concerned about the “well-being” of the Venezuelan people – as if they actually care about any people. While illegally seeking to force a small amount of “humanitarian aid” across the Colombia-Venezuela border, the same U.S. leaders have caused thousands of times the losses of food, medicine and other supplies to the country.

Venezuela has the largest proven oil reserves in the world. The puppet Juan Guaidó has promised to reopen Venezuela’s oil fields to Exxon Mobil, Chevron and the other giant oil monopolies who used to control them. We have seen the script before — many times.

In 1953, the CIA and British intelligence overthrew the first democratically elected government in Iran. Two years earlier, the Iranian government led by Mohammed Mossadegh had nationalized its oil fields, which the British empire had exploited for nearly a half-century. In response, the British and U.S. organized sanctions in the form of an international boycott of Iranian oil, leading to destabilization and finally the coup that placed the Shah, a puppet monarch, back on the throne for another quarter-century. The U.S. trained the hated SAVAK secret police that tortured and murdered more than 100,000 Iranians. The U.S. and British oil giants became even richer from their retaken oil fields in Iran.

The Aug. 17, 1954 New York Times celebrated the CIA coup: "Underdeveloped countries with rich resources now have an object lesson in the heavy cost that must be paid by one of their number which goes berserk with fanatical nationalism ... It is perhaps too much to hope that Iran's experience will prevent the rest of Mossadeghs in other countries, but that experience may at least strengthen the hands of more reasonable and far-seeing leaders."

Then there was the Cuban Revolution in 1959, which led to the end of the virtual U.S. ownership of the island, from the railroads and utilities, to the sugar plantations, to the resorts and casinos, to the drug trade and prostitution. While Cuba didn’t have oil, it was the source of immense profits for U.S. capitalists of both the aboveground and underworld varieties.

Starting in 1960, the U.S. imposed an international blockade and hundreds of sanctions on Cuba, aimed at destroying its economy. Under its revolutionary government, Cuba defeated numerous CIA-organized attacks. But the Cuban government has calculated that the blockade has caused more than $130 billion in damages on its developing economy in the last six decades.

The most extreme form of sanctions/blockade was that imposed on another oil-rich country Iraq in 1990.  Iraq, too, had been part of the British empire until a revolution in 1959 freed it. Soon after, its rich oil fields were nationalized.

When Iraq occupied Kuwait following a long dispute between the two, the U.S. rammed through the UN Security Council the most comprehensive blockade seen in modern times. Iraq, like Venezuela, was building its economy but still depended heavily on oil exports to purchase food, medicine and all kinds of industrial goods on the world market. After destroying most of its civilian infrastructure by intensive bombing, the U.S. and its NATO allies imposed a complete blockade on the country, enforced by naval, ground and air forces.

More than two million Iraqis out of a population of 26 million died — more from the sanctions/blockade than from the bombs and shells. An estimated half of those who died were children under the age of five. Sanctions were proven again to be a policy of extreme violence, although they were not reported as such in the corporate-owned media. The complete blockade of Iraq lasted for seven years, and a modified version of it for six more, finally culminating in the 2003 invasion and occupation of the country. Today, the formerly nationalized oil has again been privatized; the oil monopolies are once again feeding on it.

Today, more than 30 countries are under some form of U.S. sanctions. It is virtually always poorer countries that are sanctioned by the wealthy and more powerful ones. The U.S. government, however, has never faced UN Security Council sanctions despite its murderous and illegal invasions and wars in Korea, Vietnam, Central America, the Middle East and more.

The international legal system is much like the domestic one here: The rich inflict punishment on the poor and call it justice.

Sanctions are not an alternative to war; they are war, and if there were any real justice, sanctions would be widely understood as a war crime.

It is our moral and political duty to stand up to this criminal policy. At the March 16 National March on Washington the people of the United States will come together with one loud voice to say: NO U.S. Sanctions on Venezuela! We invite all people of conscience to join us there.

Make a donation to help cover the many costs of printing, transportation and setup for the "Hands Off Venezuela" National March on Washington. We have no corporate or big foundation money and are funded entirely by the grassroots and supporters like you.