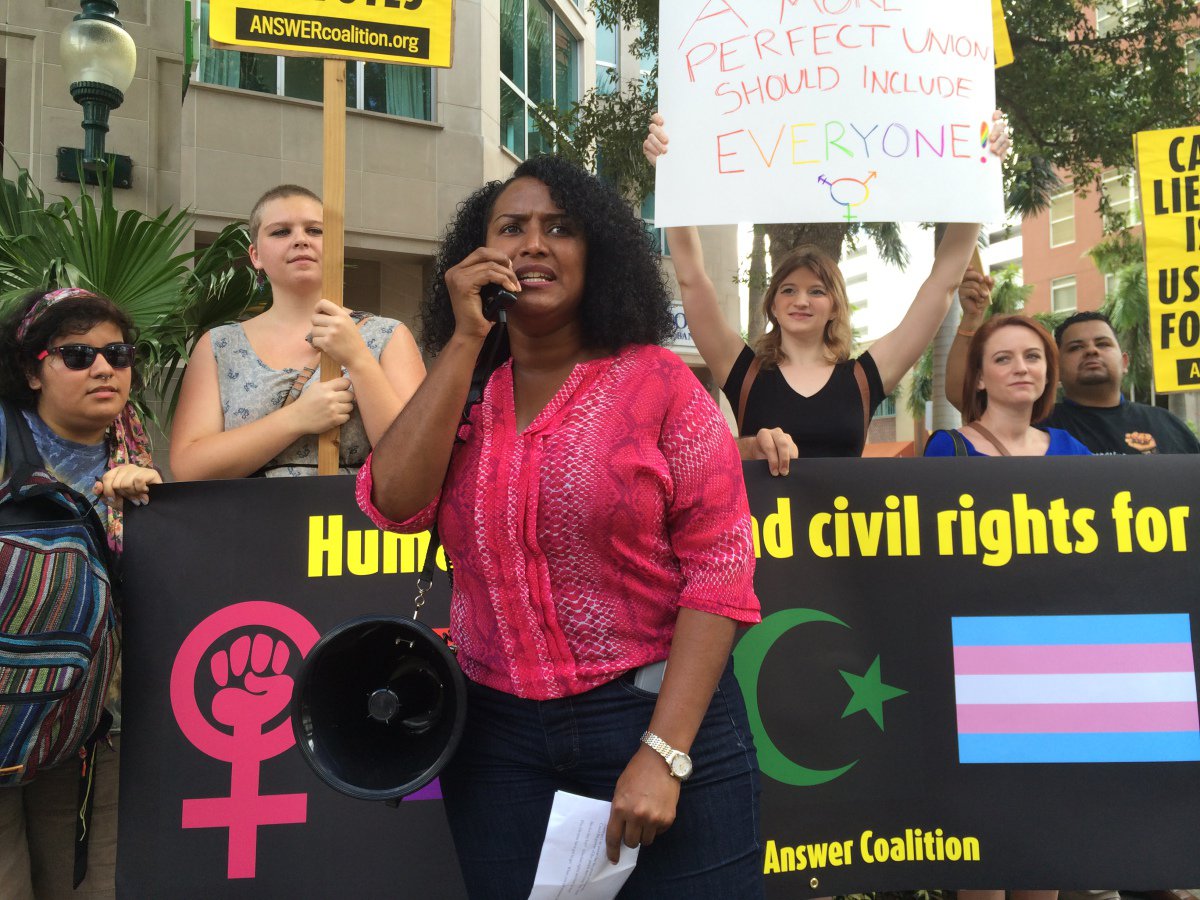 On November 4, Republican presidential candidate Ben Carson visited Bookstore 1 Sarasota on Main Street, attracting a crowd of 2,000 people.Carson visited just days after emerging as the GOP frontrunner, ousting Donald Trump from his number one spot in the polls.

The retired neurosurgeon’s popularity among Republicans shot up after he expressed a number of reactionary and hateful views in media appearances. Carson declared that Muslims should be disqualified from the presidency and that abortion should be banned even in cases of rape and incest, among other views.

Sarasota activists refused to let Carson spread his dangerous message unopposed. In a protest called by Suncoast Answer Coalition, 20 people took to the street to promote a counter-message of human and civil rights for everybody.

“There’s already so much propaganda against Muslims,” said Parker. “It causes a lot of friction, separation, resentment to Muslim communities. It creates the hate crimes that we’ve seen happen toward mosques and communities.”

Standing against Islamophobia, Sarasota activists chanted, “Say NO to racist fear! Muslims are welcome here!” In defense of women’s rights, they also chanted, “Pro-life men have got to go! When you get pregnant, let us know!”

Shane Donglasan spoke to Liberation about why she believes in defending women’s reproductive rights.

“It’s really alarming and arresting that my rights as a woman can so easily be taken away from me and change the course of my entire life. Just imagine a whole aspect of your body being controlled and the mental stress that can cause, as well,” said Donglasan.

Kaylee Shockley, who works with survivors of violence, used her 30 minute lunch break to stand up for women’s rights also. She
spoke to Liberation about Carson’s views on domestic violence. Late last year, Carson defended NFL running back Ray Rice after he attacked his then-fiancé Janay Palmer.

“I came out first as an advocate, specifically advocating against violence against women. Repeatedly, Ben Carson has made it a point to both victim-blame survivors of domestic violence and minimize the actions of perpetrators,” said Shockley. “I would say that he’s very much taken this role with gun violence too—victim-blaming.”

Liberation also heard from Muirreal Brown, a New College student, about Carson’s views on the LGBTQ community. Carson has shockingly compared homosexuality to bestiality and pedophilia.

“When you have these political figures that are galvanizing these movements and stirring people up in their bigoted, ignorant hatred of gender and sexuality non-conforming people, that’s putting people’s lives in danger,” said Brown. “I think everybody has the right to live in a society where their identity doesn’t predispose them to being assaulted and abused and murdered, which are all things that are facing the LGBTQ community in disproportionate numbers.”

By using Carson’s visit to unite across different issues, activists continued to build the social justice community in Sarasota. Together they alerted Sarasota that the community will defend LGBTQ rights, women’s rights, and the civil and religious rights of Muslims with dedication, including when it means taking to the streets.