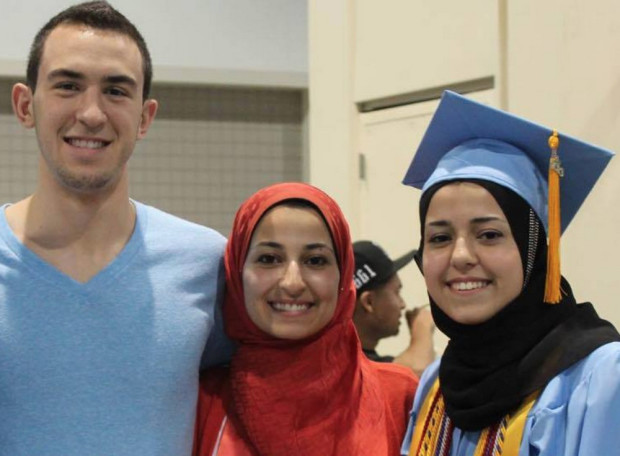 The February 10 execution-style killing of three young Muslim social justice activists in Chapel Hill, North Carolina is the most recent hate crime and terrorist attack in the U.S. to gain national and international attention.

Yusor Mohammad Abu-Salha; her husband, Deah Barakat; and her sister, Razan Mohammad Abu-Salha, lived together in an apartment in Chapel Hill. Barakat was a dentist recently graduated from University of North Carolina; Yusor was planning on entering dental school soon and Razan was studying architecture at North Carolina State. They were known for their generosit and service to those less fortunate, from feeding the homeless in their local community to going on a mission to provide dental care to Syrian refugees.

At the University of North Carolina, thousands of people attended the vigil at “the Pit,” a courtyard beside the student union. Vigils are being  held across the country at universities and mosques this week in memory of Yusor, Deah and Razan and in solidarity with all Muslim-Americans. Global outrage has spread across social media with the hashtag #MuslimLivesMatter and #JusticeforMuslims.

The family of the murdered youths has also called for an investigation into the hate crime. The general uproar has pressured the Obama administration and federal government to finally respond.

The killer, Craig Stephen Hicks, is a 46-year-old white man who previously harassed the family about their appearance and threatened them with a gun. Authorities have found at least 13 firearms and stockpiled ammunition in his apartment. Hicks’ Facebook page reveals that he is a radical “New Atheist” and devotee of the warmongering public intellectual Richard Dawkins.

As always, capitalist news media refuse to call the shooting what it is—a hate crime and act of terrorism. Instead, they spin the narrative to make the killings the result of a “senseless” parking lot dispute, a man with mental problems and “equal opportunity anger,” or colorblind hostility toward all religions. However, if Craig Hicks were a Muslim and the three murdered youth were white, the word “terrorism” would be everywhere.

This double standard, which makes every mass murder by white men an isolated tragedy rather than a systemic ritual of violence, is a basic feature of imperialist logic. In a system intertwined with the oppression of people of color, the dominant narrative always responds to racism with silence and obfuscation.

Meanwhile, the demonization of Muslims, Arabs and Black and Brown people is so commonplace it becomes disguised as common sense. The Chapel Hill shooting is a direct result of white supremacist and imperialist discourse pushed by dominant media, who serve the interests of the ruling class. A diligent search can yield a few segments on CNN, NBC or Fox News where oppressed people speak truth to power, but the vast majority of coverage is an overt display of victim-blaming, mystification and lies. This dehumanization of the Other at home is a component part of the narrative for endless wars abroad.

In the wake of these murders, along with other attacks on Muslim-Americans this week such as the assault on a Muslim family in Dearborn and the burning of a Muslim school for children in Houston, it is imperative that activists confront Islamophobia and anti-Arab bigotry in whatever form it takes.