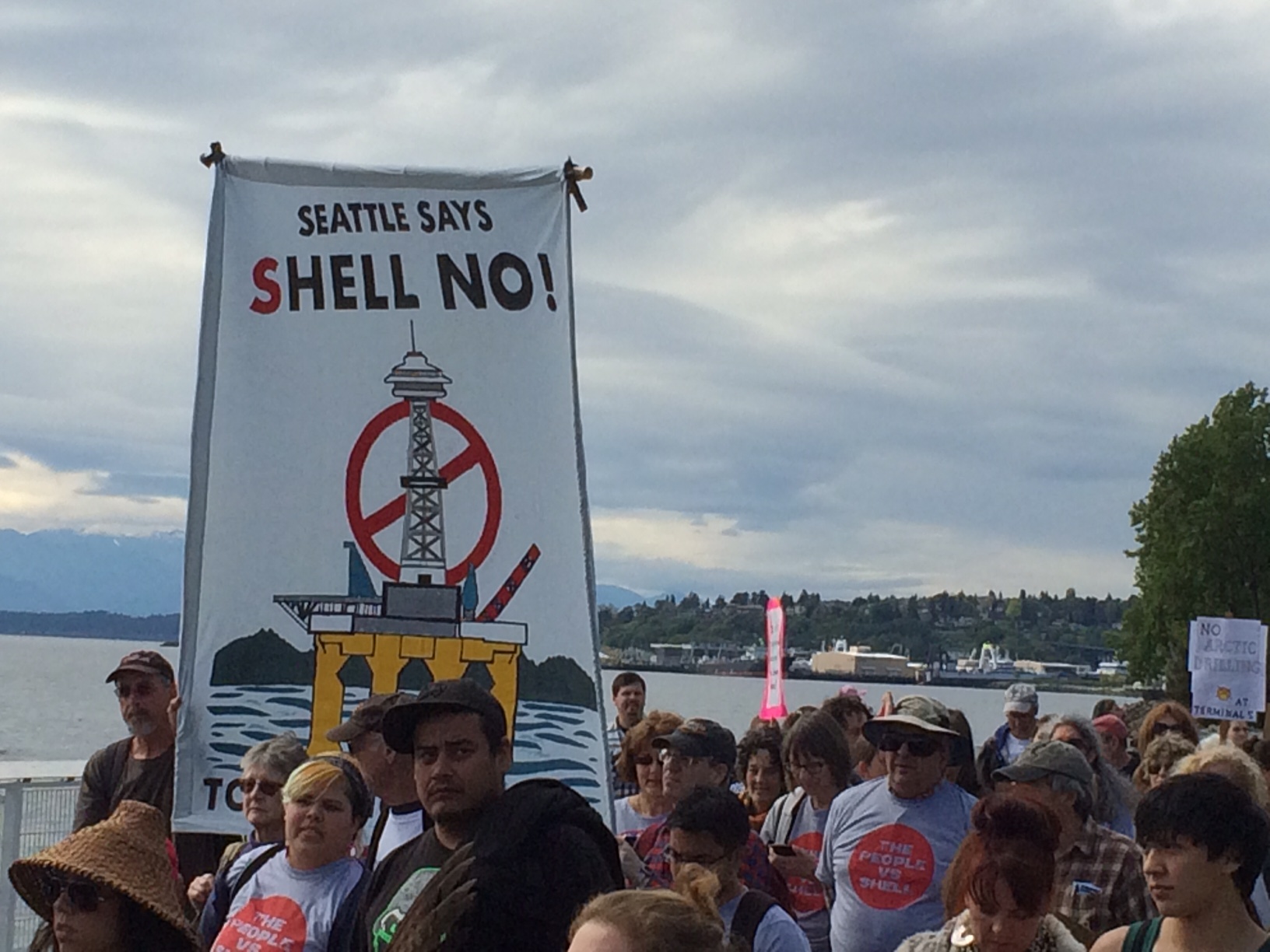 On April 26, more than 1,000 people gathered at Myrtle Edwards Park in Seattle to to say “Shell No” to Shell Oil’s arctic drilling plans. The Commissioners of the Port of Seattle voted behind closed doors to allow the drilling fleet to be housed here in the Puget Sound at the Port.

Organizers explained: “Shell sees climate change as a gateway to new profits. This is exactly the type of long-term, dirty fossil fuels project—like oil trains and coal exports—that can’t go forward if we hope to stop the worst effects of climate change and leave a real legacy for future generations.

“In January, it became public that the Port of Seattle agreed to house Shell’s Arctic drilling fleet this spring. But we’re showing Shell it sure made a mistake by choosing Seattle as the home base for its Arctic destroyers! The drilling equipment is on its way to Seattle right now, and it will sit in the Seattle Harbor as we’ll gather in community to say, ‘Shell No!'”

Divest UW is a student organization fighting to make the University of Washington divest from fossil fuel investments. Sarra Tekola spoke passionately about the impact that even a small increase in global temperature will have: “Even two degrees [higher] will mean genocide for the global south.” Tekola critiqued the narrative of placing the blame for global warming on individual lifestyle choices, adding: “Take down this defective system!”

Annie Leonard of Greenpeace USA pointed out that Seattle has a long history of standing up for the environment and against corporate profiteers. She introduced a group of Greenpeace volunteers who had scaled a moving Shell arctic drilling rig.

Sun Dance Chief Rueben George of the Tsleil-­Waututh Nation came from Canada to speak at at the rally. He is a co-­coordinater of the fight against the Kinder Morgan proposed tar sands oil pipeline and tanker expansion into Vancouver Harbour, the unceded Traditional Territory of the Tsliel-­Waututh Nation. This pipeline route is currently the only way this dirty oil from the Alberta Tar Sands is making its way from Canada to new markets in the Pacific  region. He shared his journey from being a successful family therapist to becoming a climate activist. He also spoke about the need to fight back against the big corporations that do not pay their fair share of taxes.

Another highlight of the rally was a musical performance by Aji and Adonis Piper with Plant for the Planet. After performing an original song, they were joined by their sister for a crowd-pleasing version protest version of the hit “Uptown Funk:” “21st century climate’s hot–don’t believe me just watch…Big Oil F– you up, Big Oil F– you up!”

Once everyone was up and chanting along, the entire rally posed for a group photo, and then participants marched to the Port of Seattle headquarters on Alaska Way, where thousands of petitions were presented to a representative of the Commissioners.

Today’s rally is just the start. Organizers are planning a multi-day festival of resistance to arctic drilling by Shell, May 16-18. May 16 will feature a gigantic kayak flotilla in the Sound, and on May 18 there will be massive civil disobedience. Trainings for “kayaktivists” are scheduled.