Seattle to Shell: ‘If you build it, we will block it’ 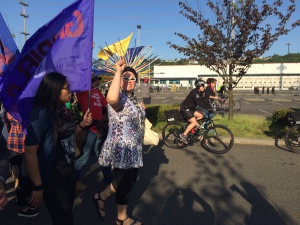 Over the course of a few days, massive numbers of climate activists gathered in Seattle to say no to Shell’s Arctic drilling rig, which is currently sitting at Terminal 5 of the Port of Seattle. The Shell No Action Council organized a mass kayak flotilla, the “Paddle in Seattle” on May 16, and a day of mass nonviolent direct action to stop Arctic drilling and take a stand against companies like Shell who profit from climate chaos. Liberation News was there.

On May 16, about 1,000 “kayaktivists” paddled out into the Sound, lead by Duwamish longboats, to confront Shell’s Arctic drilling rig. Hundreds of concerned people flocked the upper platforms of Jack Block Park to view the flotilla as the kayaktivists paddled their way to the drilling rig. Liberation spoke with people gathered at Jack Block Park in West Seattle to view and support the “Paddle in Seattle.”

Liberation spoke to Richard, who said, “I am out here because I don’t think our city should play any part in hosting Shell’s Arctic drilling fleet and contributing to the rapid climate change. The Port [of Seattle] should, since it’s their jurisdiction, should enforce what they voted on the other day, when they implored Shell to wait until the permit dispute was resolved, but Shell ignored them and Foss maritime docked them here anyway…Shell is worth over half a trillion dollars, they could invest that in more green energies, I’m not going to buy into the false choice of jobs or destroying the environment.” 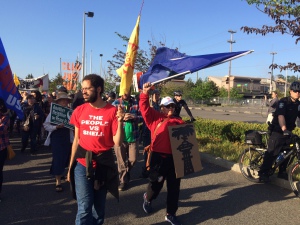 Richard was referring to the conflict between the city of Seattle and the Port of Seattle, which leases land from the city. Mayor Ed Murray, feeling the heat from the environmentally conscious Seattle community, told the Port that the lease agreement did not cover housing equipment such as the drilling rig and demanded that the Port get a new lease agreement before housing the rig. Of course, the Port has a history of ignoring the will of the electorate and claiming to be essentially above the law, as in Sea-Tac, Wa, where it have refused to pay the $15 minimum wage to Port employees at Sea-Tac airport , claiming that the Port is above the will of the voters in Sea-Tac.

Jasmine and Chris walked into Jack Block Park holding stand up paddleboards over their heads, attired in wetsuits. Jasmine explained, “We’re getting out there and supporting [the flotilla.] I don’t want more oil drilling.” Chris added, “The message that I want to support here is the public’s interest in divesting from fossil fuels and investing in alternate means of energy, more sustainable energy and materials production.” 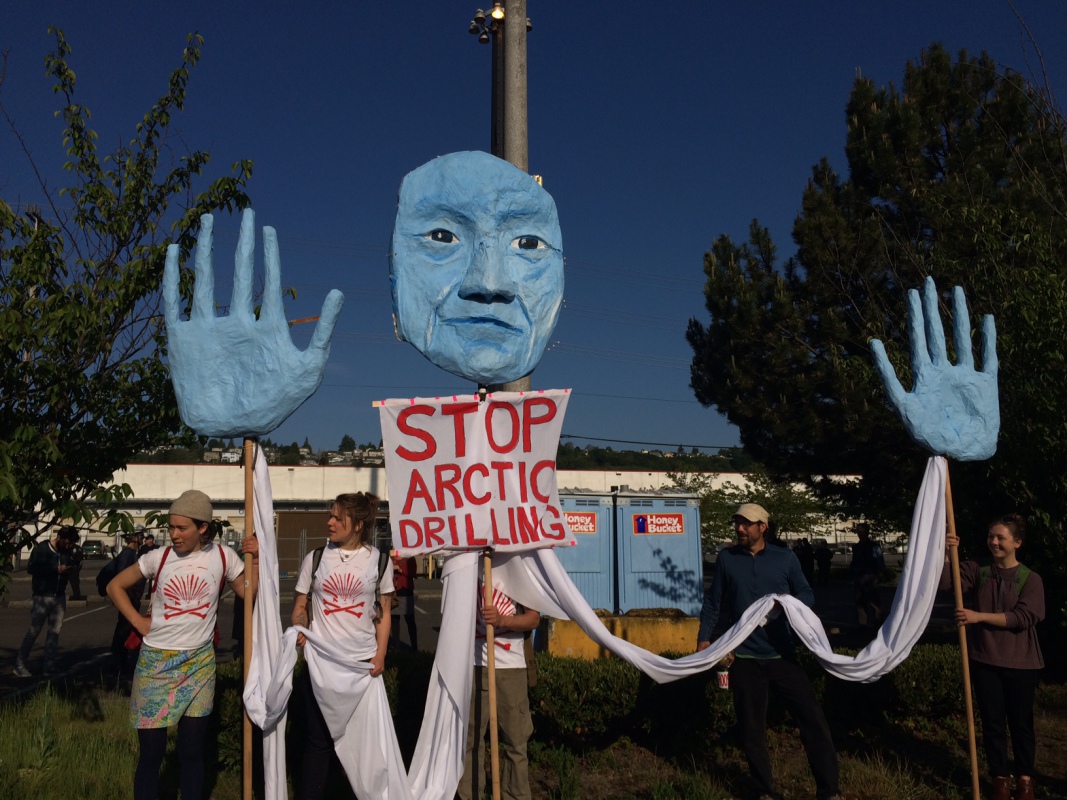 Waylan Costello was there with a group of other youth, dressed as gulls. “I’m here to represent a creature that can’t talk in our language and say that it’s not OK with getting oil spilled on it, it’s not OK with its environment getting disrupted, not OK with the noise pollution, not with the heavy machinery and certainly not with global warming.”

As this report is being filed, no arrests have yet been made at Terminal 5, where activists are blocking the employee access gates to the drilling rig. As many as 1,000 protesters gathered at 7 AM at the Duwamish River Fishing Dock on Harbor Island, and then marched, taking all lanes of traffic over two small freeway bridges, to Terminal 5 where they blocked all three employee access gates. After more than an hour of blockading, reports filtered back to the blockade that police were turning employees back at the other side of the bridge, meaning the blockade had effectively disrupted business as usual for Shell’s Arctic drilling rig. 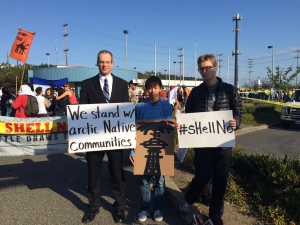 The mood was festive at Terminal 5, as performers sang and rapped to keep spirits high. Allison Warden, Inupiak (rapper name AKU-MATU), came all the way from Alaska to participate in the march and perform her uniquely inspiring rap. Many demonstrators held creative signs and banners.

Liberation spoke with three University of Washington students affiliated with Divest UW, which spearheaded the recent successful vote of the UW Regents to  to prohibit direct investment of endowment funds in publicly traded companies whose principal business is the mining of coal for use in energy generation.

David Herman of Divest UW explained that the issue of Arctic drilling is closely related to the issue of coal. “It boggles the mind that we are doing this. We’ve already had the BP Deepwater Horizon disaster in the Gulf, it looks like Shell has no way to clean this up in the Arctic. There is a 75 percent chance that there will be a major spill, says the Bureau of Energy Management. We’ve already had Shell ground a rig in the Arctic… If we discover and use this oil, we will be well beyond the climate change safe threshold of two degrees celsius (or possibly safe threshold). Further, we have Native communities whose whole way of life up there depends on healthy oceans. Its utterly ridiculous, it’s beyond reason.” 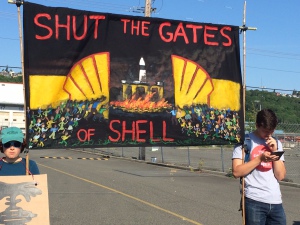 Morgan Sinclaire of Divest UW added, “They wouldn’t even be able to drill in the Arctic if it wasn’t for the melting Arctic in the first place, that they caused with the burning of fossil fuels. Now they are going to drill for more oil. When you go to the Arctic to drill for oil, you are assuming that we’re already going to extract all the oil on the rest of the planet, and that’s going to lead to disaster.”

This is just the beginning of a movement to stop Arctic drilling. This coming weekend, similar protests will take place in Bellingham, Wa. Protesters are determined to stop climate change by ending the use of fossil fuels and implementing a sustainable energy economy.