Action Alert: Send a letter to your Senator - Hands off Nicaragua!

The ANSWER Coalition is circulating the following appeal from the Alliance for Global Justice in solidarity with Nicaragua against U.S. intervention. 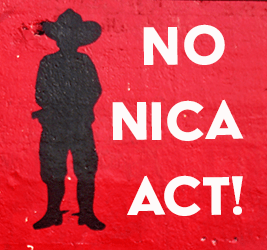 On Wednesday, September 26, the Senate Foreign Relations Committee reported out the Nicaragua Human Rights and Anticorruption Act of 2018 (S. 3233) which incorporates the House of Representatives-passed Nicaragua Investment Conditionality Act of 2017 (NICA Act). S. 3233, the Senate bill, not only would direct US officials to block loans from international lenders such as the World Bank and IMF, it would impose sanctions on individual members of the elected government of President Daniel Ortega (which could be lifted through an annual waiver) require the Nicaraguan government to hold early elections, and increase intelligence agencies spying on that country.

The Bill can now be called up for a full Senate vote at any time or passed by unanimous consent, as happened with the NICA Act in the House of Representatives.

Wherever any of us feel the primary fault lies for the unrest in Nicaragua since mid-April, we should be unified against US intervention in Nicaragua’s sovereign affairs. The failed coup dealt a serious blow to Nicaragua’s economy, especially in the tourism industry. It will take years to recovery. Unilateral sanctions are illegal under international law, but a favorite action when the US government wants to “make the economy scream” as a prelude to regime change.

As the Chilean people in 1973 or the Venezuelan people in 2018 can tell us, it is not the political elites who suffer under sanctions, it is the ordinary people of the country who are only trying to better the lives of their families. Food scarcity, lack of medicine, skyrocketing inflation, all are the direct effects of sanctions. Their only purpose is collective punishment aimed at making conditions so bad that people will support an undemocratic transfer of power in their country.

Our country is funding regime change in Nicaragua. That makes it our responsibility to stop US intervention today, just as we did in the 1980s.

Nicaragua has been able to make massive progress in the past decade in large part due to a government committed to eradicating poverty along with its ability to access international credit. It has extensive social programs such as free healthcare and education at all levels (including university), the building of rural roads, electrification, new housing, support for small family business and the informal economy, hunger reduction programs, etc. This made Nicaragua the safest country in Central America, with low levels of migration and some of the strongest sustained economic growth in the region. The sanctioning of Nicaragua would put a major roadblock on this progress, make reconciliation in the aftermath of the failed coup more difficult, and would likely decrease the quality of life for Nicaraguans and increase migration to other countries including the United States.

Please tell your Senators that destroying Nicaragua’s economy will not help build the human and economic rights of the Nicaraguan people. The US has frequently played a negative role in Nicaragua’s history. Just this once, we demand that Congress leave its hands off Nicaragua and let Nicaraguans resolve their own difficulties.