Sexism, War and Women in Combat 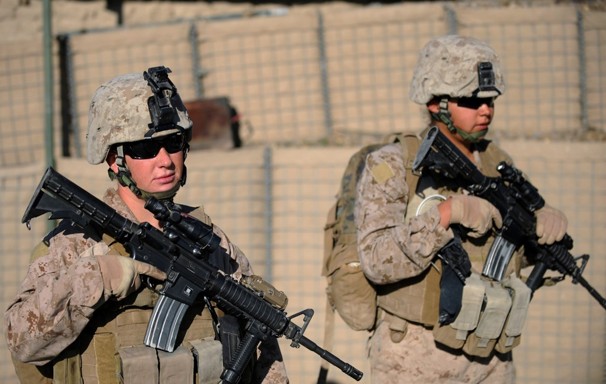 On Jan. 24, the Pentagon announced that the ban on women in combat arms Military Occupational Specialties, such as infantry and artillery personnel, scouts, tankers, cavalry and more, will be lifted. Defense Secretary Leon Panetta claims that now all "talented and qualified people [will] be able to serve this country in uniform."

WORD recognizes the importance of eliminating gender-based barriers in all professions and work places. The extreme male-dominated, chauvinist and sexist culture in the military makes a change of this magnitude quite significant. However, it is often overlooked that the past decade of warfare in Iraq and Afghanistan has already blurred the traditional notion of combat versus non-combat positions in the U.S. military.

Even though the traditional combat arms MOSs have, until now, been open only to men, the occupations of Iraq and Afghanistan have put women in the U.S. military in combat like never before. Because of the guerrilla insurgency in those countries (which created a severe lack of U.S. combat troops and redefined roles) women in non-combat arms MOSs such as military police, truck drivers, civil affairs, military intelligence and more have found themselves in heavy fighting—being ambushed on convoys, attacked on bases, and even directly participating in military offensives alongside combat arms troops.

The Marines have all-female teams known as “the lionesses” which are embedded with infantry troops to enter homes where Afghan women refuse to speak to male troops on patrols and raids. Female helicopter pilots also enter combat on a daily basis. Women have served in combat settings for many other reasons as well which accounts for the fact that, according to the military, more than 150 women service members have been killed and more than 800 wounded out of the 280,000 women that have been deployed to Afghanistan and Iraq since 2001. This new policy recognizes the reality that women have been serving in combat positions for some time, and will further open the door to female participation in those MOSs where their official role is killing and dying on the front lines.

The myth of inferiority

The reaction from the right wing, like former U.S. Army officer and Arkansas Congressman Tom Cotton, is that women are “biologically unfit for combat;” that they are incapable of performing to the standard of their male counterparts; that it “goes against their nature.”

The irony of the response from these bigots in the military leadership is that military history shows quite the opposite—including crushing defeats of the U.S. military at the hands of resistance groups that give women equal combat roles.

During the Vietnam War, the U.S. military was decisively defeated by an insurgent force that had women on the front lines of combat.

During the Cuban revolution, where peasants and poor workers overthrew a brutal military dictatorship, the first women’s platoon was created. When male soldiers complained that women soldiers had been given rifles instead of them due to a weapons shortage, Fidel Castro famously responded, “They are better soldiers than you are.” One of those women soldiers reported: "We were never behind. We were always beside or ahead of them [the men]. There was no difference.”

The Revolutionary Armed Forces of Colombia (FARC), waging a long guerrilla war against a dictatorship, boast of one-third of their fighters being women. Women have distinguished themselves as skilled and dedicated fighters in combat all across the world, from Latin America, to Africa, to the Middle East, to Asia. The difference between the examples cited and the situation of women in the U.S. military is that those women were fighting wars against the interests of big banks and corporations, completely the opposite of the role of women now serving in the U.S. military.

The arguments from the right wing against women in combat boil down to insecurity and chauvinism on the part of military men, disregarding the illustrious history of women on the front lines of battle.

There is an expectation that along with women’s bodies being pushed to the forefront, so too will their concerns and issues in the military. The New York Times’ Gail Collins suggests that having more women rise in the ranks might, “make things better because it will mean more women at the top of the military, and that, inevitably, will mean more attention to women’s issues.”

Eighty percent of these attacks go unreported due to threats and intimidation. The military culture of silence around sexual assault facilitates rape and fails to hold the rapists accountable. Even when these crimes are reported, the woman is often punished instead of the perpetrator.

While the U.S. military publicly pats itself on the back for breaking a sexist ban on combat MOSs, they ignore and cover-up the biggest crisis facing women in the military today.

The economic draft of women

Not-so-coincidentally, combat arms MOSs traditionally absorb the poorest recruits with the lowest level of education. New recruits who did not graduate from high school, or who scored low on the Armed Services Vocational Aptitude Battery (ASVAB) due to inadequate educational opportunities growing up, are funneled directly into combat jobs that carry the highest risk of death and injury.

The numbers of women joining the military reflect the economic reality that many women face every day. Not only are we faced with the persisting wage gap but also an economic system plagued with job disparity and sky-rocketing tuition hikes. The hardest hit communities of economic hardship are those of poor and working people of color. Women of color make up 47 percent of women in the military.

That gender-based barriers have been lifted in the military may increase the recruitment and deployment of women. In reality though, like many of their male counterparts, 82 percent of women joined the military after 9/11 to receive education benefits, and 67 percent joined to gain job skills. As civilians, women make 77 cents to every man’s dollar and African American women make 69.6 cents, while Latinas make only 59.8 cents to the dollar earned by a man. In the military there is no such wage gap—all soldiers of the same rank receive the same wages and benefits, making it attractive to women.

Don’t fight FOR imperialism, fight AGAINST it!

While women should have access to any profession without facing sexist barriers, the U.S. military is not a force for progress. They care little for the real issues facing women in the U.S. and directly harm and kill our sisters around the world. The wars waged on our sisters abroad are not for liberation, but for the rape of another country for its resources.

Some claim these wars are helping women in places like Afghanistan, but in reality women in Afghanistan and in the United States share the same oppressor. While U.S. imperialism destroys the lives of women and children abroad it is simultaneously stripping women in the U.S. of the basic rights we deserve.

Women in the military deserve full equality, to be treated with dignity and respect. Women service members also have the right to refuse to participate in immoral, unjust wars that perpetuate women’s oppression globally.

If you are a service member and want to learn more about how you can refuse deployment or fight for your rights against sexual abuse, contact our brothers and sisters in March Forward! an organization of veterans and active duty service members against the war.