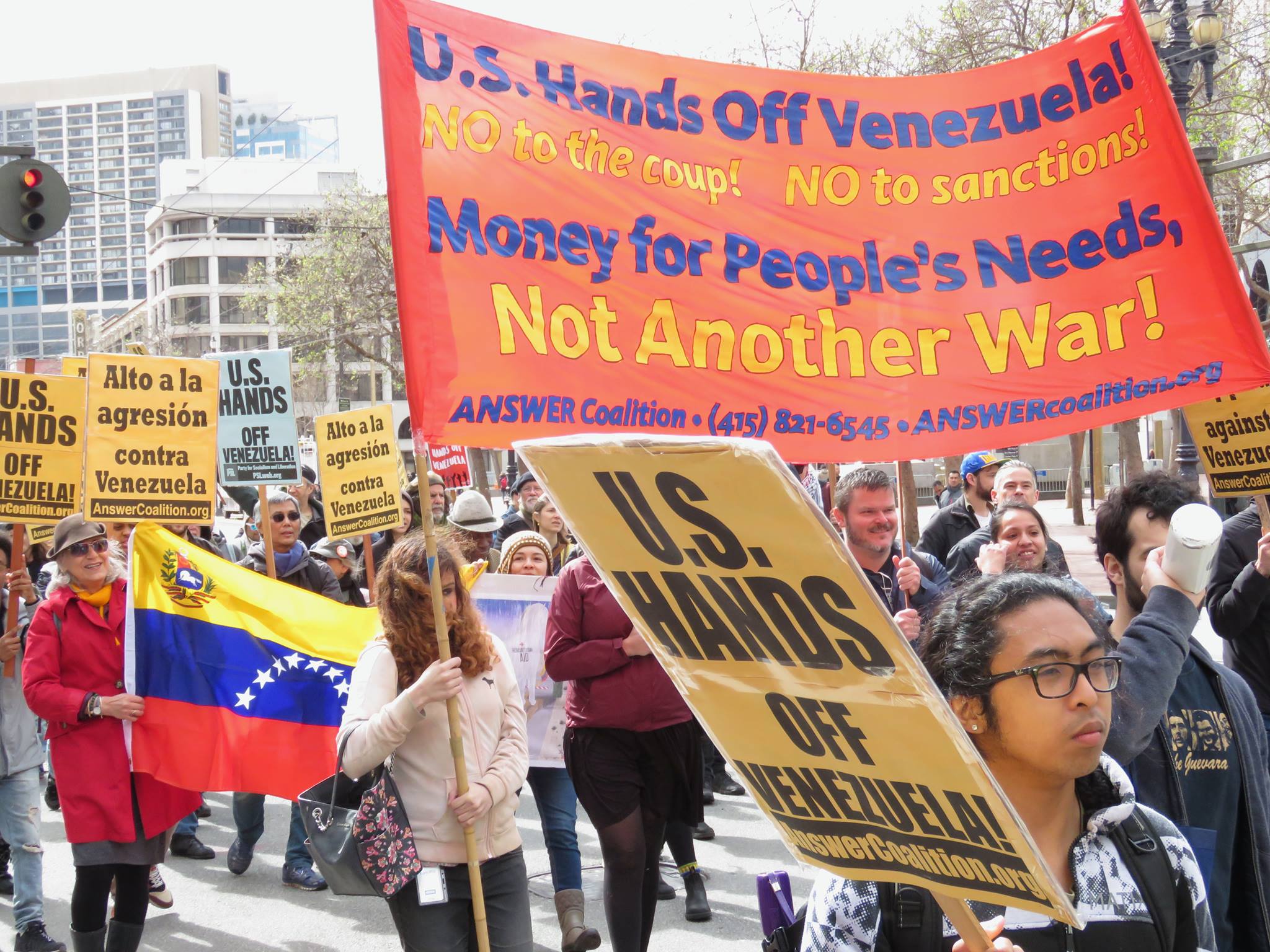 On Saturday, March 9, a spirited rally and march took place in San Francisco demanding an end to U.S. imperialist aggression against Venezuela.

Venezuela was two days into a near-nationwide blackout, resulting from a multi-faceted attack on the country’s energy infrastructure.

March 9 also signified the fourth anniversary of former President Obama declaring Venezuela to be a national security threat to the United States, allowing an escalation of economic warfare via sanctions. The Trump administration has extended this mandate.

Every year since 2015, the democratically elected government of President Nicolas Maduro has designated March 9 to be a “Bolivarian Anti-Imperialist Day.” Many thousands of working-class and revolutionary Venezuelans hit the streets in defense of their sovereignty and the political, economic and social gains made in the last 20 years.

In San Francisco, more than 200 people representing a broad range of progressive and anti-imperialist organizations throughout the Bay Area came out in solidarity. The action was in defiance of the growing pressure directed at people in the U.S. to fall in line behind regime-change efforts from corporate-owned media outlets and the political establishments of both major parties.

During the program, speakers stood at the foot of the statue in United Nations Plaza of Latin American liberator Simón Bolívar, under a banner reading “U.S. Hand Off Venezuela! No to the coup! No to sanctions! Money for People’s Needs, Not Another War!”

Erika Hidalgo, an ANSWER Coalition organizer and one of the event’s emcees, characterized some of the key players in attacks against Venezuela:

“Let’s take a moment to think about which countries are backing the Venezuelan opposition. Colombia, where Black people, indigenous people and poor people keep getting murdered. Brazil, where the new president has pretty much promised the extermination of indigenous people. This is not a side we want to be on … the tiny minority who want their privileges restored. So let’s make it clear, they represent a very racist, pro-capitalist minority, and we need to stand with the vast majority of the working class that does not want the U.S. in their country.”

“Our teachers were striking last week because of what’s going on in the schools and the lack of funding, but in Venezuela there’s really good, sound, free education, and really good, sound health care. These are the things that don’t exist here that we are interrupting globally in other countries and places. Many of the indigenous people and black and brown people are deeply impacted … how are we going to disrupt something somewhere else that we don’t have here?”

Frank Lara, a public-school teacher in the city’s Mission District, expanded on the realities of living conditions for many people in this country:

“Our school had to really work hard to get a shelter to provide housing for homeless children. … This is a program with a $500,000 price tag, and then because we supposedly don’t have enough clients the city and the mayor’s office suddenly doesn’t want to fund these basic needs.

“When you finally get a house to live in you’re gonna fight like hell for that government that gave you a home, that gave you a future, you would fight for that too, we’re fighting for that here … in the richest country in the world that has invaded the rest of the world.”

Ahjamu Umi of the All-African People’s Revolutionary Party spoke on eliminating the stigma around socialism and its potential for positive change:

“We know that since 1999 the Bolivarian Revolution in Venezuela has used its oil wealth to provide heating oil all throughout Africa, all throughout inner-city communities in this country, and so this is what they want to stop, they want to stop socialism. That’s what we got to start understanding. … Once we raise consciousness around the fact that socialism is not a bad word, it’s really what we want, it’s really what we need. Once we raise consciousness around that, then we can begin to build movements that can build capacity to wipe Uncle Sam out and bring him to his knees, and build the world that our future generations deserve.”