On the 11th anniversary of the Afghanistan war

Free Palestine – End the occupation!
Stop the attack on civil rights & liberties!
Jobs, healthcare, housing, education for all!
Stop the war on working people here and around the world! 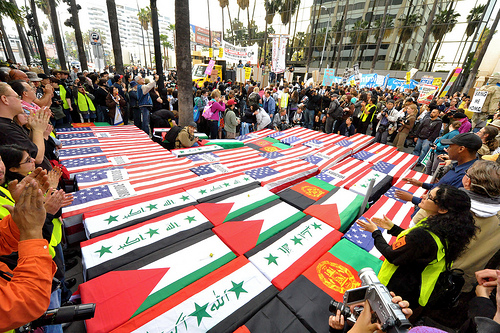 Endorse the demonstration and RSVP now!

The U.S. and its allies are arming, funding and training the opposition forces in Syria, while talking of imposing a “no-fly zone” on that country – a step that would immediately lead to a bigger war.

Here in the United States, civil rights and liberties are facing severe attack, with “national security” used as the excuse to spy on the people and infiltrate progressive organizations, targeting especially Muslims, Arabs and other people of color. While tens of millions of people remain unemployed due to the capitalist economic crisis, social programs are being slashed and public workers laid-off. Labor unions are under unprecedented attack. The corporate media blames the workers for the crisis, but the real cause is clear: a military budget that really totals over $1.4 trillion dollars, more than all the other countries on Earth combined!

On Saturday, October 6, we will mark the 11th anniversary of the Afghanistan occupation with a rally at Powell and Markets Sts. at 12 noon. We will protest the war on poor and working people around the world and in the U.S. Following the rally, we will march to the Grand Hyatt hotel (Sutter & Stockton Sts.) in solidarity with the Local 2 hotel workers, who are carrying out a worldwide boycott of the notorious Hyatt chain.

Only a powerful people’s movement can turn this situation around. Join us on Oct. 6 in the streets of San Francisco and many other cities across the country and around the world. Endorse and volunteer to help build the movement now!