Phone Campaign + Petition: Justice For Keenen and Anthony, murdered by a racist in Long Island, NY

The ANSWER Coalition encourages its supporters to sign on to the petition below circulated by the Justice for Keenen and Anthony campaign and participate in the call-in.

Read the latest press release from the campaign here

The fight is not over to get justice for Keenen & Anthony!

Learn more, participate in the phone campaign and sign the petition below: 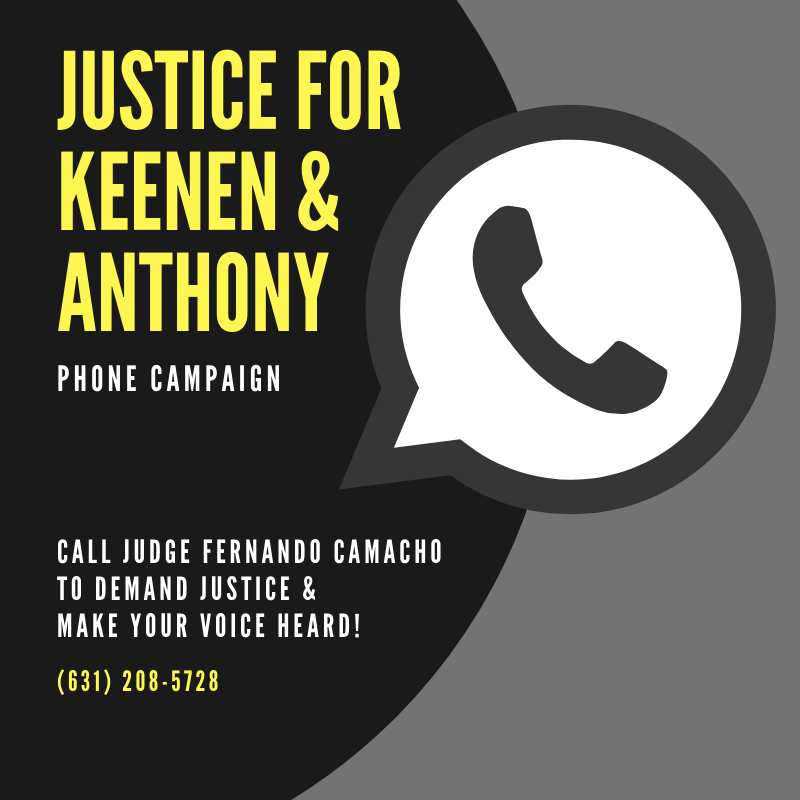 Call Judge Fernando Camacho's office directly to make your voice heard! You will not reach Judge Camacho directly, but instead will be connected to his clerk/secretary. Get in a couple sentences that you are calling about Bouchard's case before they try to direct you to mail Judge Camacho your concerns. Be firm but respectful!

"Hello, my name is _____ and I am a Long Islander calling about the case of Christopher Bouchard. I want to urge Judge Camacho to impose the maximum sentence to ensure that Bouchard receives just punishment for his crime of killing Keenen and Anthony."

You can also reference Judge Camacho's sentencing in a 2017 drunk driver case (read about it here: https://www.newsday.com/…/o-brien-sentencing-dwi-wrong-way-…).

Call today and tell Judge Camacho that the community is outraged and will not accept a light sentence for this heinous crime!

Background on the case

On June 22, 2017, Christopher Bouchard cruelly killed 19-year-old Keenen King and 20-year-old Anthony Holmes-Garriques by driving a minivan directly into their bodies. This depraved killing must be punished to the maximum extent of the law and Bouchard must be fully held accountable for his horrific actions that have stolen the lives of two young men and traumatized the many who knew them.

In August 2018, Bouchard pled guilty to two counts of second-degree manslaughter. In return for the plea, Bouchard will be expected to be sentenced to 3.5 to 10.5 years in prison. This amount of time recommended is grossly inappropriate for the grave and horrendous killing of two people that Bouchard committed. Second-degree manslaughter is a class C felony and is punishable for up to 15 years in prison. Taking into account the fact that Bouchard pled guilty to two counts of this crime, the recommended 3.5 to 10.5 years imprisonment far undercuts the just extent to which Bouchard should be sentenced and punished. Despite what Bouchard agreed to in his plea deal, the final decision of sentences rests with Judge Fernando Camacho.

We, the undersigned, demand that Judge Fernando Camacho exercise his authority and discretion over sentencing to:

1. Sentence Christopher Bouchard to the maximum permitted time in prison for both counts of manslaughter regardless of what was agreed to in his plea deal.

2. Impose consecutive sentences for both counts of manslaughter so that Bouchard will be justly punished for taking the life and killing not one, but two young men.