Sustained mass actions against PDAF corruption in the Philippines 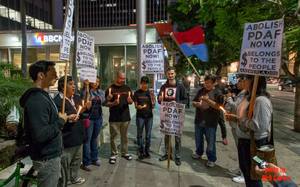 Below is a press statement released by the United States Against PDAF Coalition. Chapters of the ANSWER Coalition participated in many of these demonstrations across the country, standing in solidarity with the mass movement against corruption in the Philippines. Click here for more information on the struggle against PDAF.

Our nation-wide coordinated mass actions from September 20 to 23, 2013 were a resounding success!

The United States Against PDAF or Pork Barrel System (USAP) Coalition commends all its allies and affiliated organizations for the success of its national coordinated mass actions in the United States from September 20-23, 2013. For USAP Coalition, this means the fire and the deep concern in the Filipino Community is alive and well in its solidarity with the people’s demand to end the culture of corruption in the Philippines.

From the west coast to the east coast, hundreds of Filipino-Americans responded with different kinds of mass actions. From prayer rallies to vigils, mass demonstrations and picnics to consulate hopping, petitions and community forums all mobilized and acted for the Filipino people.

Mass Actions from West to the East Coast

-Sept. 20 in Los Angeles: Scores of activists from the Alliance-Philippines, KmB Pro People Youth and ANSWER-LA led the candle light vigil at the Philippine Consulate. They also paid tribute to all victims of martial law in the Philippines in their one hour picket rally.

-Sept. 20 in Washington, D.C.: Hundreds of Filipino-Americans led by the US Pinoys for Good Governance and the Migrant Heritage Commission (MHC) rallied in front of the Philippine Embassy. They were met by Embassy officials who received their formal protest notes. The group brought a roasted pig (Lechon) and ate it in a symbolic unmasking of the pork barrel scams against the people. That was their creative way of protest eating!

-Sept. 20-21 in San Francisco: The US Pinoys for Good Governance (USPGG) and Justice for Filipino American Veterans joined forces and picketed in front of the Philippine Consulate on Sept 20. The next day despite the rain, on Sept 21, the same group held a rally in front of the San Francisco City Hall at the Civic Center to mark the 21st year of martial law.

-Sept. 23 in New York City: The Fil-Ams in New York led by DAMAYAN and Ugnayan youth group picketed the different consulates on the East Coast to call their attention to domestic labor trafficking and ended their pickets with a rally in front of the New York Philippine Consulate.

The Senate Must Do its Job

Meanwhile, USAP asks the Philippine Senate to convene the Senate Ethics Committee and initiate the filing of a complaint against their colleagues involved in the PDAF Scam. Members of the Senate including those involved in the PDAF scandal are not above the law. The Senate has the inherent power to discipline its members: either by suspension and/or expulsion as the case may be. Let the Senate Blue Ribbon Committee do its job and subsequently work with the convened Senate Ethics Committee.

For USAP, we again reiterate our stand that no one is above the law. President Aquino and all those in authority must resolve these issues within the next 100 days. The Sandiganbayan must suspend those with charges for plunder, arrest them and trials must be held expeditiously.

Resolve the Cases in 100 Days

Again the USAP Coalition chided the Senate that this investigation is fast becoming another soap opera. Now the President and even Congress are asking the SC to lift the TRO and to throw out the petitions to declare the pork barrel system unconstitutional. If Congress, the Ombudsman and Sandiganbayan will not do their job, then these corrupt officials must be removed by Peoples Power. That is the highest form of democracy. And let them all be ready for these mass actions after the 100 days that we have given them.