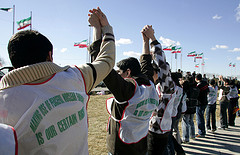 Thank you for your support in the ongoing struggle against war and intervention. We are writing to ask you to help stop military or economic aggression against Iran. Click here to sign on to a new international appeal.

In the midst of growing U.S. hostility, including the imposition of a new round of economic sanctions, a delegation of activists from the United States and Canada recently traveled to Iran to express solidarity with the people of Iran and to oppose U.S., UN, and European Union military threats and sanctions.

Washington’s use of sanctions against Iran constitutes an act of war. Sanctions imposed by the U.S. and other western powers are meant to create hardship and suffering with the aim of destabilizing governments that resist domination by the U.S. The genocidal U.S./UN sanctions against Iraq were designed to  weaken that country and prepare the groundwork for massive bombing and eventual occupation. More than two million Iraqi people have died as a result of two U.S. wars and the devastating sanctions/blockade.

A Declaration calling for “Solidarity with Iran – SI” was initiated by the House of Latin America (HOLA), Iranians who have worked in solidarity with the Latin American progressive movements for several years, and who are now mobilizing international support for Iran’s people and the country’s right to its sovereignty.

This important declaration is presently being circulated around the world.

The ANSWER Coalition is asking supporters to:

U.S. and its allies impose new sanctions on Iran

A history of colonial intervention

SI - Solidarity with Iran! Appeal
A project of House of Latin America – Iran


House of Latin America (HOLA), an Iranian NGO dedicated to solidarity and defense of the peoples of Latin America and the people of Iran, has initiated the following appeal to individuals and organizations worldwide to join with them in a campaign of solidarity with Iran in light of U.S. escalating threats and continuing sanctions.

Whereas, the escalating sanctions and threats of military intervention against Iran are intended to deprive the Iranian people of their internationally recognized right to live as an independent and free nation;

Whereas, the sanctions and threats are clear violations of Article 2 of the UN Charter, according to which member states must “refrain in their international relations from the threat or use of force against the territorial integrity or political independence of any state”;

Whereas, the United States is unequivocally obligated under the bilateral 1981 Algiers Treaty to refrain from interfering in the internal affairs of Iran;

Whereas, sanctions often pave the way to war;

Whereas, Iran, as a signatory of the Nuclear Non-Proliferation Treaty, has an “inalienable right” to develop and use nuclear technology for peaceful purposes;

Whereas, according to the International Atomic Energy Agency, there is no evidence to back up the charge that Iran is “planning to produce nuclear weapons”;

Whereas, the hegemonic lobbies that portray Iran as a threat to peace today also lied about imaginary weapons of mass destruction in Iraq to convince the public that war was necessary;

The people of the world cannot allow such a crime against humanity.

Therefore, I (we) join with all who stand for justice, peace, sovereignty and self determination in raising my (our) voice to demand:

* Lift economic sanctions against Iran.
* Recognize the right of Iran to develop and use nuclear energy for peaceful purposes.
* Stop military threats against Iran.