Solidarity with the SU Trans* community! 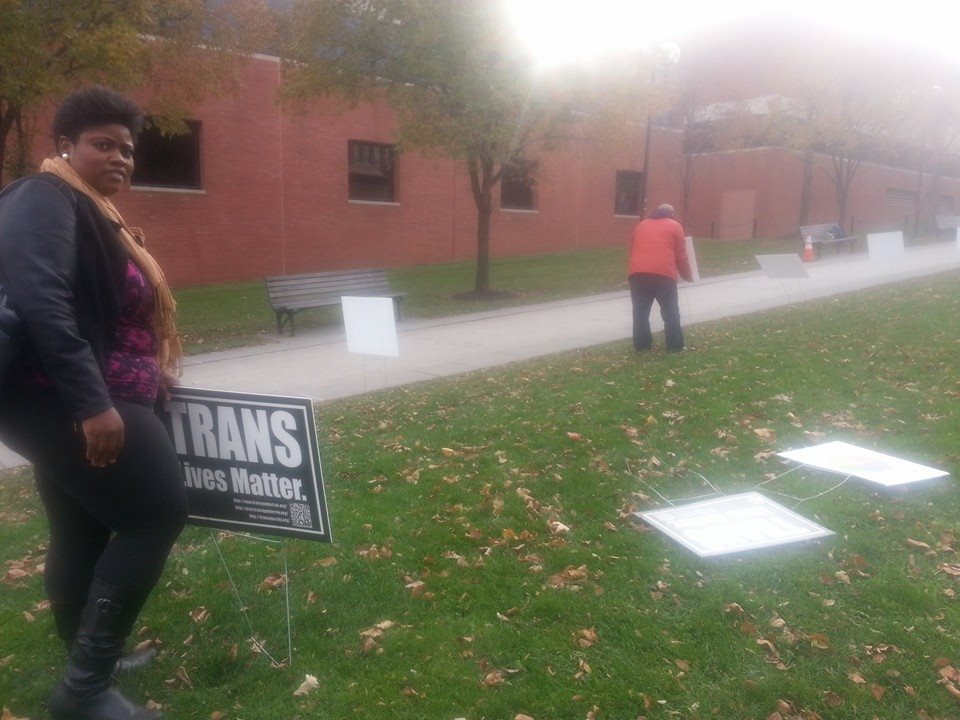 Members of the LGBTQ Resource Center gather the remnants of the "Trans* Lives Matter" picket signs after the bigoted vandalism.

I am writing on behalf of the Syracuse University branch of the ANSWER Coalition and as a queer-identified individual to express our deep regret and anger concerning the vandalism of the LGBT Resource Center’s Trans* Lives Matter installation between Newhouse and Schine. This cowardly act of destruction on the part of bigoted individuals reveals the degree to which heterosexism dominates public life and promotes systemic violence against LGBTQ people, specifically trans* individuals.

Whether or not this was a calculated act of hatred or a prank is irrelevant: this was a direct attack against the most vulnerable segment of the LGBTQ community. Trans* individuals face physical violence at twice the rate of other members of the LGBTQ community. Trans* individuals face increased discrimination in terms of employment, housing and healthcare. Furthermore, trans* identities are constantly scrutinized, policed, ridiculed and degraded by heterosexist society and even face discrimination from members of the queer community.

Syracuse University, if anyone is to take its calls for inclusion, diversity and respect seriously, must do its upmost to investigate this act of vandalism and prevent similar occurrences from happening in the future. Violent language and actions, even when they are not directed against people, send a clear message about how it is “acceptable” to treat certain communities. The destruction of this installation makes it perfectly clear that certain individuals on campus do not believe that the message of trans* rights matters. This kind of action is unacceptable on (and off) campus and should not be allowed to happen again. Syracuse University should make it perfectly clear that it takes this matter seriously and foster a safe, inclusive environment for all of its students. This was not just an attack on the trans* community.

Unity is fundamental in overcoming oppression based on race, gender, sexual orientation or gender identification. It is for this reason that members of the LGBTQ community must stand in solidarity with trans* individuals and recognize that any attack on trans* rights is an attack on LGBTQ rights in general. Any gay/lesbian organization that sidelines trans* issues is doing a great disservice to the LGBTQ community as a whole.

Furthermore, all students should reject this kind of bigotry and violence and recognize that the fight for trans* inclusion and rights is a fundamental element of the fight against persistent racism, sexism and heterosexism.

Finally, we stand in solidarity with Pride Union and the LGBT Resource Center and applaud their efforts to make Syracuse a safer and better place for the LGBTQ community. Even though racism, sexism and heterosexism will not be overcome without arduous struggle and systemic change, it is imperative to organize for change now and never give up on the fight for equal rights and liberation.