Solidarity with the Mi'kmaq Nation 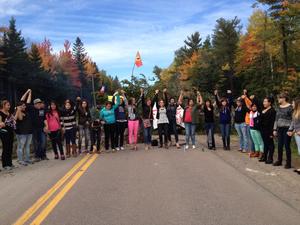 The ANSWER Coalition stands firmly in support of the courageous Mi’kmaq Nation and its fight against the outrageous intrusion on their territorial lands. Their continuing struggle to be recognized as a sovereign nation with all the rights granted in treaties negotiated many years ago is an inspiration to all progressive people. We stand in solidarity with their brave refusal to allow the waters of their ancestral lands to become polluted by massive amounts of chemicals used in the extraction of natural gas.

The Mi’kmaq Nation has come under vicious attack by the Canadian government, especially the Royal Canadian Mounted Police, but history shows that no amount of repression can break the will of oppressed people to resist. The destruction of the earth and waters solely for profit by massive corporations such as Southwestern Energy has to be confronted. We acknowledge the struggle of the Mi’kmaq Nation and encourage all our supporters to attend solidarity actions.