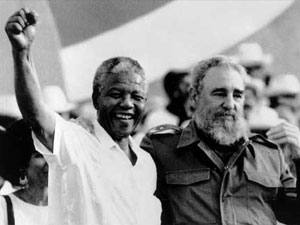 The following statement was issued by the Office of the African National Congress Chief Whip and is reposted from the website of the National Committee to Free the Cuban Five.

The Office of the ANC Chief Whip welcomes the resolution of the National Assembly at its sitting last night calling for the immediate release and freedom of the remaining members of the Cuban Five. The Cuban Five are five Cuban men who were accused by the United States government of committing espionage and conspiracy against the United States of America, and as such were imprisoned since 12 September 1998. Two of the five men, René González and Fernando González, have since been released, in 2011 and 2014 respectively.

The formal resolution of the South African Parliament calling the United States to release the Cuban Five, lift the economic blockade of Cuba and immediately engage Cuba more positively is a significant contribution to this international campaign, and further speak volumes about our country's political pursuit of peace, justice, reconciliation and human rights internationally.

Parliament's debates and resolutions on important matters such as this reaffirms the activist nature of the institution, which conducts its business robustly, fearlessly and asserts its role on international matters. Recently, the House passed a resolution on the Gaza situation.

The resolution of the House on the Cuban Five was based on the draft resolution tabled by the African National Congress Chief Whip, which called on the House to:

1. note that the Cuban Five are five Cuban men who were charged by the United States government of committing espionage and conspiracy against the United States of America, and as such were imprisoned since 12 September 1998;

2. remember that the Cuban Five's actions were not directed at the United States government, and that they did not engage in, nor plan any conspiracy against the government, but rather that they infiltrated terrorist organisations in Miami who were planning terrorist attacks on Cuba;

3. further remember that they did not harm anyone nor did they possess or use any weapons on their mission which was simply to protect the people of Cuba from terrorism;

4. believe that the United States should have worked with the Cuban Five clandestine anti-terrorist operation to prevent criminal acts and to deter terrorism in whatever form and wherever it came from as it is a growing threat to global stability;

6. call upon the South African government, civil society and all South Africans to join the world in solidarity with the Cuban Five, and actively participate in forums, media, publicity work, marches and petitions geared at demanding the immediate release and freedom of the remaining members of the Cuban Five; and

7. further call upon the President of the United States of America to lift the blockade immediately and engage Cuba more positively.

The resolution of the House will be sent to both the Cuban and American embassies for the attention of their governments.