Boston: Speakout and March against slavery in Libya! 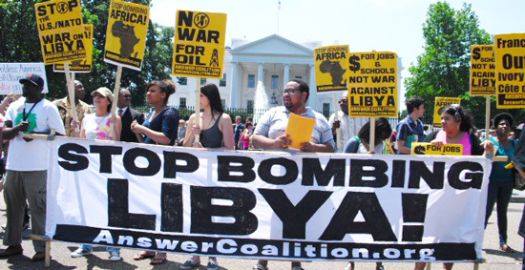 Following the 2011 NATO-backed civil war in Libya that illegally ousted the former leader of Libya, Muammar Gaddafi, the country has been thrown into statelessness and utter chaos. Libya was once Africa's most prosperous nation. Now, the country is struggling with the re-introduction of outright chattel slavery.

The big imperialist powers - the United States, Great Britain and France - along with their junior partners and loyal watchdog states in the Middle East (Saudi Arabia and Israel) waged an illegal and neo-colonialist war based on lies. Both Hillary Clinton and Barack Obama, as well as the entire U.S. imperialist system, are the cause of the slavery we see in Libya today.

The U.S. government has its eyes on other countries like Iran and North Korea. They too face the destruction that Libya has. But history has shown that with struggle the people can overcome any attack. The ANSWER Coalition held several demonstrations against the predatory war on Libya in 2011, and today we are continuing in our work for solidarity with Libya as they deal with the consequences of "our" government's heinous actions.

Join us to demand:

Get involved: Attend an art build on Dec. 8 - more info