Stand with Anti-War Activists Targeted by the FBI! 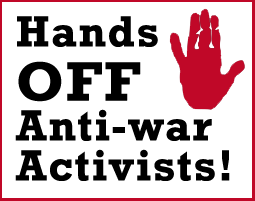 The ANSWER Coalition unequivocally condemns today's FBI raids on the homes of anti-war and solidarity activists in Illinois and Minnesota, and the intimidation of activists there and elsewhere.

This morning, Sept. 24, teams of FBI agents from the "Joint Terrorism Task Force" served search warrants and grand jury subpoenas on the activists, allegedly relating to political speech in defense of the Palestinian and Colombian peoples. The FBI subpoenaed around a dozen activists to testify before a grand jury in Chicago in October. They confronted and intimidated activists in additional states as part of the operation.

Grand juries are notorious political tools used by the government against progressive activists when it lacks actual evidence against them.

The targeted activists have done nothing wrong. They are long-time organizers in the struggle for justice in the United States and against U.S. wars and repression abroad. They are leaders of organizations like the Twin-Cities Anti-War Committee, the Palestine Solidarity Group, the Colombia Action Network and the Freedom Road Socialist Organization, among others. Many of the targeted activists helped organize the successful mass mobilizations at the RNC in Minneapolis, Minn. in 2008. Now, the government is attempting to implicate them in a bogus federal “terrorism” investigation. These allegations are baseless, reactionary and wrong.

The aim of the FBI raids is clearly the suppression of free speech and dissent. The government wants all activists to be afraid to speak out. And the Obama administration’s Justice Department is now leading the charge. But we cannot allow the government to stamp out the right of people to advocate for political beliefs that do not align with the aims of the Pentagon war machine. We cannot allow them to continue to erode our civil rights and civil liberties.

ANSWER encourages all anti-war activists to follow the example of the targeted activists if you are confronted by the FBI or other police agencies. The activists have refused to engage in conversations with the FBI about their political beliefs and anti-war organizing.

It is important for all activists and organizers to know your civil rights. People have the right to remain silent and to consult with an attorney. Even if the FBI shows up at someone's home or office with a warrant, you are not required to engage in conversation. It is better to say to FBI or other law enforcement agents, "Let me have your contact information and my attorney will call you." People will gain nothing by engaging in discussions with FBI officers.

ANSWER stands in full solidarity with our targeted sisters and brothers in the anti-war movement. We vow to struggle alongside them until the government harassment ends and they are completely vindicated.