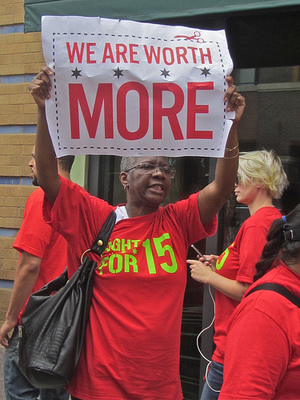 Low-wage workers will make history on Aug. 29 during a national day of strikes demanding a living wage. Courageously challenging some of the biggest corporations in the world, these actions are a major development in the struggle for dignity on the job.

These strikes will be the latest in a countrywide organizing campaign fighting for a $15 an hour wage and to force corporations to respect the rights of their employees. Until now, this has largely taken the form of citywide mobilizations, giving Aug. 29 additional significance.

In many areas, fast food workers have taken the lead, and it is easy to see why considering the outrageous level of exploitation that exists in this industry. A fast food worker makes on average $15,080 dollars a year, not nearly enough to support oneself or a family, but the average fast food executive makes $25,000 per day.

Similarly absurd are arguments put out by defenders of big businesses that raising wages would lead to higher prices. McDonald’s, Burger King and Wendy’s made a combined total of $5.6 billion in profits last year – they are more than able to afford to pay a living wage.

The ANSWER Coalition joins with progressive-minded people across the country in expressing our solidarity with the historic Aug. 29 low-wage workers strike, and is committed to mobilizing support for this ongoing struggle. Click here to find out more about the low-wage workers campaign and watch a promotional video for the Aug. 29 strike.