The following statement was issued by AWC-Japan, an anti-war organization on the front lines of the growing struggle against the militaristic Abe government. 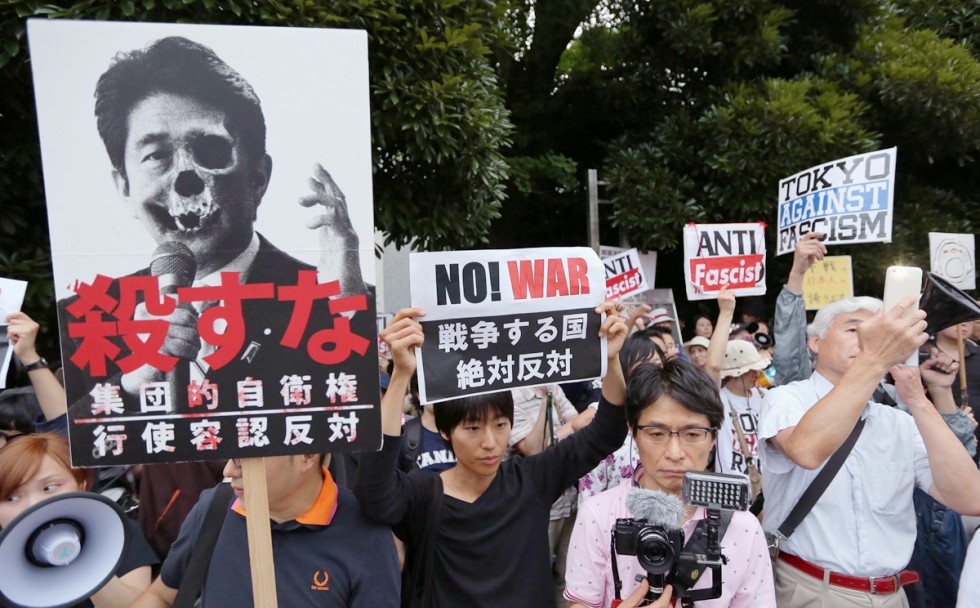 1. The statement on the 70th anniversary of the end of World War II, which Prime Minister Shinzo Abe released on August 14, 2015, is deceptive. It distorts historical fact, instead of squarely facing it. We can never accept it. AWC-Japan vehemently condemns Abe’s statement.

2. In this statement, Prime Minister Abe did not describe the past war that Japanese imperialism had carried out on the Asia-pacific region as “war of aggression” eventually. During a press conference after the release of the statement, PM Abe said, “I’d like to leave up to historians to discuss what constitutes aggression.” These are unforgivable, reckless remarks.

3. Due to his such attitude, it is very vague what kind of acts and to whom he express “remorse” or “apology” in the statement. PM Abe just introduced the “position articulated by the previous cabinets”, and avoided to expressing “remors” or “apology” in his own words. In conclusion, PM Abe has no intention to reflect and apologize about the war of aggression and colonization that Japanese imperialism had carried out in the past.

4. The Abe statement describes the sufferings of Japanese personal during the World War II with many words. However, it almost never refers to the tremendous sacrifices of people in the Asia-Pacific region concretely. The statement does not mention Japan’s colonial rule of Taiwan and the Korean peninsula at all. Moreover, it glorifies the Japan-Russia War, saying it “gave encouragement to many people under colonial rule from Asia to Africa.” But in reality, it was an inter-imperialist war over control of the Korean Peninsula and Northeast China and those areas became main battlefields of the war. The statement extremely distorts the historical facts.

5. Prime Minister Abe only mentions “the United States, Australia, and European nations, which Japan had fiercely fought against as enemies.” However, those who fought against Japanese imperialism during the period of World War II were not just people of those countries. The unyielding people’s resistance in different areas of the Asia Pacific region was the main factor that caused Japanese imperialism to be defeated in war. PM Abe cannot face up to the historical facts.

6. In addition, Prime Minister Abe says, “there were women behind the battlefields whose honor and dignity were severely injured” or ‘the dignity and honor of many women were severely injured during wars.” Who injured their honour and dignity? The direct involvement of the Japanese army with the so-callled “comfort women” system is a clear fact, even though PM Abe is eager to deny it. What the Abe administration should do is to express its official apology as the Japanese government with clear words and implement state compensation to victims of Japanese military sexual slavery system and all other victims of war of aggression and colonization that Japanese imperialism had carried out, instead of obscuring state responsibility with general words.

7. The Abe Statement also says that Japan should “hoist the flag of ‘Proactive Contribution to Peace’ and contribute to the peace and prosperity of the world more than ever before.” As is well known, the Abe administration is pushing through the new security bills with the excuse of the “Proactive Contribution to Peace” just now. The bills enable Japanese Self Defense Forces (Japanese army ) to carry out wars of aggression and military intervention on the Asia Pacific region and the rest of the world under the pretext of exercising of the Collective Defense Right. By putting in these words in nearly last sentence of the statement, Prime Minister Abe expresses his intention to not reflect on Japan’s history of aggression, and reveals his ambition for building up Japan as a ‘War State’.

8. Again, we AWC-Japan condemn Prime Minister Abe’s statement on the 70th anniversary of the end of World War II. We also vehemently denounce cabinet members and lawmakers’ visit to the Yasukuni Shrine and Abe’s ritual offering to it on August 15, 2015. Through their own behavior, they reveal their real intention and ambition again. We never accept their maneuvers toward building-up of Japan as a ‘War State’. We will fight with all our might for scraping the new security bills or ‘war bills’, and bringing down the Abe administration that tries to distorts history and pave the way for war of aggression.