Step up the struggle on Sat, March 19: Resist the war machine! 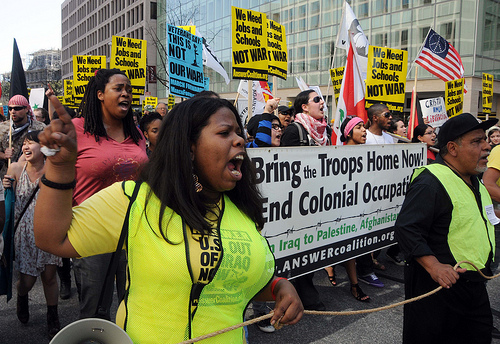 From Egypt to Wisconsin to Los Angeles: The people have the power. All out on March 19!

A renewed wave of struggle is gaining momentum abroad and at home. From Tunisia and Egypt to Wisconsin and Ohio, people are coming together and courageously fighting against oppression. These inspiring examples have shown to the world that real change is not only possible but inevitable when confronted with a militant mass movement that will not back down in the face of injustice.

It’s time to step up our struggle. On March 19, we will take to the streets in an international day of action against war and occupation.

Today, Iraq remains occupied by tens of thousands of U.S. soldiers and foreign mercenaries. The war in Afghanistan is raging. The U.S. is invading and bombing Pakistan, financing endless atrocities against the people of Palestine, relentlessly threatening Iran, stepping up hostility against progressive governments in Latin America, and bringing Korea to the brink of a new war.

The wars abroad are directly connected to the war on working people at home. While the United States will spend $1 trillion for war, occupation and weapons in 2011, 30 million people in the U.S. remain unemployed or severely underemployed, and cuts in education, housing and health care are imposing a huge toll on the people. The attacks against public-sector workers in Wisconsin and Ohio are only the latest volley of attacks on working people from the corporate elites and their political representatives.

It doesn’t have to be this way. Now more than ever it is clear that our movement must stay in the streets. Join us on March 19 across the country to say: U.S. Out of Afghanistan and Iraq Now! End Occupation! Fund Jobs, Health Care and Education—Not Militarism! Stop the Budget Cuts and Attacks on Unions and Working Families!

Click the links below to get involved with March 19 in Los Angeles:

Other protests across the country

In addition to Los Angeles, there will be protests in many cities and tows across the country and around the world. Here are details about other actions in the United States.

Many people coming to Washington, D.C., will be also participating in the Sunday, March 20 demonstration at the Quantico Marine Base in Virginia to support PFC Bradley Manning. Quantico is one hour from D.C. Manning is suspected of leaking Iraq and Afghan war logs to Wikileaks. For the last eight months, he has been held in solitary confinement, pre-trial punishment, rather than pre-trial detention.

On March 19 in San Francisco, people will gather at 12 noon at UN Plaza (7th & Market Sts.) for a rally and march.

In Chicago, people will converge on March 19 at Michigan and Congress at 12 noon for a march and rally.

Click here for details about demonstrations taking place across the country.

Please make an urgently needed donation to help pay for banners, posters, leaflets and all the other costs associated with building this mass mobilization.