The ANSWER Coalition supports the important work of the Stop Banking the Bomb Campaign.

View upcoming events here and read about recent events below. 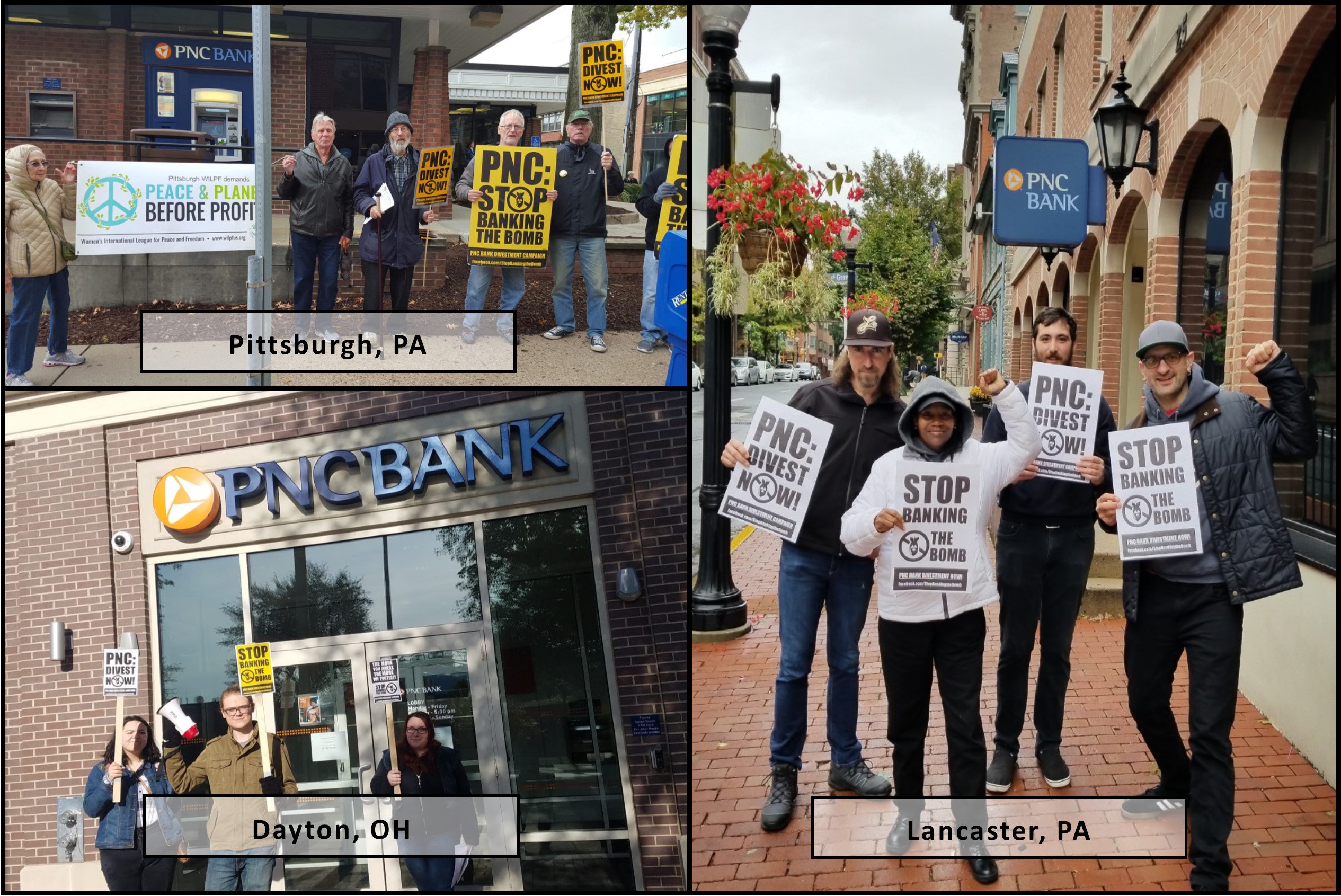 October 13 marked just over a year since Stop Banking the Bomb began its campaign against PNC Bank. Starting with just a handful of Pittsburgh volunteers from the ANSWER Coalition, Veterans For Peace, the Party for Socialism and Liberation and a few other anti-war activists, the campaign is now sponsored by over 30 local, regional and national anti-imperialist organizations. Since launching in late September 2017, the campaign has conducted over 40 actions against PNC Bank in Pittsburgh and around the country.

The Stop Banking the Bomb campaign against PNC Bank was started because a few Pittsburgh-based anti-war organizers wanted to bring to the public’s attention that PNC Bank, which is the nation’s seventh largest bank, was a notorious investor in U.S. weapons of mass destruction. We want people to know that it is the finance-capitalists who back illegal and immoral U.S. imperialist actions around the world, which includes terrorizing our planet with nuclear weapons capable of destroying all life.

PAX International reports that PNC Bank has loaned over $600 million to imperialist corporations which manufacture nuclear weapons, including Northrop Grumman, General Dynamics Textron, Bechtel, and BWX Technologies. These weapons are paid for, not just by our tax dollars, but also with the deposits we put into these criminal banks.

PNC Bank likes to promote itself as a community-responsive bank, sponsoring non-profit groups in Pittsburgh and various local sports teams. But one look behind the curtain and we can find the evil imperialist puppet masters who are at the helm of all major U.S. banks. The Stop Banking the Bomb campaign discovered that the CEO of PNC Bank is none other than William Demchak. Demchak is well-known for his unscrupulous business practices. While at J.P. Morgan, Demchak was known by his peers as the “Prince of Darkness” for the ways he was willing to skirt ethical business practices to make more money for the capitalist class.

In an article from the New Yorker, writer John Lanchester reported, “Bill Demchak, a ‘structured finance’ star at J. P. Morgan, took the lead in creating bundles of credit-default swaps—insurance against default—and selling them to investors. The investors would get the streams of revenue, according to the risk-and-reward level they chose; the bank would get insurance against its loans, and fees for setting up the deal.” Demchak’s brainchild was the start of the “sub-prime” scandal that cost U.S. taxpayers over $700 billion in 2008. Instead of being in jail for defrauding the people, Bill Demchak was rewarded with the presidency of the nation’s seventh largest bank.

Our fight against PNC Bank and its investments in nuclear weapons manufacturers is an important and timely one. We must get the public to see how the Military Industrial Financial Complex works to steal not only our tax dollars for death and destruction but also our savings and deposits in for-profit banks that care nothing about people. PNC Bank will put profit above all of us, even if that means nuclear annihilation.

To mark our one-year anniversary, on October 13, the campaign conducted its first triple city coordinated action against PNC Bank. Working with our ANSWER Coalition and PSL allies in Dayton, OH and Lancaster, PA, we held three actions in three cities in front of three PNC Banks.

These pickets will continue unabated, every two weeks in Pittsburgh, PA and in many other cities around the country. We will not stop until PNC meets our demands to STOP BANKING THE BOMB!