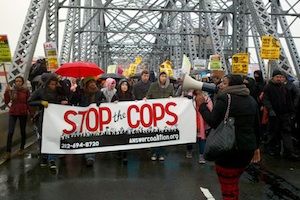 Demanding an end to police brutality, a march of hundreds in New York City showed the New York Police Department that no amount of repressive, racist violence can break the people’s will to resist. The demonstration, titled “Stop the Cops,” was organized by a broad coalition of groups including the ANSWER Coalition (Act Now to Stop War and End Racism), Stop "Stop and Frisk," Women Organized to Resist and Defend, Cop Watch South Bronx and Harlem, and the Party for Socialism and Liberation.

Protesters assembled to demand an end to the frisking and brutalization of youth, the targeting of immigrant and Muslim communities, and the harassment of women and LGBTQ people.

The march began at 138th and Third in the South Bronx, one of the neighborhoods that has been most devastated by the NYPD. Despite the cold temperature and constant rain, hundreds of activists and community members gathered for an opening rally, each with their own particular set of motivations but united by a desire to fight for justice.

March participant Luss Nigaglioni, who himself has been a victim of police harassment, expressed frustration that officers are “mostly targeting our youth” but was energized by the demonstration, which he said was “a good sign of resistance.”

Camille Raneem told Liberation News that police brutality is one component of a larger system of mass incarceration, which “starts with the criminalization of young people.” “Mass incarceration is a tool of control” that “keeps people from working to make changes,” added Abigail Brune.

Protester Helena Wong pointed out that the “Southeast Asian community faces a lot of detentions and deportations,” while Carman Neely of Harlem Pride agreed that the police disproportionately target LGBT people.

Before the demonstrators took to the streets, a number of speakers energized the crowd. One was ANSWER Coalition activist and South Bronx resident Emmanuel Pardilla, who spoke about the daily abuses youth of oppressed communities experience at the hands of the racist police force.

Protesters then took their message to Harlem, marching from the South Bronx to 125th and Adam Clayton Powell Jr. Blvd. Community members along the march route cheered as the demonstration went by and joined in the chanting. Favorites included, “No justice, no peace, no racist police!”, “Policia Asesinos!” and “How do you spell racist? N-Y-P-D!”

As the marchers arrived at their destination, another round of speakers kept the momentum going at a rally chaired by march organizer Kerbie Joseph of the Party for Socialism and Liberation. Eugene Puryear of the Washington, D.C.-based organization Jobs not Jails highlighted the fact that police brutality is not isolated to one city or one region but is a permanent feature of an unjust system that must be overthrown. Karla Reyes, representing Women Organized to Resist and Defend, denounced the cops’ systematic violations of the rights of women.

As part of a long history of resistance, oppressed people chose to join the Stop the Cops march and fight back against the terrorism of the NYPD. If the determination and organization on display on Feb. 23is any indication, the movement against police brutality will continue to grow and challenge the entire system of exploitation and oppression.