Trump ready to start nuclear war in Korea - The people say no! 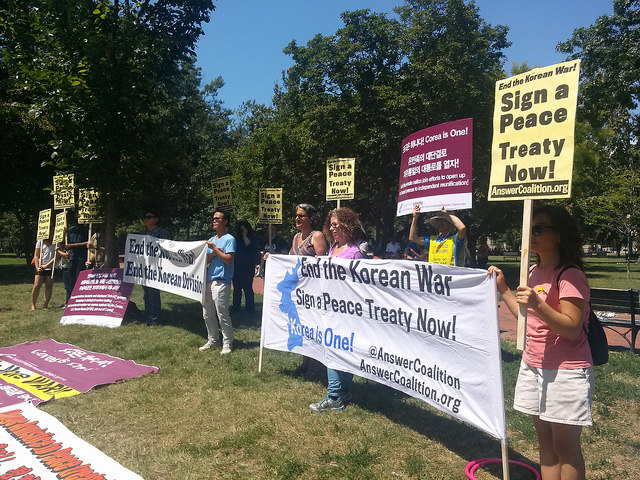 Donald Trump's infamous "fire and fury" statement has made it absolutely clear that the United States, not North Korea, is the aggressor. Trump's comments, making reference to "power the likes of which this world has never seen before" on the day that the world mourns the anniversary of the U.S. atomic bombing of Nagasaki, can only be interpreted as threatening the nuclear destruction of North Korea.

This was followed by even more provocative statements. On Thursday, Trump said that"If anything, maybe that ['fire and fury'] statement wasn’t tough enough" and threatened, "an event the likes of which nobody’s seen before."

North Korea, also known as the Democratic People's Republic of Korea, asserted its right to hit back in retaliation to any military aggression, as is the right of all sovereign countries. The U.S. military has for decades recklessly endangered the people of Guam – a colony denied its independence by the United States – by basing large numbers of strategic military assets there. Should war come to Guam, the blame would be entirely on the shoulders of the U.S. military who occupy the island without regard to the will of the people.

While the in-your-face imperial arrogance of Trump's statements may be new, the policy of nuclear blackmail has been used by the United States in Korea for over half a century. During negotiations at the end of the fighting in the Korean War, the United States said it would destroy the North with nuclear weapons if they did not agree to the terms of the armistice. This year's massive Foal Eagle/Key Resolve military exercises conducted by U.S. and South Korean troops included an atomic bombing drill where a U.S. bomber simulated a nuclear strike. The DPRK has offered to suspend its nuclear weapons program in return for the suspension of these drills – the United States has refused.

Some sectors of the U.S. imperialist establishment argued 60 years ago that if the People's Republic of China obtained nuclear weapons it would pose a dire and imminent threat to the United States, and these forces advocated preemptive war. More than a half century later, the United States has obviously accommodated itself to China possessing nuclear weapons and has "normalized" relations with the country. This can be and should be the path taken regarding North Korea as well.

The ANSWER Coalition condemns Donald Trump's recent outrageous comments, and is committed to building the struggle against U.S. war and militarism in Korea and in all countries. Furthermore, we demand the decolonization of Guam with reparations and the immediate departure of the U.S. military from the island.