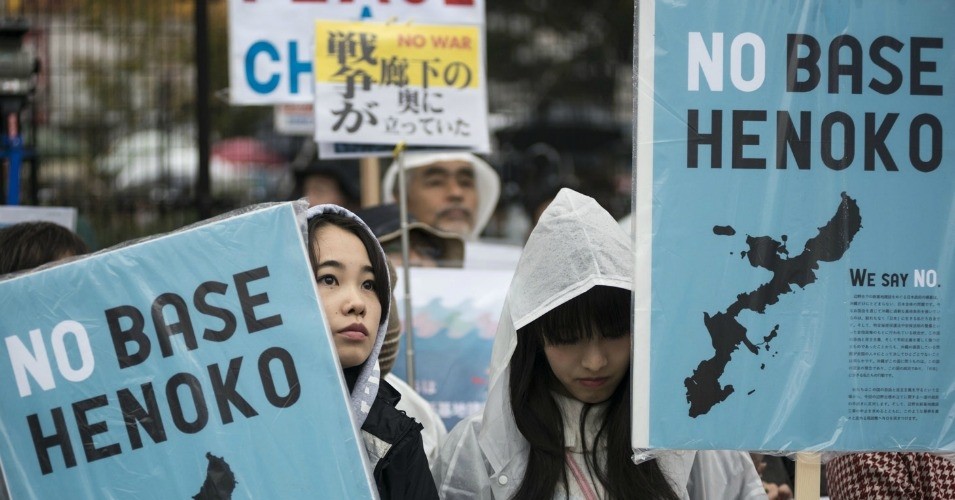 The ANSWER Coalition stands in full solidarity with the people of Okinawa in their heroic struggle to end the construction of a military base in Henoko / Oura Bay, and elsewhere. All U.S. bases in Japan and around the world must be closed and U.S. troops must be returned home.

The construction of the Henoko base is moving ahead despite overwhelming opposition from Okinawans. The base was first proposed over 20 years ago, and since then Okinawans have staged sit-ins, roadblocks, massive protests, and continuously voted against the construction of the base. In August 2018, over 70,000 Okinawans joined a protest against the Henoko base despite severe weather. The current Governor of Okinawa, Denny Tamaki, was elected on a platform of stopping the Henoko base. His final appeal to stop the stop the construction was denied on December 13, spurring further protests and international calls to action.

A growing solidarity movement has emerged with a petition to the White House demanding ‘Stop the landfill of Henoko / Oura Bay until a referendum can be held in Okinawa.’ The petition was launched on December 8 and has gathered over 160,000 signatures in two weeks. The petition will be open until January 7, and additional solidarity actions will be announced. ANSWER encourages all its supporters to join this movement and help circulate the petition.

The construction on the Henoko base could take decades, but the construction itself is already a disaster, and has now entered its most destructive phase. As of December 14, in order to create land for runways at the Henoko base, truckloads of rock and sand are being dumped into Oura Bay, a global marine biodiversity “hotspot” second only to the Great Barrier Reef. Oura Bay is home to over 5,800 species, 262 of which are endangered. Construction in Oura Bay will destroy critical habitats.

The U.S. Military is the world’s biggest polluter, but new bases bring more than environmental destruction. U.S. bases also cause noise pollution, aircraft crashes, and violent crime. Between 1972 and 2015 Okinawan police have reported 741 serious crimes involving U.S. soldiers, civilian base workers, and their relatives, resulting in local convictions for 129 rapes, 394 burglaries, and 26 murders. The Henoko base is connected directly with this history of abuse. It was first proposed to replace the Futenma base in the aftermath of nationwide outrage that exploded following the kidnap and rape of a 12-year-old Okinawan girl by three U.S. Marines in 1995.

Okinawa has been occupied since the Battle of Okinawa at the end of World War II, during which U.S. forces killed almost half of the 300,000 residents of the island. Instead of returning home afterwards, U.S. forces turned neighborhoods into bases that remain to this day. Today there are more than 30 U.S. military installations across the island of Okinawa, more that 70 percent of all those in Japan. Rent for the bases and wages are charged to the Japanese taxpayer, while those in the United States foot an additional bill of over $1 billion annually as part of the U.S. military's massive nearly $900 billion budget (including indirect costs).

The continued construction of the Henoko base is a criminal act by U.S. militarists, and displays their total lack of regard for the democracy they claim to “protect”. Yet history has shown that united struggle and mass movements can overcome even the mightiest of powers.

No to the Military Base Construction In Henoko / Oura Bay!