The struggle for immigrant rights is at a crossroads 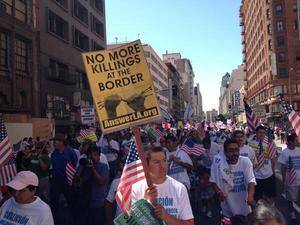 The ANSWER Coalition helped to organize a demonstration attended by nearly 10,000 people in Los Angeles on Sept. 22. The march was put on by a broad coalition of immigrant rights, community, and Central American organizations called “Millions of Voices for Immigration Reform.”

Congress has the power to amend the immigration laws to turn them from tools of deportation and oppression into administrative rules providing family unity and full rights. Yet the politicians in Washington have failed to take any comprehensive action on immigration. They remain divided on just how many rights immigrants “deserve.” Leaders in the House of Representatives have refused to bring the Senate bill to a vote on the House floor, over the vocal opposition of immigrant communities and allies across the country.

To add insult to injury, the Obama administration, which relied on the votes of millions of immigrant families in the 2008 and 2012 elections, has continued the largest deportation assault in U.S. history. The “grand deporter,” President Obama will be responsible for approximately 2 million deportations by year end, if current rates continue. The Department of Homeland Security continues to spend over $5 billion per year just on detaining and deporting immigrants.

On Sept. 17, President Obama claimed publically that it is “not an option” to freeze deportations of parents of undocumented children. While he claims he cannot make a legal argument to stop deporting people and separating families, Obama maintains that he has full legal authority to order military strikes against Syria without even obtaining Congressional approval.

The truth is that the immigration law gives the president and the executive branch, including the Department of Homeland Security, complete authority to decide whether to pursue deportation or not. With the stroke of a pen, President Obama could order a moratorium on deportations until comprehensive immigration reform passes. Obama chooses to use his vast power as president when it is in the interest of Wall Street and the Pentagon, but refuses to exercise it in favor of working people, including immigrants.

Obama could have used his television appearance to encourage people in the United States to take action on immigration by protesting the unjust laws. Instead, he criticized immigrants for “losing heart” and “thinking that there is an out” – an option besides doing nothing during legislative deadlock and mounting deportations.

If neither the president nor Congress will represent the interests of immigrant workers, then we must take matters into our own hands to demand change.

Immigrant families around the country are fighting back. On Sept. 30, 30 undocumented youth who have been forced by these immigration policies to leave the United States will attempt to re-enter in an act of civil disobedience. With civil disobedience and immigration protests taking place nearly daily, immigrants are telling the political establishment in Washington that they will not wait one more day for reform – this epidemic of deportation, fear and oppression must end now.

On Oct. 5, there will be immigration protests in over 100 cities across the country. Civil rights organizations, labor unions, communities of faith and others are participating. These actions will culminate in a huge Rally and Concert for Immigrant Dignity and Respect on the National Mall in Washington, D.C., on Tuesday, Oct. 8. Click here for a detailed listing of protests taking place nationwide on October 5.

Let’s show both the White House and Congress that we will not wait for immigration reform – we will struggle until we win! Use #OCT5 to promote the demonstration on Twitter.

Details on the Oct. 8 Rally in Washington, D.C.:

The event is sponsored by Casa in Action, SEIU 32BJ, SEIU International, the AFL-CIO, Alliance for Citizenship, Center for Community Change, the National Hispanic Foundation for the Arts, Presente.org and many others.