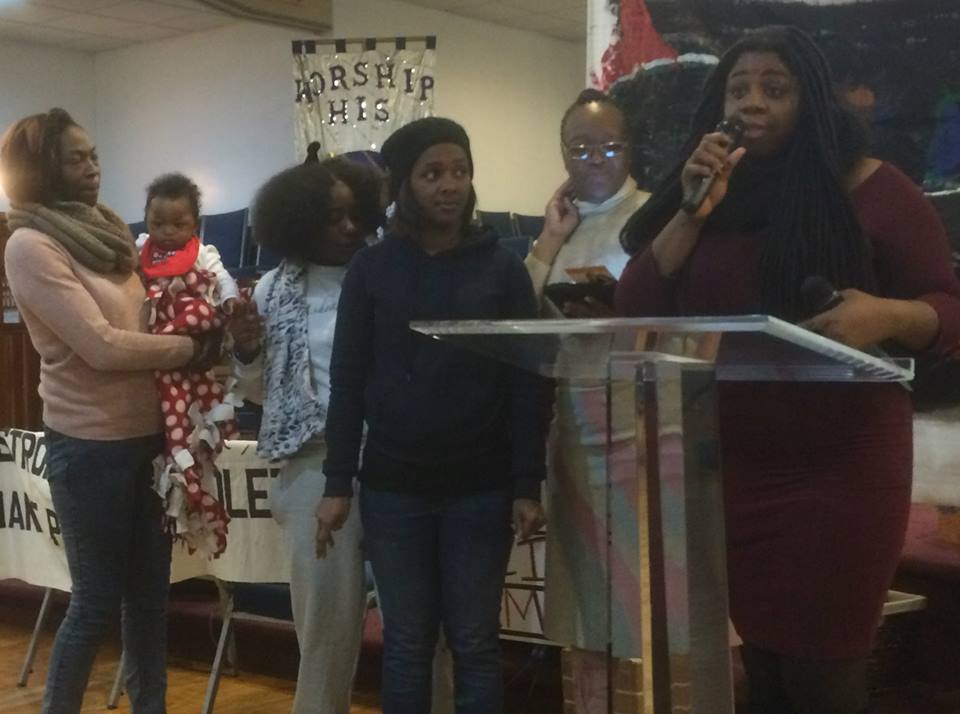 Activists, community leaders, and families of victims of police brutality gathered on Friday, February 20th to honor the 3-month anniversary of Akai Gurley’s murder at the hands of the NYPD. The action began with the
releasing of doves and white balloons as a symbol that Akai is resting peacefully as aligned with the family’s Christian faith. After the symbolic action, and despite the cold, about 40 people marched from the Pink Houses to the Southern Baptist Church for a vigil in honor of Akai Gurley.

Many of New York’s families of police brutality victims came together in this vigil. Among those present were Eric Garner’s 10-month-old daughter, Legacy Garner, and her mother Jewel Miller. In addition, Constance Malcolm, Ramarley Graham’s mother, was also present to support Akai Gurley’s family and the united struggle against police terror.

Aunt T spoke to Liberation News about the 3-month anniversary action. She explained that the purpose of the rallies is to bring justice for Akai and all victims of police brutality. “Today it was Akai, tomorrow, it could be another child,” she said. She called the continuous police murders “modern day legalized lynching.”

On Feb. 10th, Peter Liang, the rookie NYPD officer who shot Akai Gurley in an unlit stairwell in New York City public housing, was indicted for second-degree manslaughter, reckless endangerment, second-degree assault, and official misconduct. When asked her opinion regarding Liang’s indictment, Aunt T stated that the District Attorney simply did his job; he gathered information and investigated the situation. She has faith that the Gurley family will have a conviction.

Engaging in a deeper conversation regarding the conditions of NYCHA (New York City Housing Authority) housing, she demanded that we “deactivate what we’ve been told and see what’s really around us,” referring to the unfair conditions in which the most oppressed people live. “The system was not created for us, the system was created for the rich,” she stated as a final reflection.

In the vigil the unity of the women who have lost loved ones at the hands of the police department could be felt as an inspirational display of courage and motivation. They supported and showed solidarity to each other throughout the sad reality that police brutality leaves behind for the families of the victims.