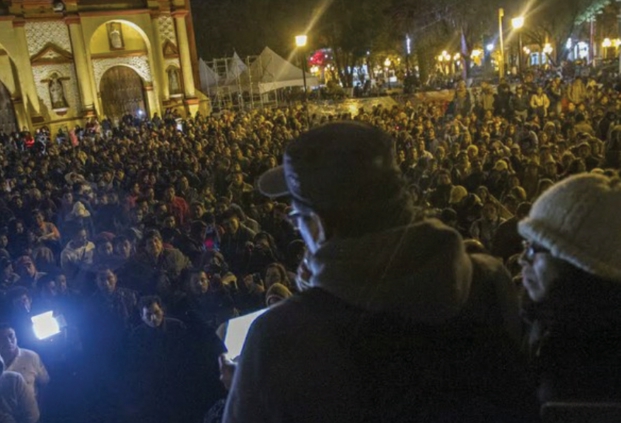 The struggle for justice for the 43 disappeared students of Ayotzinapa continues, with protests from Chiapas to Mexico City to Albuquerque to San Francisco.

In Chiapas, an inspiring display of solidarity took place in San Cristobal de las Casa between parents of the 43 students and the Zapatista EZLN leaders and community. For four hours on Nov. 15, the parents and EZLN leaders Subcomandante Moises and Comandante Tacho met expressing their full support for the parents, who arrived yesterday in a four-bus caravan from Ayotzinapa.

On Nov. 14, in San Cristobal’s Cathedral Plaza, more than 3,000 people gathered with the students’ family members for a solidarity rally.

One of the parents challenged Peña Nieto for the families: “From San Cristóbal de las Casas, the parents call on Enrique Peña Nieto to tell us clearly if you are going to look for them or not, because if not, we will take up that struggle ourselves. … Fifty days have already passed and they tell us nothing about where the disappeared are. They tell us they are dead, turned into ashes, but they say it so that we abandon the movement and stop struggling. It is inconvenient for the government that we are stirring up the people, they’re worried about the support we are getting.”

On Nov. 15, in San Francisco, close to 1,000 people marched almost three miles from the Latino Mission district to downtown’s Powell and Market streets.

The mostly young crowd of protesters demanded justice for the 43 disappeared students and an end to the impunity of the Mexican government towards murderous criminal gangs that have killed more than 100,000 people in recent years. Among the sponsors were the ANSWER Coalition (Act Now to Stop War and End Racism), Soy #132, Voluntarios del Barrio, MEChA, Bay Area Latin America Solidarity Coalition. Many students came from high schools and universities in Berkeley, San Francisco, Hayward, Oakland and San Jose.

In Mexico City, thousands marched on Friday night, Nov. 14. Across the country, militant actions and occupations are taking place and growing in militancy.

In Albuquerque, some 200 people demonstrated in front of the Mexican consulate, shouting down the representative when he said, “We have to wait for the results of the investigation,” and demanding Peña Nieto’s resignation.

After so many murders in Mexico, the tipping point is the 43 students’ disappearance on Sept. 26 at the hands of the mayor of Iguala in Guerrero, the police and the “Guerreros Unidos” gang. Many in Mexico are demanding the resignation of President Enrique Peña Nieto, who spoke not a word about the disappearances until a full 10 days later.

But the U.S. government and banks are not let off the hook either. In San Francisco, speakers laid the blame on the NAFTA free-trade agreement for creating Mexico’s economic crisis and the drug trafficking epidemic that filled that void. Others demanded no more U.S. military aid to Mexico, an end to the U.S. militarization of the border, and no more deportations.

On Nov. 20, dozens of actions are planned in at least 43 cities in the United States, in solidarity with numerous demonstrations planned in Mexico. Dec. 3 will be another day of action.