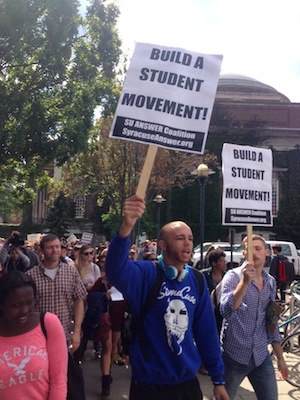 Students leading the march to the Chancellor's office 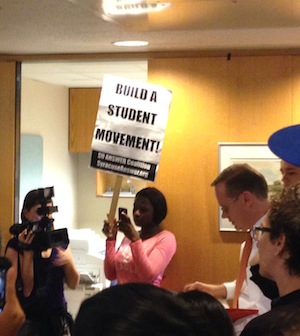 If you want a play-by-play of this rally, check out Jerk Magazine's excellent coverage here.

On Sept. 17, Syracuse University students led a bold action in their fight for a new advocacy center at SU. It was the latest expression of a new student movement that formed in response to the university's undemocratic closure of the Advocacy Center back in May.

Students began with a rally on the steps of Hendricks Chapel on the main quad. Over 150 people, including many faculty, staff, and members of the local community chanted "This is what an advocate looks like!" and "Our university, our lives, our bodies!" Several rally organizers spoke to the crowd about why they were participating in the movement. Yanira Rodriguez told the crowd that she was there fighting for her daughter, who will one day be a college student. She said that she was also fighting for the 1 in 5 women who are raped or sexually assaulted while in college.

Several others spoke, including Farrell Greenwald Brenner and Brittany Moore, undergraduate student activists who have been leaders in The Campaign for an Advocacy Center at SU. Brenner said that the AC was "a safe space" on campus that was lost. Moore, who is also a member of the Student Association, called out the administration for closing the center without consulting students and without conducting any surveys to see what students wanted. She told the crowd that the Student Association "could not make a change that would affect 14,000 students without a survey."

Derek Ford, a rally organizer and member of ANSWER Coalition in Syracuse, told the crowd that ultimately it was up to students to defend the current identity centers on campus and "to push forward for more centers, and for more rights, for more resources allocated to students." He told the crowd that "there was a logic of domination that was enacted with the closing of the Advocacy Center," a logic that he said was consistent with other systems of exploitation, including racism, sexism, and capitalism.

After the rally, students marched down the campus hill to the administration building, chanting "Patriarchy? Tear it down!" and "Hey hey, ho ho, rape culture has got to go!" Once there, student leaders read comments that were attached to an online petition against the closing of the AC. These comments, which were deeply personal, galvinized the crowd for further action.

Students then charged the administration building, and between 40 to 50 people packed the lounge outside of Chancellor Kent Syverud's office on the 6th floor. Initially students were told that the Chancellor was out of his office. After pushing back, the students were told that he was actually "in a meeting." Students refused to take no for an answer. "We won't be long, we just want to give him this petition quickly," one student said.

Next, one of the Chancellor's assistants showed up, asking the crowd to gather in another location. It was clear that the administration was trying to assert some form of power by making this request. But students refused to budge. Finally, the Chancellor appeared. Patrick Neary, president of the Graduate Student Organization presented him with a petition with over 8,000 signatures.

The action garnered a lot of media attention, which we are compiling below: