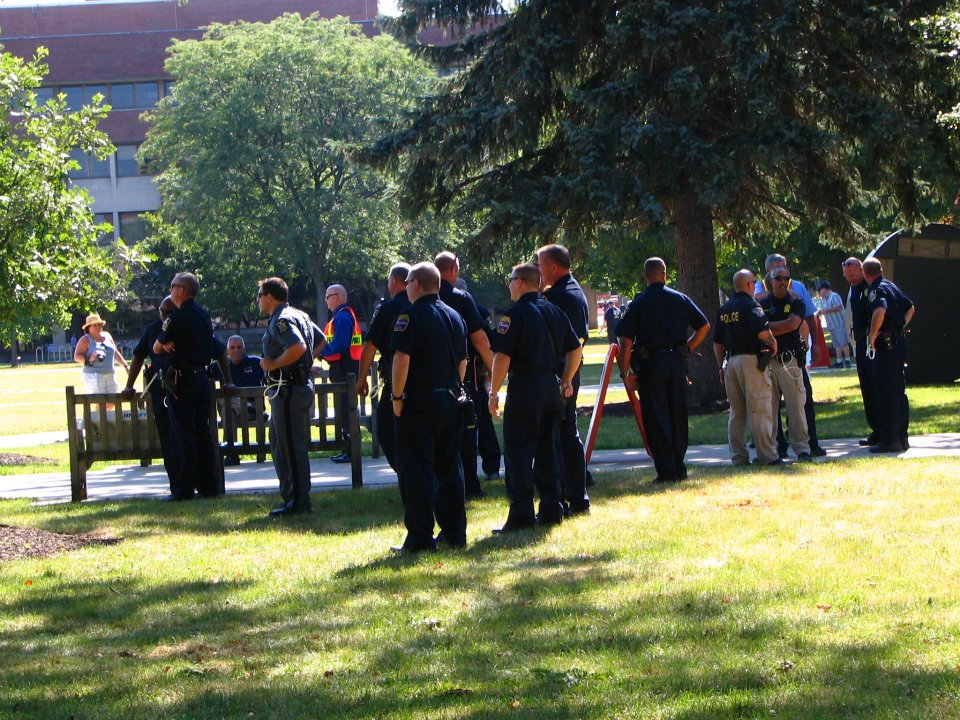 By SU chapter of Youth and Student ANSWER

On July 30, Syracuse University held a “mock disaster/training drill” on the quad. Prior to the drill, students received an extremely vague email announcing the drill with no information about the nature of it.  While the training sounds somewhat innocuous, the scene that unfolded and the implications that it has are deeply troubling for students and in urgent need of analysis and debate.

The mock “disaster” situation, organized partly by the SU Department of Public Safety, began with a staged protest. Students carried placards and chanted on the quad under close supervision of the Department of Public Safety and Syracuse Police. In reference to the Occupy Wall Street movement, there were tents erected as part of the staged protest.

Next, the fire department set a trash can on fire. At this point, the police enter the protest. In an overt reference to the Occupy Syracuse encampment, the police remove a propane tank from the outside of a tent. (Syracuse Mayor Stephanie Miner ordered the eviction of Occupy Syracuse by fabricating claims that the occupiers were violating fire codes.)

As the simulation proceeded, the students formed a human chain. One protester began swinging an aluminum baseball bat. Police began making arrests, walking students away in zip-ties and placing them on a Centro bus.

What is wrong with this picture?

The “mock disaster” scenario equated student assemblies and protests to "disasters." We think instead that the absence of a political student movement would qualify as a disaster.

There were several protests held on campus over the past academic year alone, several of which Youth and Student ANSWER helped organize, including a march to Occupy Syracuse, a counter-demonstration against Hillary Clinton and, perhaps most relevant, a solidarity protest with UC Davis students who were victims of police brutality. These protests, part of a historical continuum of student activism, bore no resemblance to the protest scenario staged at the University.

The scenario portrayed student protesters as unruly instigators of violence. This is a complete inverse of reality.

Instead, it is police violence that is an everyday occurrence in this country. In fact, a recent study demonstrated that, on average, one Black person has been killed by police or private security forces every 36 hours in 2012. Working-class youth, and especially youth of color, bear the brunt of this violence.

Our organization works closely with victims of the Syracuse City police and Onondaga County sheriffs and their families. Many of us have personally experienced the violence wielded by the police and the so-called justice system.

We strongly oppose the presence of federal, state and local law enforcement agencies on our campus. Further, we object to the militarization of our campus and are extremely critical of the cooperation between SU and law enforcement.

If Syracuse University truly wants to practice “Scholarship in Action,” it should support the rights of students to free speech and encourage political organizing, instead of interrupting our learning and working with a heavily policed role-play that equates student protests with a disaster requiring a military response.

Student organizing is no disaster!