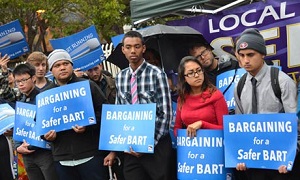 Union leaders announced late July 4 that Bay Area Rapid Transit workers would return to the job the following afternoon. This ended, for now, a four day strike demanding safe working conditions and decent wages. Management has been forced to agree to extend the existing contract for one month and continue negotiations with labor. The ANSWER Coalition continues to stand in solidarity with BART workers during this new period, and stands ready to mobilize should the strike resume.

Below is a statement issued by ANSWER while the strike was ongoing:

Bay Area Rapid Transit workers have gone on strike seeking a fair contract—one that speaks for the rights of workers and the safety of riders and workers.  BART officials and the corporate media have tried to blame the workers for the strike, painting the workers as greedy and inflexible—playing off commuter fears about a strike. This is an unfair, untrue characterization of the workers and the strike. It is BART management that is responsible.

Since the strike began July 1, workers and a wide range of community supporters have beenengaged in spirited pickets and demonstrations at BART headquarters and stations across the Bay Area. Negotiations have resumed, but despite this ongoing show of force by workers and allies BART management has submitted an insulting proposal that does not address the just demands of the union. Solidarity actions are being organized on a day to day basis; to find out the latest contact ANSWER San Francisco at [email protected] or 415-821-6545.

One major issue raised by workers is safety. In the last three years, in five stations, 2,400 serious crimes have been committed, including 1,000 physical attacks on riders and 100 on BART workers. Also, BART workers are running more trains that carry more people but with a reduced workforce. BART officials have refused to respond to worker concerns over safety—spending dollars on outside attorneys to fight safety rulings. At the bargaining table, officials have all-out refused to consider the union's rider and worker safety proposals.

Another is wages, which includes pensions and benefits. Four years ago, workers sacrificed $100 million in wage increases and work rules. They haven't had a wage increase in five years. The workers are asking for a fair wage—increases of 5 percent a year. BART officials have been offering minimal wage increases of 2% a year, while demanding increased pension and healthcare contributions —meaning that workers would actually see their pay cut!

BART officials have released inflated salary estimates and averages for workers. According to the SF Examiner, train operators and station agents make a maximum annual salary of $62,000.  A BART general manager makes $399,000 minimum!!

The ANSWER Coalition calls on community members to support the BART workers. Join the picket lines and rallies. All of us are workers who understand how important transportation is to our lives and how inconvenient it is when BART doesn't run well. But the BART workers are standing up for all workers as more and more employers demand that we pay for our own healthcare and pensions, and survive on minimal wages in one of the most expensive places in the country. The BART workers are the ones who will make sure BART does run well. They have the right to do so in safety and to be paid fairly for their work. Demand that BART officials get BART running by supporting workers' safety and guaranteeing a fair, living wage.