Why all working people should support the BART workers 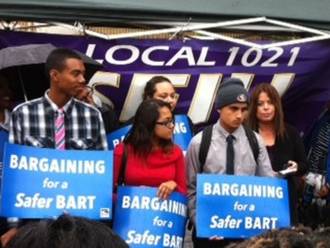 It should now be clear to all that BART management deliberately provoked the strike and is trying to blame it on the workers. Behind the BART board stands the Bay Area Council, made up of the biggest banks and corporations in the area. They and the corporate media are waging a vicious propaganda campaign against the 2,400 unionized BART workers who keep the system running. The BART board has been working hard – not to reach a contract settlement, but instead to convince the public that BART workers are overpaid. They are trying to pit BART riders against BART workers, while the rich, the 1%, get even richer. It’s a classic divide & conquer tactic.

Here are some facts, as opposed to the BART’s PR lies:

No one should be taken in by the anti-union campaign designed to pit workers against each other. It is part of the corporate-sponsored “race to the bottom,” the driving down of real wages and benefits across the country for the sake of ever-greater profits for the super-rich. Since 2009, 95% of all new wealth has gone to the top 1%. if the BART workers win decent wages and benefits, it will be a victory for all working people. Support the BART workers!