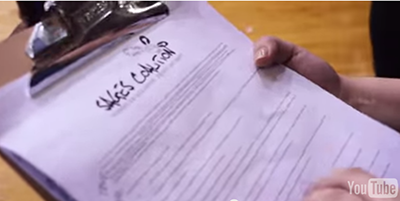 This Fall, a group of anonymous students at Fordham University in the Bronx, N.Y., have been taking action against the school's unsafe policies banning the distribution and prescription of contraceptives on campus.

Fordham’s policy denies students access to contraceptives on campus, including the prescription of birth control from the health center and the distribution of condoms. Medical personnel are prohibited from even giving advice on such matters. The Fordham administration defends these restrictions on religious grounds, though many students attend the university for its academic programs and not its religious affiliations.

Students are now taking action to demand that these policies change. S.A.G.E.S. Coalition (Students for Sex and Gender Equity and Safety) is a newly formed organization on campus that has distributed thousands of condoms throughout the dorms and at university events in defiance of the administration's unjust policy, and is circulating a petition that has already been supported by hundreds of students.

A S.A.G.E.S. spokesperson explained: “The Dean says ‘students know where to get birth control’ and ‘The University is not responsible.’ In fact, students — especially those from out of state and out of the country — often do not know where to turn. Fordham’s archaic and unsafe policies on the issue of sexual health violate students’ human rights, as defined by the UN, to birth control.” In its 2012 annual report, the United Nations Population Fund (UNFPA) declared access to contraception a human right.

No university administration should be able to deny women their right to make decisions about their health and well-being, including their reproductive health!

WORD (Women Organized to Resist and Defend) calls on the women and their allies who have been struggling nationwide to defend reproductive rights to take action in support of Fordham University students.

Across the country, reactionary politicians and groups have targeted our reproductive rights. They are trying to overturn Roe v Wade through federal and state legislation that denies women the right to abortion. There is an ongoing offensive to defund Planned Parenthood and other centers that provide reproductive health care. The Supreme Court ruled that Hobby Lobby’s owners’ religious convictions were more important than the reproductive health care of the women who work there.

As these attacks escalate, so must our fight back movement. Women’s bodies belong to no one but themselves. We should have the right to control our own bodies, and determine how and when we get pregnant and give birth. Access to contraceptives are part and parcel of reproductive health care — and shouldn’t be isolated from health care in general.

Fordham University students are doing exactly what needs to be done -- they are taking action to demand a change in their school’s policies, and hopefully they will inspire others around the country to do the same.

Now you can take action to show your support!

WORD has set up an easy-to-use mechanism on our website to allow you to send a letter to Fordham University President Joseph M. McShane to let him know that people across the country are standing behind students who are demanding access to contraception without restriction.