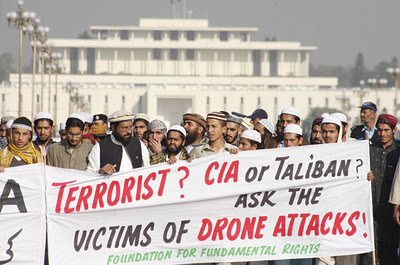 Dear Friends and Supporters of the ANSWER Coalition,

On April 13, in Washington DC, Los Angeles, San Francisco, Albuquerque, Chicago and other cities there will be a National Day of Action calling for “Drones Out of Africa, Asia, the Middle East and Everywhere.” We will also be speaking out against the threats of new U.S. wars and interventions in the Middle East and elsewhere. The Bay Area action will take place at 12 noon on Saturday, April 13, at Powell and Market Streets, in San Francisco.

U.S. drones have killed more than 5,000 people, perhaps many more, and the overwhelming majority of them have been civilians. The heaviest casualties have been in Pakistan, Afghanistan, Yemen and Somalia. Recently the Pentagon announced plans for a major drone base in Niger and a vast expansion of the U.S. military presence across Africa.

We urgently need your support and participation to make the National Day of Action as successful as possible. Please join us on Saturday, April 13, and make a donation to help with the many necessary expenses. The ANSWER Coalition is entirely dependent on the financial support of individuals like you, and we stretch every donated dollar as far as possible.

The April 13 actions will be part of a nationwide month of activities across the country opposing the rapidly expanding use of drones for murder and extremely intrusive surveillance.

There has been a vast expansion of the use of Unmanned Aerial Vehicles (drones) around the world by the U.S. military as part of the so-called “war on terror,” a war which is great for the military-industrial corporations, the big banks and oil companies, but a disaster for everyone else. The expansion of drone attacks began during the Bush administration but has increased exponentially under the Obama administration.
As of March 2011, the U.S. Air Force was training more pilots for advanced unmanned aerial vehicles than for any other single weapons system.

President Obama and his top advisers, including new CIA director John Brennan and Attorney General Eric Holder, have outrageously asserted the administration’s “right” to target and kill anyone they decide to, including U.S. citizens both inside and outside the United States. Meetings are reportedly convened by the White House on Tuesdays to review “kill lists” of potential victims with the targeted assassinations approved by the President and other top officials.

The Obama administration claims that they only target “operational leaders” of al-Qaeda. Even if this were true, launching a military attack on another country with which the U.S. is not at war is a war crime.

A “senior U.S. intelligence official” told the Associated Press that “large groups of armed men” could constitute a “signature” in Pakistan. Other unnamed officials said it could be “groups of armed militants traveling by truck toward the war in Afghanistan.”

Former Director of National Intelligence Dennis Blair echoed this, saying that “armed men who we see getting into pickup trucks” were subject to being murdered by drone. (ProPublica on-going 2012-13 report, “Everything We Know So Far About Drones”)

In the frontier provinces in Pakistan, where most of the drone strikes take place, a large part of the adult male population carry weapons and pick-up trucks are a common means of transportation. USA Today reported that “most men” in those areas consider their rifle a necessity.

Former U.S. Ambassador to Pakistan Cameron Munter, interviewed by the Daily Beast website in November 2012, revealed the real targeting criteria: “A male between the ages of 20 and 40.”

One official told the New York Times of a grotesque “joke” making the rounds at the CIA that “three guys doing jumping jacks” constituted a terrorist training camp.

According to a May 2012 article in the same newspaper, the White House has found a way to downsize civilian casualties by simply classifying all males of “fighting age” killed in drone attacks as “militants.”

While the government works hard to cover it up, the vast majority of those killed by drone strikes are non-combatant civilians. A 2012 joint study by New York University and Stanford titled “Living Under Drones” begins:

In the United States, the dominant narrative about the use of drones in Pakistan is of a surgically precise and effective tool that makes the US safer by enabling “targeted killing” of terrorist, with minimal downsides or collateral impacts.

This narrative is false.

The number of “high-level” targets killed as percentage of total casualties is extremely low—estimated at just 2%.

That drones are instruments not just to kill but also to terrorize the population is made clear by another section of NYU/Stanford report:

Drones hover twenty-four hours a day over communities in northwest Pakistan, striking homes, vehicles and other public spaces without warning. Their presence terrorizes men, women and children, given rise to anxiety and psychological trauma among civilian communities. Those living under drones have to face the constant worry that a deadly strike may be fired at any moment, and the knowledge that they are powerless to protect themselves. These fears have affected behavior. The US practice of striking one area multiple times [the so-called ‘double tap’ strike –RB] and evidence that it has killed rescuers makes both community members and humanitarian workers afraid or unwilling to assist injured victims.

Drones are lethal weapons of war, but what makes them particularly important to the Pentagon and the government as a whole is their political value: the casualties are all on one side. The drone operators are far from the “battlefield.” They  trigger the missile attacks  remotely, sitting in front of computer screens in darkened rooms at bases in the U.S. and secret locations around the world.

The U.S. government’s drone program serves the same general purpose as gunboat diplomacy did in an earlier time, extending domination over countries around the world.

While drones used by police agencies inside the U.S. are not yet armed  with Hellfire missiles (so far as we know), their numbers are growing. At least ten drones are deployed by the Border Patrol, and many police departments are seeking them for use in highly intrusive surveillance.

The struggle against the use of drones as both instruments of targeted killing and surveillance is an integral part of the people’s movement against war, racism and repression.

That’s what makes the April 13 march on the White House and protests in other across the country to demand "U.S. Drones Out of Africa, Asia, the Middle East and Everywhere!" so critical.
We must stand together against these outrages!

If you have any questions or need more information, please feel free to call me at the ANSWER office in San Francisco at 415-821-6545, or email us at [email protected].