Since the day that he announced his presidential campaign in 2015, Donald Trump has demonized immigrants — especially those from Latin America — using the most vile and bigoted rhetoric. Whipping up an anti-immigrant hysteria in many parts of the country was a key factor in Trump’s election. Now he is threatening to turn the guns of the U.S. army on terrorized and impoverished men, women and children from Central America.

Immigrants and refugees are not the enemy. The people in the caravans are fleeing unlivable conditions and chaos largely caused by the same U.S. ruling class, which imposed coups, interventions and free trade agreements on their countries.

Multinational corporations and government policies are responsible for outsourcing, stretched social services and stagnant wages in the United States — not immigrants. Trump’s false presentation and his administration’s extremely repressive actions have made immigrant and refugee rights a major issue of the day. 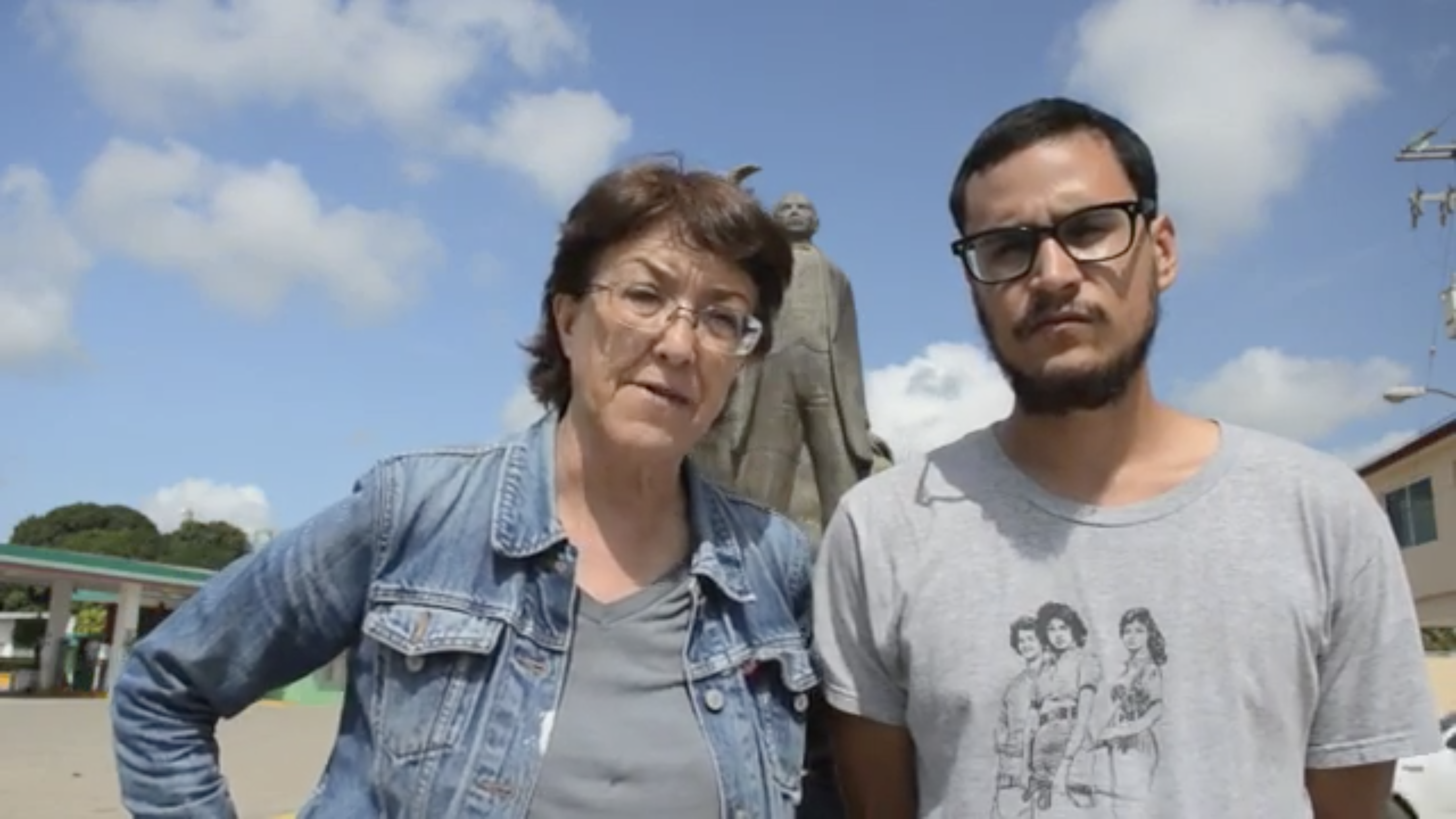 On November 25, ANSWER chapters in more than 25 cities joined the National Day of Action in solidarity with the caravan of thousands of Central American refugees. As documented by ANSWER activists Adan Plasencia and Gloria La Riva (right), who spent a week with them in Mexico earlier this month, the caravanistas are desperately poor and risking their lives to escape violence in their home countries of Honduras, El Salvador and Guatemala.

Immigrant rights are just one of the many, many struggles that the ANSWER Coalition has been engaged in this year. ANSWER has organized or participated in scores of activities in the Bay Area and hundreds nationally in 2018. 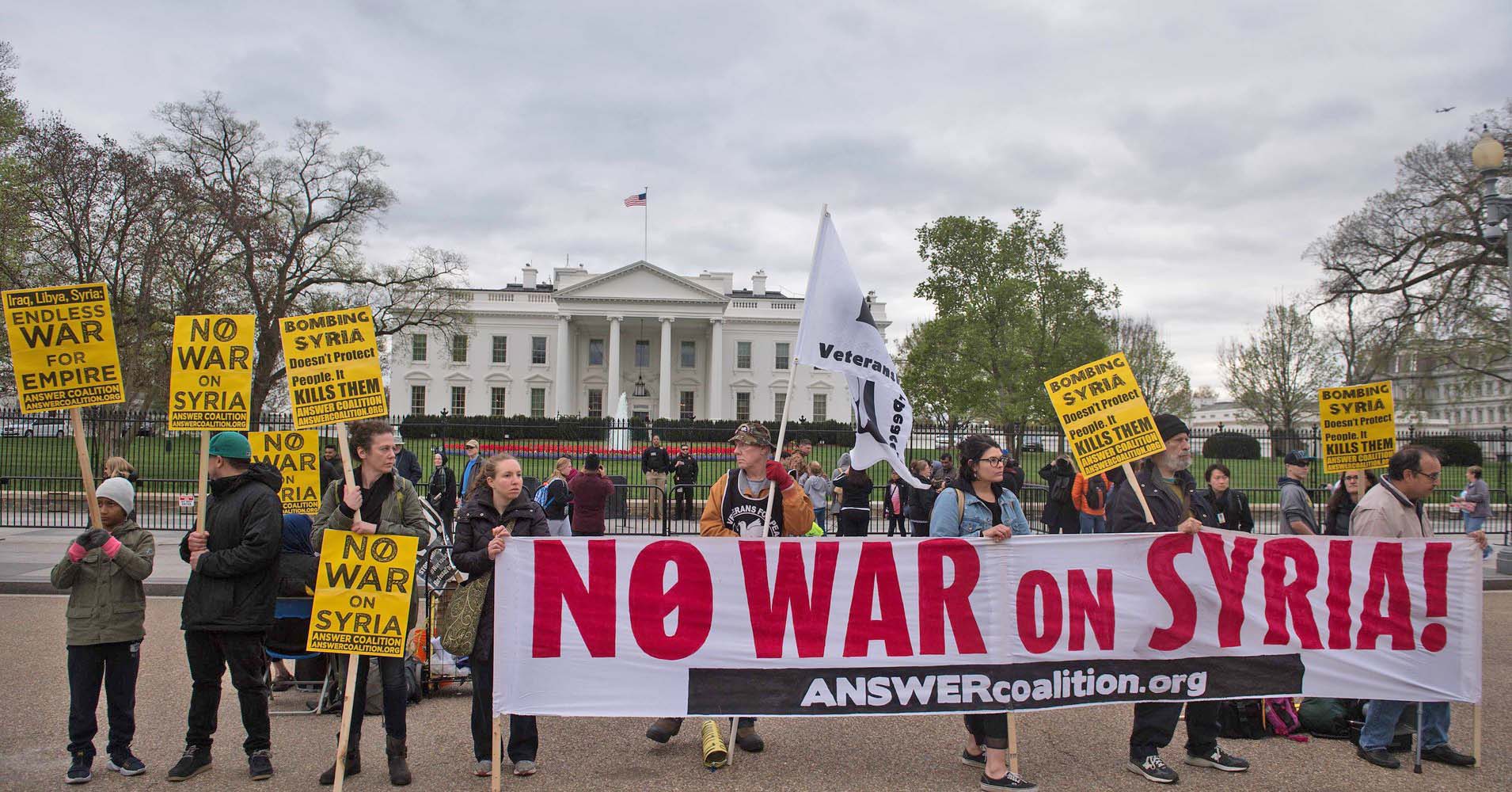 On April 14, ANSWER called an emergency protest of Trump’s air strikes in Syria in cities across the country, and the next day helped to mobilize for and provided sound for the Spring Action 2018 against U.S. Wars in Oakland. ANSWER chapters have organized or joined demonstrations against the U.S./Saudi war on the people of Yemen and demanded an end to the blockade that has put more than half of the Yemeni population of 28 million people in imminent danger of famine. 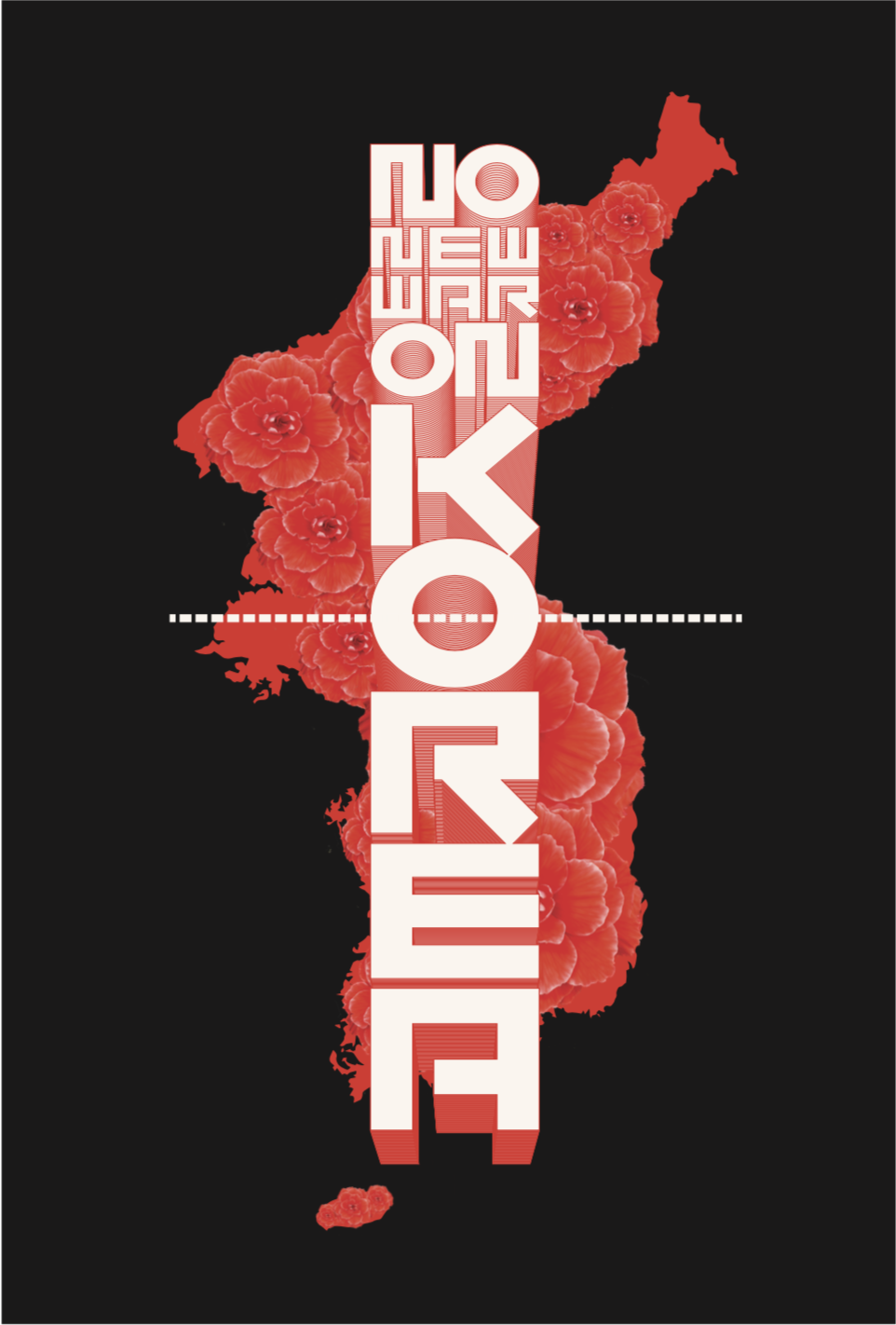 We have sponsored many forums and a major teach-in at UCLA on the situation in Korea and the threat of a new U.S. war. In October, ANSWER joined in the Women’s March on the Pentagon initiated by Cindy Sheehan. We spoke out in many interviews and statements against Trump’s illegal withdrawal from the Joint Comprehensive Plan of Action agreement with Iran.

To continue the vital work of building the people’s movement — the real resistance — we need your support. Please give what you can today. All donations to the Progress Unity Fund are tax-deductible to the full extent of the law.

ANSWER has been in the streets in solidarity with the Palestinian people’s struggle for justice and self-determination: From demanding the freedom of young Palestinian activist Ahed Tamimi, to emergency response protests in solidarity with the people of Gaza, to disrupting the appearance of war criminal and ex-prime minister Ehud Barak, and protests at the annual meeting of American Israeli Political Action Committee. In the Bay Area, many of these actions have been organized by the Palestine Action Network, of which ANSWER is a part. In August, we organized the showing of the film, “Killing Gaza,” with the filmmakers Max Blumenthal and Dan Cohen. 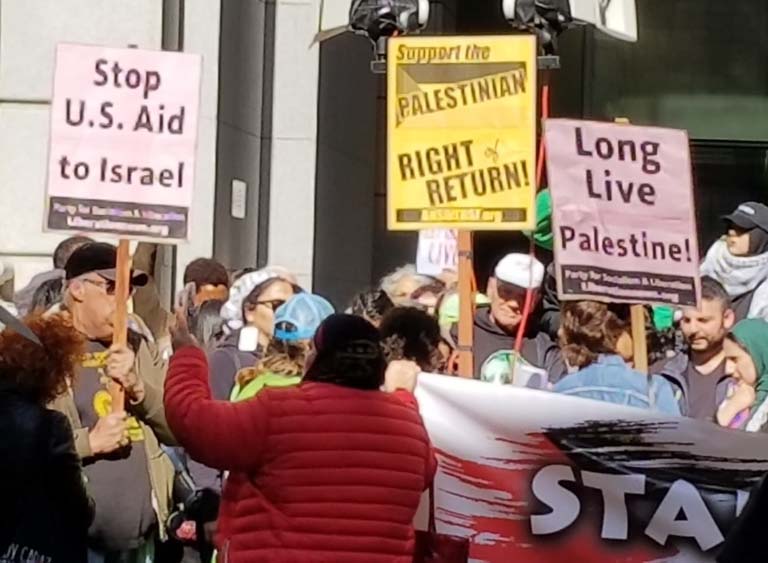 In June, ANSWER joined with Greenaction and other organizations to protest the appearance of then administrator of the EPA, the infamous Scott Pruitt. In September, we marched with 30,000 people in San Francisco demanding, “System Change, Not Climate Change.”

ANSWER has been very active in the movements against racist police brutality and mass incarceration, in a country which leads the world in both absolute and relative numbers of people behind bars. We supported the National Prison Strike in August, co-sponsored protests and public meetings demanding justice for Mumia Abu-Jamal, Leonard Peltier, Kevin Cooper and others unjustly imprisoned, joined in the “No New Cops or Jails” protest in October, and marched against the police killing of Stephon Clark, Laquan McDonald and many others. 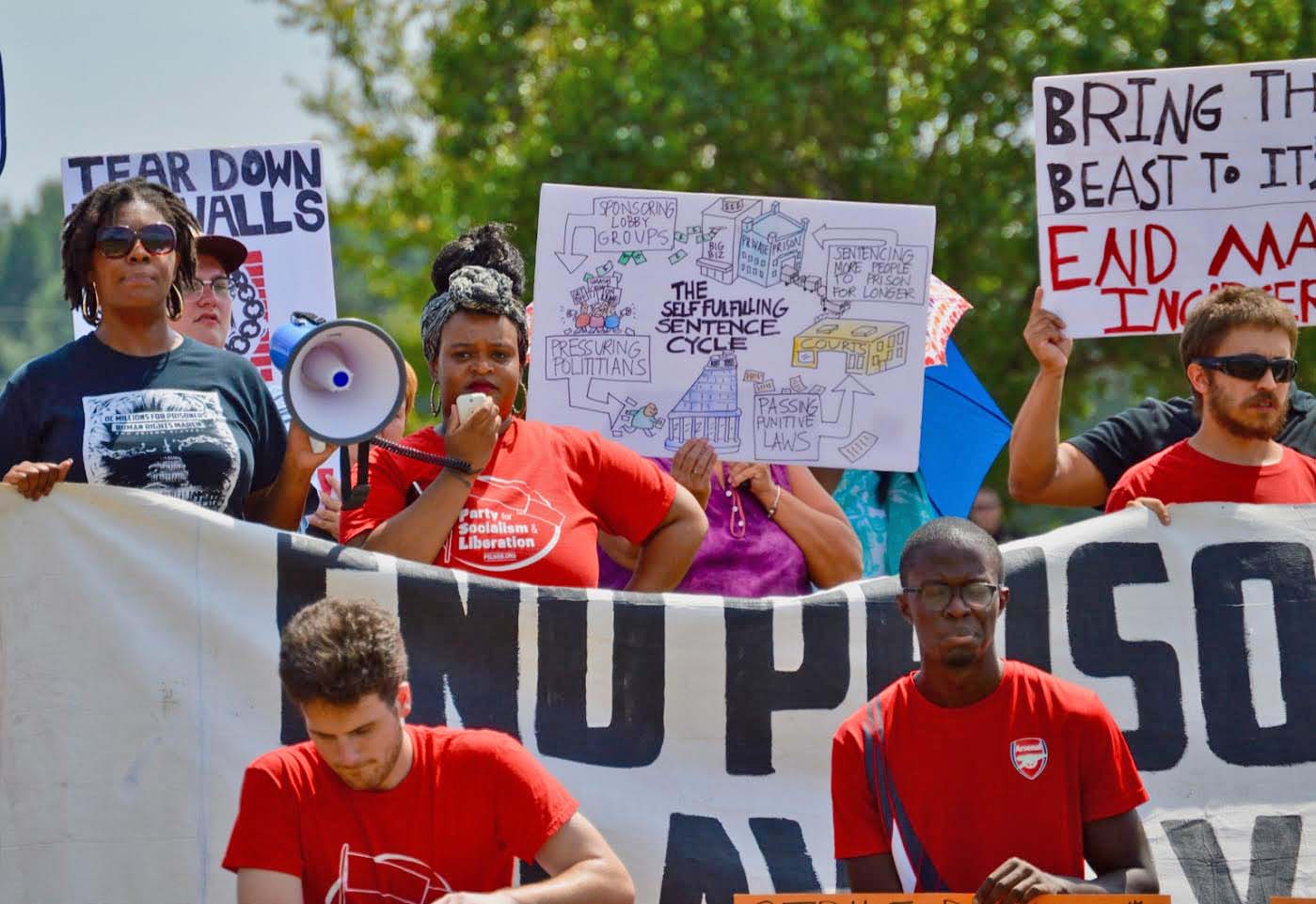 In August, when the Nazis, Klan and other similarly despicable groups called for a racist demonstration at the White House on the anniversary of the Charlottesville, Virginia, fascist mobilization where Heather Heyer was murdered, ANSWER initiated the call for a massive rejection of the fascists. The rally in front of the White House on August 12 was an amazing demonstration of strength and unity. More than 15,000 people gathered in Lafayette Park chanting, “No Nazis, No KKK, No Fascist USA”.

It was a remarkable demonstration of unity from many communities: Black, Latino, Asian, Arab and white, women, LGBTQ people, young and old. All stood together to condemn the Nazis and KKK, who ended up with less than 20 in their heavily police-protected contingent. As it became clear that the anti-fascist demonstration was rapidly growing in the days leading up to August 12, the Nazi/Klan ranks correspondingly shrank. We believe that what happened in Washington, D.C. in August showed once again that mass mobilization is the key to defeating the fascists. 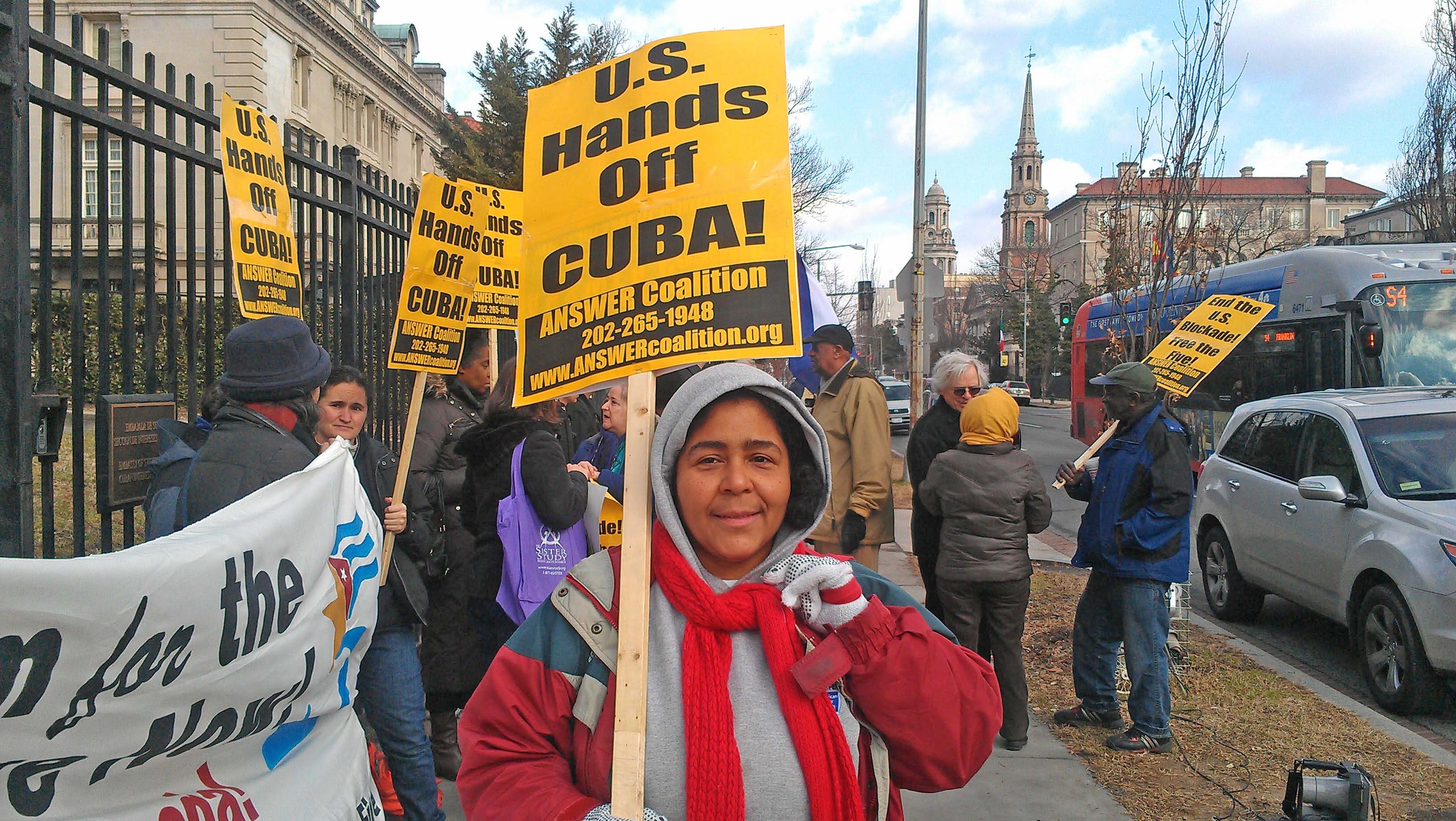 ANSWER activists traveled to Venezuela and Cuba, reporting on the reality of the situation in those countries, as opposed to the pervasive lies and deception from the corporate media. The Cuba and Venezuela Solidarity Committee of ANSWER initiated rallies and forums on Venezuela, helped organize a protest of election fraud in Honduras, and sponsored a forum, “Colombia: Struggle for a Lasting Peace,” with Colombian union leader Nidia Quintero, among other activities.

ANSWER joined in many actions demanding the rejection of extreme-rightist and misogynist Brett Kavanaugh to the Supreme Court. In many cities from coast-to-coast, ANSWER chapters initiated or participated in demonstrations calling for shutting down ICE and ending the attacks on immigrants.

And there has been much more in the last year.

Our San Francisco office has hosted activities of many community groups including American Indian Movement-West, Labor Committee to Free Mumia Abu-Jamal, California for Prop 10, Bay Area Latin America Solidarity Coalition, and many others.

I believe you are fully aware that we face dire problems on multiple fronts. The need for a strong people’s movement has never been greater. There is no other force that we can truly rely upon. ANSWER is growing in numbers of organizers and geographically, but there is an urgent need to do much more, and that takes activism, organizing and funds.

We need your financial support today. Please make as generous a tax-deductible donation as possible.